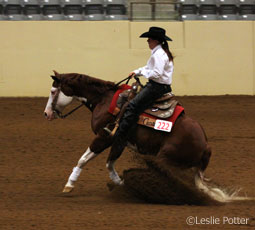 The National Reining Horse Youth Association (NRHyA) offers members an online program that rewards youth for their involvement outside of the show arena. The Varsity Reining Club (VRC) awards 13 scholarships collectively totaling $5,000 to be distributed to the top point-earning individuals in each age group. Over 80 youth participated this year in the VRC in 2012; Amy Stoney and Katya Koperski are receiving special recognitions as “Youths of the Year” for earning the most points in their respective age groups.

Youth members are awarded points though submissions of activities in the following categories: philanthropy, creativity, publicity and academics. Subcategories help define each submission such as photography, fundraising, community service and report back. Find out more at NRHyA.com.

Junior Varsity Youth – 13 and under