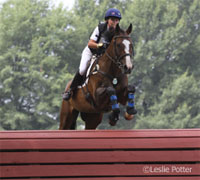 Eventing moved a step nearer to achieving an international vision for the sport when National Safety Officers (NSOs) from 22 nations were able to pool ideas and experiences at their sixth annual Risk Management Seminar, which was hosted by the Italian Equestrian Federation in Rome on January 26 and 27.

The NSOs were shown a DVD highlighting good and bad techniques in cross-country riding. The DVD, which has been two years in the planning, has been painstakingly put together by Great Britain’s NSO Jonathan Clissold, who was a course-builder at the London 2012 Olympic Games, and international coach Nick Turner of Great Britain. It will undergo some fine-tuning and will be used as a guide for Officials across the world later this year.

“We need to share a vision of the pictures we want of our sport,” explained Guiseppe della Chiesa, chairman of the FEI Eventing Committee. “We need to remind riders and trainers of the direction the sport should be going in, but we also need to have something that shows what we mean by this.

“Of course riders should wear crash helmets and back-protectors to minimize risk of injury, but it is much better to learn to ride the horse in such a way that the risk of accidents can be minimized. This DVD will explain what are both acceptable and unacceptable styles of riding and control of the horse.”

His words were echoed by Italian hero and 1964 Olympic champion Mauro Checcoli.

“There are two types of safety,” said Checcoli. “Passive safety (related to cross-country design) and active safety (the quality of horse and rider training), which is the most important.

“I am a pure example of the Caprilli school of equitation, which was based on teaching the horse to be technically correct over a jump and solve the problems. The aim is for the rider to be completely still and to be able to rely on the horse because they will have trained properly together. Horses do not want to fall and have a strong sense of self-preservation.”

Peter Whitehead of Great Britain, chairman of the FEI Medical Committee, spoke about the need for awareness among Officials and riders of the potential dangers of concussion.

Dr. Whitehead’s committee will be providing advice to officials and event organizers. “The medical officer’s job has been made much easier by the FEI’s one fall equals elimination rule,” he said. “I once saw a rider come off and, in the initial assessment, there were no signs of concussion yet 10 minutes later she was not making any sense. It’s not unusual to see a rider get straight up and run after their horse and seem perfectly all right.

“The important issue is to promote officials’ awareness of potential concussion because, obviously, the event medical officer will not be in a position to see all falls. If someone is concussed–or is suspected of being concussed–they should be removed from the competition and they should not drive home. It is important that all National Federations are talking the same language on this.”

Other issues discussed by NSOs included national qualifying procedures, air-vests, medical cards, frangible devices and the rise in arena eventing competitions. Philine Ganders of Great Britain provided food for thought with her presentation on the cross-country style competitions run by the German Equestrian Federation – last year some 4,000 riders participated in 223 competitions. Style competitions were part of the cross country training that would generally improve riding and, ultimately, safer riding.

“We saw the good results from these competitions,” said Swedish delegate Lars Christensson. “Our Swedish riders who had seen them in Germany thought this was a good way forward for risk management and for learning to ride correctly. So far, our experience is that the classes are excellent. The judges’ role is important, however, and they need to understand what they’re looking for.”

“The gathering of statistics is improving all the time, and that gives us more strength,” commented Guiseppe della Chiesa. “After 2004, the rate in falls began to decrease and this is now flattening out, which tells us that we must continue to be vigilant.”

Delegates, especially those from the smaller eventing nations, reiterated the value of this annual exchange of ideas. Roger Haller of the United States, a technical delegate and course-designer who was attending the seminar for the first time, commented, “I see a real evolution in the sport here and I’m impressed with the way the statistics have come on.”

Fellow technical delegate Mike Tucker of Great Britain, who has been closely involved with risk management in the sport for more than 12 years, agreed.

“It’s been a tough road, but what I see today is fantastic,” said Tucker. “There is so much here for our wonderful sport in the future, so keep it up. Everyone has worked very hard.”