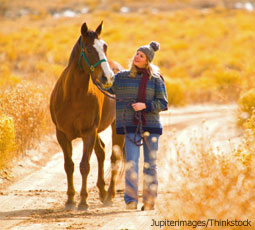 Does your horse come running when he hears your voice, but ignore your friends when they call to him? Does he see you from across the field and pick his head up to watch you, but keep grazing when a stranger walks through the gate?

Research published in 2012 suggests that horses, like humans, recognize their non-equine companions through a combination of senses, specifically sight and sound. Horses learn to recognize and distinguish between multiple human handlers through auditory and visual cues, which is the same way they distinguish between other horses in their herd.

“When we hear a familiar voice we form a mental picture of who spoke,” explains lead researcher Dr. Leanne Proops. “We match visual and auditory cues to recognize specific individuals. Previously we showed that horses also identify other horses cross-modally. We now demonstrate how flexible this ability is by showing that horses can also recognize humans in this way, despite people looking and sounding very different [from horses.]”

Dr. Proops and her co-researcher, Dr. Karen McComb, both of the University of Sussex in the United Kingdom, observed domestic horses and their reactions to different people. The researchers played recordings of human voices, one familiar to the individual horse and one unfamiliar, while the familiar and unfamiliar human stood on either side of the hidden speaker from which the recording was played. The horses appeared more interested when the familiar voice was played, looking more quickly and for a longer duration at the familiar human upon hearing his or her voice.

In the second stage, the horses were tested to see if they would distinguish between the voices of two people who were both familiar to them. The researchers found that horses could match a human’s voice with the sight of him or her, indicating that horses use a multi-modal memory, or one involving multiple senses, to recognize an individual.

To horse owners who see their horse come running upon hearing the voice of the friend who always has carrots, but turn tail and gallop away when the vaccination-wielding vet shows up, this information won’t come as a surprise. However, the study provides an interesting insight for researchers uncovering the mysteries of interspecies interactions.

Further Reading
How Do Horses See the World?
Recognizing Learning Ability in Horses 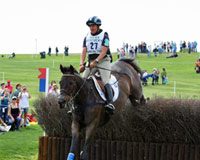