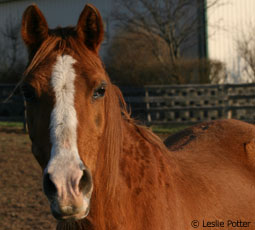 Ever hear of curcumin? It’s the active ingredient in the spice, turmeric, which has been used for centuries in Indian cooking, as well as in Ayurvedic medicine. It exhibits anti-oxidant properties (neutralizing damaging free radicals), and has been used to treat a long list of conditions, including diarrhea, respiratory infections, dermatitis, and even cancerous tumors.

Most notably, curcumin reduces inflammation and pain by inhibiting the cyclooxygenase enzyme 2 (COX-2), while maintaining COX-1 enzymatic function. That’s good news, because the COX-1 enzyme protects your horse’s stomach lining. COX-2 inhibition is a far better route to take for pain control than the more commonly used non-steroidal anti-inflammatory drugs (NSAIDs) such as phenylbutazone (bute), flunixin meglumin (Banamine), or aspirin; these inhibit not only COX-2 enzymes, but also the protective COX-1 enzymes. Firocoxib (known as Equioxx for horses and Previcox for dogs) is an NSAID that only inhibits the COX-2 enzyme, offering a safer option for horse owners. But curcumin supplementation offers a natural approach that can be highly effective and far less costly.

Osteoarthritis is a common source of pain for horses. This disease is characterized by a progressive deterioration of joint cartilage, making it less able to protect the joint against friction. The underlying cause of pain is due to a release of cytokines and reactive oxygen species — inflammatory substances that can lead to further degradation of joint tissue. There are many joint supplements on the market designed to slow down cartilage loss, increase production of lubricating synovial fluid, and reduce pain. Curcumin is not typically added to these joint supplement preparations. Furthermore, it can be a natural alternative to intra-articular hyaluronic acid or polysulfated glycosaminoglycan (PGAG) injections.

What is Turmeric/Curcumin?
Turmeric is derived from the underground stems (rhizomes) of the plant Curcuma longa, a member of the ginger family. It has the familiar yellow color of Indian curry and American mustard. Curcumin is the biologically active phytochemical found in turmeric. Chemically known as diferuloylmethane, with a molecular formula C21H20O6, it has been shown to have dramatic health benefits. Most research involving curcumin has been done with humans. However, researchers1 from the United Kingdom and Germany recently revealed that curcumin significantly reduces the inflammatory pathways found in horses suffering from osteoarthritis. Thomas Schell, DVM (developer of Cur-Ost), has also done extensive research2 on the use of curcumin’s therapeutic action on equine osteoarthritis. Using Quarter Horses, Morgans, Thoroughbreds, Arabians, and Paso Finos, all with varying degrees of lameness from degenerative arthritis, he found improvement when comparing lameness scores before and after administration of a nutritional formula containing curcumin, as well as vitamins E and C.

Safety and Dosage
With humans, dosages as high as 12 grams per day3 for a three month period have been shown to be safe. For longer term supplementation, 500 mgs per day is more readily accepted. This amounts to ¼ teaspoon of turmeric.

An appropriate dosage for horses has not been established, though one tablespoon per day works well as a maintenance dose. If diarrhea or changes in appetite occur, discontinue use. Do not administer NSAIDS along with turmeric or curcumin-containing compounds. Also, keep in mind that turmeric slows blood clotting and therefore should be discontinued if you are planning any surgical procedures.

Personal experience
My off-the-track Thoroughbred suffers from osteochondral fragments (bone chips) in his fetlock joint. Originally I treated him with a low dose of bute, along with lecithin4 to prevent gastric ulcers, but I switched to feeding turmeric at a dosage of two tablespoons per day. I kept feeding lecithin as a precaution. He is doing just as well as he did with bute, and his limping has not returned. He runs in the pasture with ease. After two months on this two-tablespoon therapeutic dose, I have decreased it to one tablespoon per day and will soon reduce it further, relying on more only as needed. I have found it to be palatable and easy to mix with feeds.

Summary
Take a look at what curcumin has to offer. Turmeric is easy to get in bulk at whole food stores or on line. It may just be the extra ingredient your horse needs to be comfortable and pain-free.

Juliet M. Getty, Ph.D. is an internationally respected equine nutritionist available for private consultations and speaking engagements. Visit her website for more information at www.gettyequinenutrition.com. Meet Dr. Getty this April 11-14 at Equine Affaire in Columbus, OH, where she will be presenting four seminars.