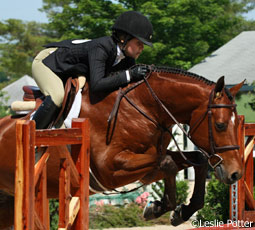 The NCEA operates under the National Collegiate Athletic Association (NCAA) as an emerging sport and is separate from the Intercollegiate Horse Show Association, although some schools may have teams competing in both formats. Unlike IHSA, NCEA teams are restricted to women.

In NCEA competition, western riders compete in horsemanship and reining while English riders are divided into hunt seat equitation on the flat and over fences divisions. For the national final, the teams are ranked by a selection committee in a 12-team seeded bracket similar to the system used by the NCAA basketball championship.

The dominant western team, Texas A&M, will be back to ride for a fifth consecutive national championship behind number-one seed, Oklahoma State. On the English side, Baylor is the top-seeded team and will be defending its 2012 championship title. Competitors will ride horses they have never ridden before and will have only a few minutes to become acquainted with their mount before entering the ring.

The competition format is a head-to-head, where a rider from each team competes on the same horse. The rider earning the highest score on that particular horse wins the point for their team. At the end of the competition, the team with the most points wins the competition. The horse and rider match-up is determined by a random draw. Prior to their competition ride each competitor is given a four-minute warm-up (five minute for Reining) to familiarize themselves with the horse and prepare for their competition ride. This format of competition was developed to level the playing field between riders and to allow each rider the same opportunity on the same horse. There is only one elite level of competition for the four events.

The NCEA National Championship will be broadcast live beginning with tonight’s opening ceremonies and continuing through the end of competition on Saturday. To watch the video, visit VarsityEquestrian.com.