Home Horse News Andrew Nicholson in the lead after day one of 2013 Rolex Kentucky...

The first day of dressage got under way at the Rolex Kentucky Three-Day Event under sunny skies as 23 horse and rider pairs performed their tests. After being fifth to go in the morning, Andrew Nicholson of New Zealand and the 11-year-old Thoroughbred gelding Calico Joe scored a 40.8 that couldn’t be topped for the rest of the day.

When he won last September’s Land Rover Burghley Horse Trials in England, Nicholson scored the first of three competitions in eventing’s Rolex Grand Slam. Now in the early lead at Rolex, he’s sitting in a great position to take the second leg. The Grand Slam requires a rider to win Burghley, Rolex Kentucky and the Badminton Horse trials (also in England) consecutively, in any order. All three events are CCI**** level, the most difficult the sport has to offer. Any rider to do this wins a bonus of $350,000 in addition to the prize money given in each event. The only rider to accomplish this so far was Great Britain’s Pippa Funnell in 2003.

“I came out here with [the Grand Slam] in mind, but I will worry about [Badminton] after this week,” said Nicholson. “Calico Joe had an intense year last year doing three four-stars, and it showed today when he went down the ramp into the arena and was very cool. He gave me 100 percent the whole test–I maybe let him down a couple of times.”

Sitting in second place at day’s end on a 44.2 was a familiar face, the USA’s own Becky Holder. Usually she is atop the leaderboard with her crowd-favorite Thoroughbred, Courageous Comet, but since his retirement last year she has brought along another gray off-track Thoroughbred, the 14-year-old gelding Can’t Fire Me. At his first Rolex last year, Can’t Fire Me was pulled up for getting a bleeding cut on his knee shortly before finishing cross-country. This year, Holder is poised to have her newer mount fill in the rather big horseshoes of her beloved Comet. Comparing the two is like night and day.

“Teddy [Can’t Fire Me] is similar only in color [to Comet],” said Holder. “Teddy is much bigger. Comet is a ham–he loves attention. The bigger the crowd, the better he does. But Comet has to have everything go perfectly, whereas Teddy is more of a scrapper.”

Somewhat of a surprise to edge out two-time Rolex winner William Fox-Pitt of Great Britain for third place was first-time Rolex rider Shandiss McDonald of Canada. She scored a 45.7 aboard Rockfield Grant Juan, an 11-year-old Irish Sport Horse gelding. Canadians have done well in the past at the Kentucky Horse Park, most notably winning team silver in eventing at the Alltech FEI World Equestrian Games in 2010.

“[Rockfield Grant Juan] is a very big horse, about 18 hands,” said McDonald. “He has such a good mind and attitude and is a pleasure to ride. This is my first time here; I’ve been wanting to come for so long, and I was so happy my horse was steady in the ring with so much atmosphere. He was relaxed and willing and did his job.” Many riders weren’t so lucky, with their horses looking fresh and excited in front of the crowd, more eager to head onto the cross-country course than to demonstrate their obedience in the sand box.

Stay tuned Friday to www.rk3de.org for more dressage live scoring as the second half of the field performs their tests. As always, the cross-country jumping action will take place on Saturday, with the final standings decided during Sunday’s show jumping round.

TOP 5 AFTER DAY ONE:

Keep up with all Rolex coverage at HorseChannel.com/Rolex2013. 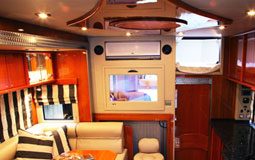 Horses can Travel to Shows in Luxury, Style