Home Horse News Andrew Nicholson in first and second place after cross-country at the 2013...

A number of defections from the top of the leaderboard on cross-country day at the 2013 Rolex Kentucky Three-Day event put New Zealand’s Andrew Nicholson into both first and second place going into show jumping on Sunday. Riding early in the day aboard Calico Joe, Nicholson put in a seemingly effortless double-clear round with no jumping or time penalties. His second mount, Quimbo, also blazed around the course full of run in the afternoon.

“I wasn’t sure if [Quimbo would] have enough gallop for the end,” said Nicholson. “He has lots of warmblood in his breeding, but when I told him he needed to pick up the pace, he was happy to do it all the way to the finish.”

American rider Buck Davidson moved all the way from eighth to third. “[Ballynoe Castle RM] has been an amazing horse,” said Davidson. “His whole career has been wrecked by [bad luck]–a stop at WEG at the sunken road; he had a dog chase him at Rolex the year before that. He does everything I ask of him and shows up every single day.”

“Very sadly [overnight leader Chilli Morning] had a stop going into the first water,” said Fox-Pitt. “Who knows, maybe he just over-jumped slightly the fence before, then shut down mentally as he came to that rail. For him there’s no point in carrying on; he’s not [a green horse that’s] here for the experience.”

Fox-Pitt’s other mount, Seacookie TSF, moved up from tenth to fourth after a double-clear run. They were the first to go on cross-country Saturday morning, giving the other riders a shot of confidence as Fox-Pitt put in a trademark world-class ride to make the course look effortless.

The day was a definite success for course designer Derek di Grazia; no horses or riders were seriously injured. The rides before lunch were particularly smooth, when only three of 22 riders had any jump penalties.

“It was a nice, big bold course to ride,” said Nicholson. “The horses could see what they were going to jump, the footing was in perfect condition, and the air temperature was ideal for cross-country. It gave the horses more jump and more gallop than other times.” Although overcast skies gave way to light rain late in the afternoon rides, the footing wasn’t affected as the riders had feared when heavy rains were initially forecast.

Show jumping tomorrow will conclude the event on Sunday, with Nicholson having a one-rail cushion on both of his horses ahead of third-placed Buck Davidson. “For Calico Joe [show jumping is] not his strongest phase, although he’s surprised me a few times when he’s jumped clear rounds,” said Nicholson. “Quimbo is a very nice jumper if I ride him half right.”

If he is able to hold onto his placings tomorrow, he will be the second rider to finish 1-2 at Rolex, after Mary King pulled off the feat with Kings Temptress and Fernhill Urco in 2011.

Follow live scoring tomorrow at www.rk3de.org and stay tuned for a full wrap-up on Sunday at HorseChannel.com/Rolex2013. 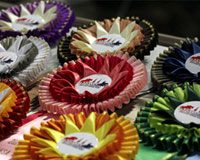 Centenary College and Berry College are victorious at the 2011 IHSA...