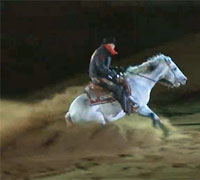 For the second time in three years, Shane Brown won the World Championship Freestyle Reining tonight at the Kentucky Horse Park. He rode Shepherd Star to the title, receiving 228 points from the three judges.

Brown’s score put him just 1 point ahead of three riders who tied for second with a score of 227—Aaron Ralston on Blue Taris Glo, Drake Johnson on Sonic Chic Dream, and Pete Kyle on A Ruf Gal.

Brown, of Elbert, Colo., rode the gray stallion to country star Montgomery Gentry’s haunting ballad “Gone.” It was a freestyle he’d also used to win at the Dodge Invitational Freestyle in Denver in 2008. His wife, Stacey, wrote the introduction that the announcer read before he entered the ring, in which he longed for the days of low-level technology, remembering typewriters and rotary phones.

“The song has a lot of speed up and slow down, and it fits this horse—he’s very powerful, so I didn’t want a soft and mushy song for him,” said Brown.

Ralston rode to the 2012 smash hit “Gangnam Style,” Johnson rode to “Amazing Grace,” and Kyle rode with a ring full of about 30 dancing fans to “Harlem Shake.”

“I went to Target today,” said Ralston, to explain his pink polka-dot outfit and his extra-large pink sunglasses. “It’s hard for me to do anything that’s real serious, and some friends and clients talked me into the song.”

Johnson said that he’d long wanted to perform a freestyle to “Amazing Grace,” and “I finally had the horse that had the style and the elegance to make it look smooth and pretty.”

Kyle was inspired by his children’s high school. “I saw them do the ‘Harlem Shake,’ and I thought it was just too fun,” said Kyle. So I asked a friend who works for Rolex Kentucky to recruit people from the stands. I didn’t know how many she’d gotten until I walked out there, and I thought, ‘Holy smokes, is there anybody still in the stands?’”

Kyle won the World Championship Freestyle in 2011 on A Ruf Gal.

The evening also featured four international event riders competing in their own division on horses loaned to them by reining competitors. Shepherd Star emerged the winner of this division too, scoring 211.0 points with Allison Springer.

Springer said that she enjoyed trying reining for the first time. “I really didn’t know what I was going to have to do” until about an hour before the competition began, she said.

“I got nervous because I didn’t get to practice until after Shane rode him, so I didn’t mess up his horse, I’m sure. But that made me really nervous. I almost fell off the horse in my first halt in practice,” said Springer.

She was amazed that Shepherd Star could interpret her muddled aids. “It reminded me of when you were growing up and all the other girls would say, ‘Oh, she just has a wonderful horse. She can’t really ride.’ Well, that was me tonight!” said Springer with a laugh.

For the third consecutive year, the American Quarter Horse is the “Official Breed of the Kentucky Reining Cup.” The competition is also sponsored in part by Paul Miller Ford.

The Kentucky Reining Cup is produced by Equestrian Events, Inc. (EEI), a non-profit charitable Kentucky corporation that was established initially to produce the 1978 World Three-Day Event Championships at the Kentucky Horse Park. Following the success of those championships, EEI established an annual event which quickly evolved into what is today the only Four Star three-day event in the western hemisphere, the Rolex Kentucky Three-Day Event. EEI started producing the Kentucky Reining Cup in 2011.

Full results and further information on the 2013 Kentucky Reining Cup is available on line at www.KentuckyReining.com.

Get Started in Extreme Cowboy Racing