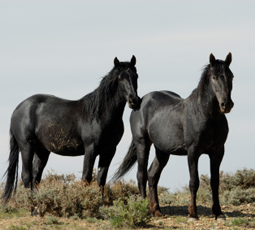 The statistics currently kept on America’s wild horse herds are potentially inaccurate. The management process of rounding up and holding Mustangs is actually causing the population to grow faster than it would naturally. And the public is really not happy with the Bureau of Land Management’s (BLM) Wild Horse and Burro program.

These are some of the findings that came out of a scientific review of the BLM’s management practices that was released this week by the National Research Council (NRC). The review was requested by the BLM to help update the program for better sustainability and public acceptance while still accommodating the BLM’s need to carry out its duties of managing public lands.

In the report’s introduction, Guy Hughes Palmer, Chair of the Committee to Review the BLM Wild Horse and Burro Program, addressed the need to make drastic changes to the existing program.

“…it is clear that the status quo of continually removing free-ranging horses and then maintaining them in long-term holding facilities, with no foreseeable end in sight, is both economically unsustainable and discordant with public expectations. It is equally evident that the consequences of simply letting horse populations, which increase at a mean annual rate approaching 20 percent, expand to the level of ‘self-limitation’—bringing suffering and death due to disease, dehydration, and starvation accompanied by degradation of the land—are also unacceptable.”

Wild horse welfare advocates will likely agree with the NRC’s findings that the BLM’s current practices need a complete overhaul, although they may not agree with the reason why. While fans of the Mustangs have accused the BLM of “managing to extinction,” the report suggests that the current system actually harms the horses by increasing their numbers.

According to the report, the free-roaming wild horse and burro population of the western U.S. is increasing at a rate of 15-20% annually, and the BLM’s practice of removing horses from the range is part of the reason why. By artificially controlling the population on the range, the report states, the herds are kept at a level that is not “self-limiting.” In other words, without intervention, the wild horse population would grow to the point where there would be insufficient food and higher rates of disease, which would cause natural deaths. Because of the regular round-ups, the herds don’t reach that tipping point.

Additionally, the report states that while natural predators have an impact on wild horse herds in some countries, they are not a factor for American Mustangs. Wolf population in the wild horses’ range have been disrupted by human activity to the point that they do not pose a significant threat. The other potential predator, mountain lions, do not hunt in the open areas that wild horses roam because they tend to stay in areas with more tree cover than the Mustangs’ habitat.

The following are some of the findings and suggestions included in the NRC report:

“Science alone, even the best science, cannot resolve the divergent viewpoints on how best to manage free-ranging horses and burros on public lands,” says Palmer in the report. “Evidence-based science can, however, center debate about management options on the basis of confidence in the data, predictable outcomes of specific options, and understanding of both what is known and where uncertainty remains. I am confident that this study provides a centerpoint and hope that it will serve as a guide for the first step in the journey toward ensuring that genetically viable, physically and behaviorally healthy equid populations can be maintained while preserving a thriving, balanced ecosystem on public lands.”

To download the full report, visit the National Academies Division on Earth and Life Studies.