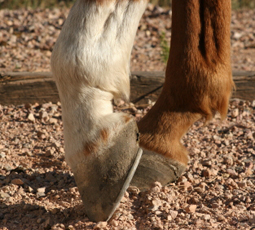 Laminitis is a horse owner’s worst nightmare. The debilitating condition has a long list of possible causes, and the reason for an individual case is often unknown. The effect is extremely painful for horses, and while it can be treated and horses brought back to soundness if it’s caught early, there is no cure and once a horse has been through one episode of laminitis, he’s more prone to it in the future.

Willowcroft Pharm, Inc., a company based in Colorado, has announced that they have a promising treatment for laminitis in an injectable drug they’ve developed called Laminil. If the drug receives FDA approval for use in laminitic horses, it could be the first and currently only commercially available treatment for the disease.

Laminitis occurs when the sensitive laminae inside the horse’s hooves become inflamed. The laminae serve the essential function of holding a horse’s coffin bone inside the hoof to the hoof wall. If left unchecked, the inflammation can progress and the laminae weaken, loosening their hold with the insensitive laminae of the hoof wall. When that happens, laminitis can become a case of founder where the internal structures of the hoof separate from the external structures and the coffin bone can rotate. This often leads to permanent lameness and in some cases, euthanasia is warranted.

Presently, the most widely accepted treatment for laminitis is cryotherapy–standing the affected hooves (typically the front hooves, but it occasionally occurs in just one hoof or all four) in ice water, slowing the inflammation. This treatment is most effective when the disease is caught early.

Laminil works by inhibiting the inflammatory response in the horse’s immune system. This prevents the destruction of the sensitive laminae that occurs with prolonged inflammation. The drug is injected into the vein of the fetlock joint with a tourniquet placed above it. This sends the medicine to the affected laminae. By blocking the inflammatory response, it halts what Willowcroft refers to the as the “laminitis cascade,” or the series of biological reactions that start as inflammation and can end up as a full-blown case of founder.

Laminil is currently being tested at veterinary facilities, including Lexington, Kentucky’s Rood and Riddle Equine Hospital. The success rate is reportedly 80% with no adverse effects.

Find out more at laminil.us.