As the final month of summer vacation season begins, kids across the country are enjoying their last weeks of freedom, earning their final summer-job paychecks, or rushing to finish (or start) their summer reading lists. For kids who show American Quarter Horses, however, the biggest celebration of the season has just begun.

2013 AQHYA World Show by the Numbers: 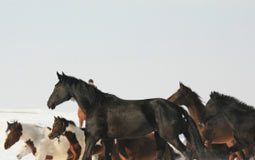