Home Horse Care Horse Behavior Is grooming better than treats for bonding with your horse?

Among the many benefits of regular grooming sessions with your horse is strengthening your bond. Equine pasturemates are often seen scratching each others’ backs in the act of mutual grooming, and research has shown that physical touch enhances bonding in many species. But does the idea of interspecies bonding through grooming hold up to scientific scrutiny?

Mutual grooming is a common form of social behavior between equine herdmates. Could a similar use of grooming help facilitate bonding between humans and horses? Photo: Leslie Potter
Researchers in France and Poland aimed to find out if grooming could help to facilitate horse-human bonding and equine learning. They compared this research against using a food reward, which past research has been shown to work for both bonding and learning in horses.

The researchers used 20 young Konik horses, a primitive breed from Poland. The horses were randomly assigned to either the food-reward group or the grooming-reward group. To test food vs. grooming as a tool to facilitate learning, the horses were trained for six days to stand still at a vocal command from the handler using rewards to mark the correct response. The duration of immobility was increased from five to 60 seconds as the horses progressed. The food-reward horses were given a piece of carrot for a correct response and the grooming-reward horses received a vigorous scratch on the withers, similar to how horses are known to bond with each other.

To test the effect of food and grooming rewards on bonding, the horses were also involved in a “motionless human test,” a standard test used to assess human-animal relationships. In this test, a person stood in the center of an area where the horses were free to interact—or not—with her. Researchers documented how long it took the horses to approach the human and how much time they spent within 0.5 meters of her.

By the end of the study, the food-reward horses were more likely to approach the human and spent more time near her. But there was no significant change in the same behaviors within the grooming-reward groups.

Of course, horse owners and trainers don’t only give treats to their horses or only offer a brief scratch on the withers; they feed their horses as well as provide extended grooming sessions, among other things. The researchers acknowledge that the combination of interactions that humans have with horses may lead to a horse’s positive association with grooming or petting. However, they also point out that while humans are a very tactile species, horses actually have limited physical contact with each other in their natural lives, and the assumption that they enjoy touch is probably a case of projecting our human feelings on to our animals. 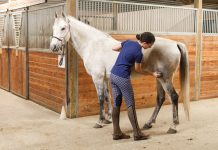 Tips for When a Horse Hates Being Groomed