When interacting with horses, will they respond better to a high-pitched voice, or low-pitched? Do they recognize what humans would consider to be a stern tone of voice rather than a soothing one? Most horse owners will report anecdotally that their horses know when they’re being scolded or when they’re being praised based on tone, and some will say their horse has a preference for a high- or low-pitched voice. But is there any proof?

Researchers at the University of Guelph in Ontario, Canada and Agrocampus Rennes in France performed a study to find out if different manners of speaking in humans made any difference in horse behavior. Their subjects were eight draft horses. Each horse was turned loose in a round pen for five minutes while researchers documented baseline statistics about their gait, head height, and ear and body position in relation to a human by the pen. The horses’ heart rates were also measured.

The greatest effect on heart rate occurred when the stern, low voice was played. This casued heart rate elevation, indicating that horses may, in fact, recognize a scolding tone.

“We’ve shown that horses do in fact display different physiological and behavioural responses to different tones and voice,” said Katrina Merkies of the University of Guelph. “So horses are able to discriminate between different tones or qualities of voice. However, it’s not clear if the horse is interpreting or responding to the tone of voice alone, or if it’s looked at in combination-both tone of voice and the human’s body language. Which is the more salient clue to the horse? That certainly warrants further study.”

This research was presented at the 2013 conference of the International Society for Equitation Science. 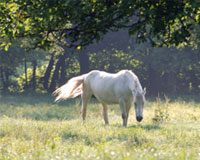 Standardbred Retirement Foundation seeks a new home for its horses