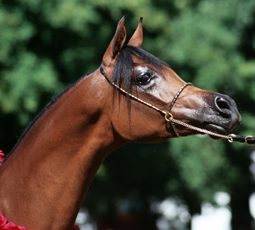 North America’s finest Arabian and half-Arabian show horses are in the city of Brandon, Manitoba this week for the Canadian National Arabian Championship. Entries at this prestigious show qualify to compete through earning points at A-rated Arabian shows or qualifying open shows.

This year’s show is the third to be held at Manitoba’s Keystone Center in Brandon, a small city in the southwest area of the province. The show will be broadcast to Arabian fans worldwide via Arabian Horse Global. Click here to view the live feed.

More than 700 horses are expected to compete this week, and as with all national Arabian shows, versatility is a hallmark of the event. While halter classes, in which horses are judged on their conformation, beauty and movement, is still one of the most popular divisions for Arabians, there are plenty of under-saddle classes where talented equine athletes and their riders will compete for championship titles.

Watch highlights from the 2009 Canadian National below.

On the western side, Arabians will compete in reining, trail, horsemanship and pleasure classes. English and sport classes include dressage, hunter/jumper, hunter pleasure, show hack, saddle seat and equitation. Driving classes, native costume, side saddle and liberty classes round out the event. For a full schedule of classes, visit ArabianHorses.org/CNL.

Once again, the Arabian Horse Association will be hosting Total Arabian Interactive & Learning (TAIL) programs at Canadian Nationals. Twice a day on Aug. 14 and 15, TAIL tours will give visitors a look at what goes on behind the scenes at a top-level Arabian horse show. Participants take a tour of the show grounds, watch classes with a knowledgeable host, and meet an Arabian horse. These tours are geared toward newcomers to the horse world including families and youth groups. To find out more about the TAIL experience at Canadian Nationals, click here.

The third leg of the Arabian Triple Crown is U.S. Nationals, which takes place from Oct. 18-26. Show season for North American Arabian exhibitors kicks off each year with the Scottsdale Arabian Horse Show in February.

More Thoroughbreds on the Way