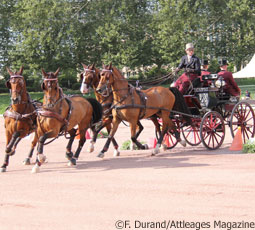 Chester Weber of the United States came out on top at the Driving test event for the Alltech FEI World Equestrian Games 2014 in Normandy, the third of the FEI disciplines to be tested this month. The American driver, who made a strong start with an impressive Dressage mark of 34.63 points, finished the three days on 108.24, over 17 points clear of runner-up Ludwig Weinmayr of Germany (125.54). Great Britain’s Georgina Hunt finished third with 132.76.

A total of 12 drivers and 60 horses representing seven countries – Germany, Great Britain, the Netherlands, Spain, Uruguay, the USA and host nation France – took part in the CAI-A4 event, which was run over three days at the Caen racecourse in Calvados, France, venue for next year’s driving competition at the Games.

The test event, which was supported by around 200 volunteers, received widespread praise from all the competitors.

“This is one amazing venue,” said Weber. “I’m impressed with all the work the organizers have put in it and with how horse-friendly they made it. It is positive for the sport and for the future and actually shows the way to go for other organizers.”

The marathon footing, made of very fine red gravel, earned special praise. “The carriage rolled by itself and the horses felt very good at the end of the marathon,” said Weber. “They finished in great shape and very fit and only light contact was required.”

Bettina de Rham, FEI Director of Driving, Vaulting, and Reining, expressed her satisfaction with the event. “Holding a test event in view of next year’s Games was essential, particularly at a venue which is new to driving,” she said. “It has been very successful and horse-friendly which is key for any FEI event. The Organising Committee have made a great effort and I would like to take this opportunity to congratulate and thank the numerous volunteers whose contribution to today’s success is very sincerely appreciated. We have of course identified details which will need fine-tuning but the overall impression is very positive indeed,” she concluded.

The driving test event, which follows successful tests in endurance and eventing, is the third and last to be held this year in the build-up to the Alltech FEI World Equestrian Games 2014 in Normandy. Test events in jumping and dressage will be held in the main stadium at Stade d’Ornano in June 2014. No discipline-specific test events will be held in reining, vaulting and para-equestrian, but all technical aspects will be trialled to ensure that the competitions in all the disciplines meet the same level of excellence.

The full results of the driving test event are available here. 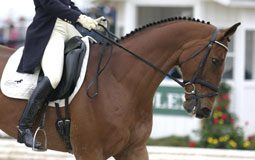