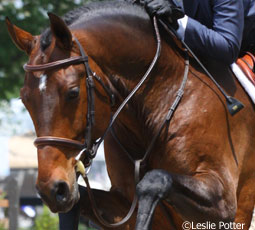 Whip, bat, stick or crop: whatever you want to call it, that hand-held equestrian aid has been a source of controversy for centuries. While many riders consider a whip to be a simple aid, others see it as a tool of abuse with the potential to frighten a horse into adhering to human demands.

An award-winning study in Australia looked at whether whip use in Thoroughbred racing had any correlation with race results. The researchers found that not only were whipped horses no more likely to win, but that horses actually ran faster when not being whipped.

The researchers who performed the Thoroughbred study concluded that whips may not be a necessary tool for jockeys, as some in the racing world had previously argued. But what about the sport of show jumping, where not only is speed a factor, but the possibility of a refusal is ever-present?

Researchers in the United Kingdom surveyed show jumpers to determine trends in whip usage and presented their findings at the 2013 International Society for Equitation Science conference. While their study did not examine whether horses experience pain or distress when ridden with a whip, it did uncover some trends about what types of riders are more likely to carry or use a whip, and how that affected their results.

The researchers concede that while whip use appeared to correlate with more faults in a round, there are many variables at play. Riders may only opt to carry a whip when riding a horse that requires “encouragement” and is already more likely to finish with faults. Furthermore, elite riders may be less likely to have or use a whip because they are more likely to be mounted on very athletic horses that don’t require supplemental aids.

British show jumping rules prohibit misuse or excessive use of the whip and specify that the whip should not be used more than three times after entering the arena. The researchers observed 38 instances where the whip was used excessively or inappropriately, but no riders were ever reprimanded for the rule violation.

With increasing scrutiny of all equestrian sports, show organizers and equestrian groups are aware of the need to protect horse welfare and present a positive image to the public. Creating and enforcing meaningful whip usage rules could be an important part of this continuing effort.