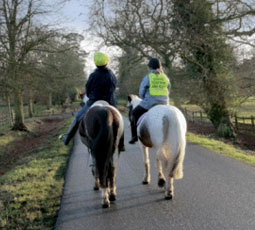 As summer winds to an end and the long daylight hours give way to earlier sunsets, many equestrians will have to start rethinking their routines. Work and school schedules don’t always allow for riding earlier in the day, and many horse owners don’t want to restrict all of their fall and winter riding to the arena. Many devoted riders who have to ride close to or across roads to get to their preferred trails will don brightly colored or reflective clothing to improve safety as the days get darker. But is that an effective strategy?

Researcher Rose Scofield from Duchy College in the U.K. conducted a survey of equestrians to find out if apparel choices made a difference in safety for those who ride on roads. Participants reported on any fluorescent or reflective clothing or equipment that they wore or put on their horses, and whether they had been involved in any near-misses with cars.

Most riders who returned the survey—60%–had experienced a near-miss in traffic. Most respondents also reported wearing bright or reflective gear. However, there was no significant difference in the likelihood of a near-miss between those who did wear bright or reflective equipment and those who didn’t, suggesting that even reflectors aren’t enough to get motorists to pay attention.

However, the survey did reveal that lights could be helpful for riders on roads. A large majority of respondents who wore some kind of lights when riding on the road never experienced a near-miss.

Traffic accidents can be devastating for horses and riders. Small LED lights designed for use by runners, cyclists and dog-walkers are inexpensive, widely available and can be easily adapted for equestrian use. Equestrians in most states are required to ride in the same direction as motorized traffic. Affixing a light where it will be visible to someone coming up behind a horse, such as the back of the rider’s jacket, could be a life-saving measure.

Road safety: is there a relationship between ‘near misses’ and the use of rider and horse reflective/fluorescent equipment?
Rose M. Scofield, Hannah Savin, and Hayley Randle, Duchy College, Callington, Cornwall, UK
Proceedings of the International Society of Equitation Science (2013) p. 30

Pick and Flush to get Rid of Thrush