Las Vegas has been officially confirmed as the host city for the Longines FEI World Cup Jumping and Reem Acra FEI World Cup Dressage Finals in 2015.

“We are delighted that the FEI World Cup Finals in both jumping and dressage will be returning to Las Vegas in 2015, giving our sport and our title sponsors Longines and Reem Acra further global exposure on this fabulous American stage”, said FEI Secretary General Ingmar De Vos. “It will be good to be back in Las Vegas after a six-year gap and we are looking forward to really top class sport in this fabulous venue.”

Pat Christenson, President of Las Vegas Events, expressed his delight at the FEI Bureau’s decision to allocate the 2015 Finals to Las Vegas. “We are honoured to be the host of the 2015 FEI World Cup Finals,” he said. “Las Vegas last hosted the show jumping and dressage Finals in 2009, so we are extremely excited to once again showcase our destination to equestrian fans from the U.S. and around the world. We look forward to working with the FEI to create a memorable event and a venue for the top riders in the world.”

Las Vegas was the first venue to host combined FEI World Cup Finals when jumping and dressage were staged together at the Thomas & Mack Arena University of Nevada, Las Vegas in 2005. 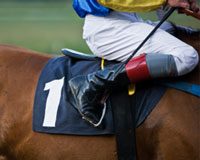 Retired Racehorses Get Some Financial Help