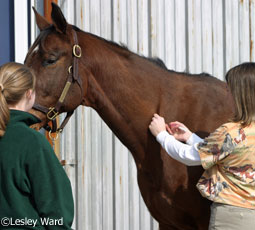 The thought of rabies conjures up mental images of aggressive raccoons or Cujo-like dogs foaming at the mouth, but horses are at risk as well. In fact, most mammals—including humans—can be infected by this disease. On Sept. 28, health organizations from around the globe work to raise awareness of preventing rabies by recognizing World Rabies Day.

Unusual behavior, particularly aggression and fearlessness, is the most well-known symptom of rabies in dogs and wildlife. The virus attacks the infected animal’s central nervous system, which can result in aggression in what is called “furious rabies”. In some cases, known as paralytic rabies or “dumb rabies,” the animal will suffer weakness and loss of coordination, leading to paralysis. Ultimately, rabies kills its unvaccinated victims.

Rabies cases are rare in horses, but there are a handful that occur each year in the U.S. Symptoms are similar to those in other animals. Because they can be close to symptoms of other diseases, rabies is difficult to diagnose. Infected horses may become depressed and uncoordinated. They may also become aggressive or excitable. Death occurs within five days after symptoms appear. If an animal is diagnosed as rabid, euthanasia is typically warranted.

In parts of the world with large populations of stray dogs roaming the streets, rabies transmission via dog bite is a serious concern. This is less of a concern in here in the U.S. where stray populations are somewhat controlled and vaccinations are required for pet dogs. Instead, the problem of rabies arises due to wildlife such as foxes, skunks and raccoons in areas where human development has encroached on those animals’ native habitat. According to the Centers for Disease Control (CDC), wild animals accounted for 92% of reported rabies cases in 2010.

Rabies is characterized as zoonotic, meaning it can be transferred directly from infected animals to humans. There are no recorded cases of a human being bit and infected by a rabid horse, but veterinarians advise extreme caution in handling potentially rabid horses as the transmission is a possibility.

Vaccination is not typically recommended for humans aside from those with an abnormally high likelihood of exposure, such as veterinarians. Infected humans can be treated through a thorough cleaning of the wound and a series of post-exposure vaccinations. However, there is no treatment for infected animals.

Fortunately, vaccination for domestic animals is effective and readily available. While most locations do not have the same regulation for rabies vaccines for horses as they do for dogs, the American Association of Equine Practitioners (AAEP) considers rabies one of the core vaccines that every horse should receive, regardless of location or lifestyle.

To find out more about World Rabies Day and the campaign to eradicate rabies around the globe, visit RabiesAlliance.org.

2009 Adequan NAJYRC Kicks Off in Kentucky