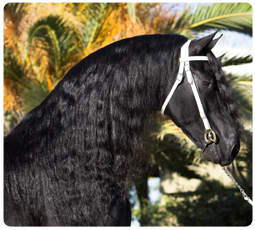 The Friesian horse, best known for its tall, powerful build, jet-black coat and abundant mane and tail, has captivated horse lovers around the world. The breed’s popularity has reached new heights in the U.S. over the past few decades with riders choosing Friesians for all types of riding. This breed’s increasing versatility is one of the highlights of the 2013 Friesian World and Grand National Championship, which runs from today through Sunday in Lexington, Va.

The International Friesian Show Horse Association (IFSHA) held its first Grand National near Los Angeles 10 years ago. The show has not settled in a permanent venue, the organizers instead opting to move to different locations throughout the country to give all Friesian exhibitors a chance to compete.

Friesians are most often associated with carriage driving and dressage, and those two disciplines will play a large part in the class schedule. This year’s show also includes the new western dressage division, which will be open to all breeds. Saddle seat, western, hunt seat and in-hand divisions showcase the ways in which Friesians are utilized in the American horse show world.

Classes are also offered for part-bred Friesians, offering a competitive outlet for the Friesian crosses that have become popular in recent years.

Watch an entry in the liberty class at the 2010 Grand National (we recommend turning your volume down.)

This year’s show will include plenty of special events outside the show ring. The United States Equestrian Federation will host a party to honor the IFSHA Grand National for being voted as the favorite breed show in 2012. The IFSHA Annual Meeting will take place on Saturday, Oct. 5 after the afternoon session. A silent auction that serves as a fundraiser for the show will run throughout the four days. And as always, the Vendor Trade Faire will give spectators and exhibitors a chance to pick up some souvenirs from their Grand National experience.

The IFHSA Grand National is a benefit show for two charities. The Fenway Foundation is dedicated to preserving the Friesian breed through developing rescue and rehoming facilities for Friesians in North America and supporting genetic and health research. The Yellow Ribbon Fund assists injured returning veterans and their families by providing housing near hospitals for visiting family members and support for caregivers.

For more information about the IFSHA Grand National, visit IFSHAWorld.com.

Watch the live webcast of the 2013 IFSHA Grand National Championship at FlandersVideoProductions.com.

Get Started in Extreme Cowboy Racing