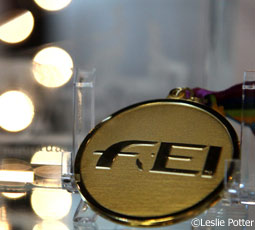 The British Equestrian Federation (BEF) has confirmed to the FEI that it is withdrawing from the bid process for the 2018 FEI World Equestrian Games and will not be putting in a formal bid.

The FEI had received four formal Expressions of Interest by the 30 September deadline, one from Britain, two from the USA–Wellington and Kentucky–and a repeat bid from Bromont/Montreal in Canada.

However, BEF Secretary General Andrew Finding has now informed the FEI that Britain will not be going any further in the bid process.

In a letter to FEI Secretary General Ingmar De Vos, Andrew Finding wrote of his “considerable regret” at the withdrawal, stating that there was insufficient time under the terms of the new bidding process for the British Federation to secure the necessary funding and identify a host venue by 15 November, the deadline for receipt of formal Bid Applications.

“While it is of course disappointing that the British Equestrian Federation has decided not to go ahead with a bid for the FEI World Equestrian Games 2018, we still have three strong candidates in the mix from Wellington, Kentucky and Bromont/Montreal and look forward to receiving their formal bid applications by 15 November,” Ingmar De Vos said.

Host city candidates will be announced on Dec. 2, 2013. Formal presentations will be made by these candidates to the FEI Bureau at its spring 2014 meeting, prior to the announcement of the host city for the FEI World Equestrian Games 2018.

Further Reading
Will the World Equestrian Games return to Kentucky?

How to Choose a Show Jumping Prospect