It wasn’t too long ago that cloning was something out of science fiction. But in the decade since Prometea, the world’s first cloned horse, was born, the practice has moved from mad-scientist territory to a viable commercial enterprise. Some well-heeled owners will commit a sizable investment to create a genetic duplicate of a favorite horse. Among the well-known cloned horses are Olympic show jumpers Gem Twist and Sapphire, champion barrel racer Scamper and three-day eventing legend Tamarillo.

Gem Twist and Scamper were both gelded before the height of their careers, and their clones have been used to pass on those celebrated genes. The clones of Sapphire, a mare who is still very much alive and having a second career as a broodmare, may appear the jumper ring in the future. But cloning is still a controversial topic, and many breed registries have prohibited cloned horses from being registered, which also prevents them from competing in breed competitions.

The American Quarter Horse Association (AQHA) is the official registry of the most populous breed of horse in the world, and one of the organizations that has barred clones. In 2013, Quarter Horse breeder Jason Abraham and veterinarian Gregg Veneklasen sued the AQHA, stating that their prohibition of cloned horses constituted a monopoly. The jury ruled in favor of Abraham and Veneklasen, the plaintiffs, but awarded no damages in the case. The plaintiffs had sought up to $5 million.

Not all of these groups share the AQHA’s ban on clones. According to a news release from the American Morgan Horse Association, the organization has no stance on cloning but supports the brief on the basis of these two statements from it:

1) The Amici Curiae do not believe the AQHA can violate the Sherman Anti-Trust Act as found by the trial court, because a single entity is incapable of conspiring with itself for the purposes of the Sherman Act. As the brief describes, the officers or committees of a single organization are not separate economic actors pursuing separate interests, so agreements among them do not suddenly bring together economic power that was previously pursuing divergent goals. Accordingly, the single entity rule excludes from the Sherman Act unilateral conduct by an organization. Further, actions taken by a single organization or entity are presumed to be independent action rather than concerted action and, thus, are not prohibited under the Sherman Act.

2) The Amici Curiae do not believe a court should mandate that any private organization must adopt certain specific rules, as the trial court did by ordering that AQHA adopt eleven specifically worded rules. Private organizations have a right to govern themselves through the adoption, administration and interpretation of their own rules. Judicial intervention by rewriting those rules improperly interferes with the internal affairs of the organization

The second point will resonate with many horse owners, regardless of their stance on cloning. While the AQHA has decided not to allow clones or their offspring to be registered, that does not prevent owners of Quarter Horses from cloning them if they wish to do so. Scamper, the cloned barrel racer, was a Quarter Horse. His clones and their offspring are not registered, but because most barrel competitions do not have a breed requirement, they are still potentially valuable equine athletes.

The AQHA does not prevent cloning of Quarter Horses from occurring, but it believes that it has the right to make rules based on the will of its membership. According to an AQHA survey, 86% of its members believe that clones should not be registered.

“APHA filed a friend-of-the-court brief in support of AQHA because we felt that the judge’s ruling put all breed associations at risk and in a position where we couldn’t make and enforce our own rules,” Smith said.

The AQHA states the following arguments in regards to registering clones.

Since its inception in 1940, American Quarter Horse breeders have been in the honorable business of working to make each generation of horses better than the generation before. There is a fundamental, shared belief among AQHA members that the art and science of breeding is the way to improve the breed. Cloning doesn’t improve the breed; it just makes Xerox copies of the same horses. With clones we’re not moving forward, we’re staying the same.”

Read more on the AQHA’s position on cloning at AQHA.com. 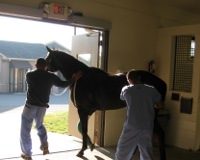