When a federal budget passed in late 2011 removed the restriction on federal inspections of horse meat, the debate over horse slaughter picked up steam. Several potential new horse-slaughter operations made moves toward beginning operation. Their operators hoped to be able to profit off what they saw as an industry that would fill two needs: disposing of an overpopulation of horses and meeting the demand from horse meat consumers in foreign countries. None of those operations ever got off the ground, however, due to concerns about environmental impacts and horse welfare. But the biggest strike against commercial horse slaughter in the U.S. was the passage of a new spending bill this week, reinstating the ban. 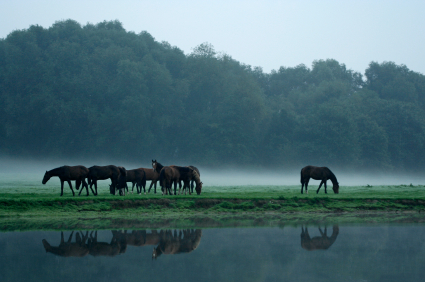 The bill passed both houses of Congress this week and is expected to receive the President’s signature by Saturday, Jan. 18.

The ban isn’t an explicit law against slaughtering horses. It’s language in the budget that prohibits the United States Department of Agriculture (USDA) from inspecting horse meat. In theory, a horse owner in the United States could still butcher a horse for their own personal use without violating any laws. However, without USDA inspections, horse meat cannot be sold for human consumption, rendering the business model of a horse slaughterhouse impracticable.

The relevant text of the bill reads:

This is the same language that was introduced in an appropriations act in late 2005, which led to the closure of the three slaughterhouses that were still operating on American soil at the time. That section had been renewed in the budget until 2011.

The issue of horse slaughter is loud and divisive in the equestrian community. However, in the halls of Congress and the country at large, the issue is barely a blip on the radar. This reinstated ban is only one small part of an enormous bill that covers everything from spending on NASA to implementing the Affordable Care Act and appropriations for military spending. The horse meat inspection ban would not have caught the attention of most members of Congress, with some exceptions.

Senator Mary Landrieu, D-La and Senator Lindsey Graham, R-S.C. spearheaded the effort to reinstate the ban in the 2014 Agriculture Appropriations bill that was ultimately included in the budget.

“I am relieved that horse slaughter is now banned in the United States, protecting the American public from the very serious health and safety risks posed by horse meat,” said Landrieu. “Slaughtering horses is inhumane, disgusting and unnecessary, and there is no place for it in the United States. I appreciate Sen. Graham’s partnership to ban this cruel practice, keep our food supply safe and save taxpayer dollars.”

The bill will prevent commercial horse slaughter in the U.S., but does not prevent horses from continuing to be shipped to slaughter in Canada or Mexico. To help close that gap in the slaughter pipeline, Landrieu and Graham introduced the Safeguard American Food Exports (SAFE) Act in March 2013. Rep. Patrick Meehan, R-PA introduced a similar bill in the House of Representatives at the same time. Horses are not raised for slaughter and are routinely given drugs and medications, including Bute, that are prohibited in meat animals because of known risks to human health. Citing that risk, the SAFE Act aims to prevent American horses from being slaughtered for human consumption.

Both bills were referred to committee. No action has been taken on them since last spring.

Further Reading
Timeline of Horse Slaughter Legislation in the U.S.