UPDATE: This year’s commercial featuring the Budweiser Clydesdales has been released on YouTube. Watch it now! 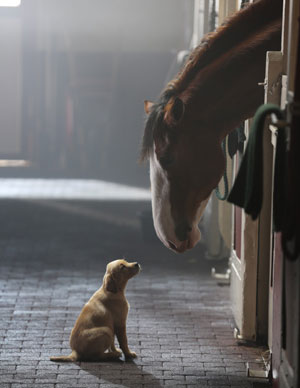 You don’t have to be a fan of football—or beer, for that matter—to enjoy Anheuser Busch’s annual Super Bowl offering. For the 2014 game, which airs on Feb. 2 on Fox, Anheuser Busch, makers of Budweiser, have confirmed that the popular Clydesdales will star in a new commercial, and they will be accompanied by one adorable puppy.

The Clydesdales will also play a supporting role in another Anheuser-Busch spot, titled “A Hero’s Welcome.” A preview of that ad has been released on YouTube.

Super Bowl ads are an unusual piece of American culture. While many TV viewers utilize DVRs or the mute button to avoid consuming commercials during most of their favorite shows, plenty of people are quick to proclaim that the ad breaks are the best part of football’s championship game. Because of the huge viewership of the Super Bowl, companies invest a lot of creative and financial resources into creating memorable ads that debut during the game. Ad spots are said to run at around $4 million, so companies want to make a big impact with their 30 or 60 second time slot.

The Clydesdales utilized in Budweiser’s ads are a part of the company’s long history. The iconic hitch first appeared in 1933 to celebrate the end of prohibition in the U.S. Since then, they’ve appeared in parades and events, and since 1986, in high-profile ads during the Super Bowl.

This year’s new Clydesdale ad for the Super Bowl was announced earlier this month in a press release from Anheuser-Busch.

According to the release, the ad will showcase the connections between the animals at the company’s breeding farm, Warm Springs Ranch. Don Jeanes, the actor who portrayed the Clydesdale trainer in last year’s much-loved “Brotherhood” ad, will reprise his role and introduce a new star in a 10-week-old puppy.

This year won’t be the first time that canine actors have joined the equine stars for a Budweiser commercial in the Super Bowl. The 1999 “Separated at Birth” spot showcased the Clydesdales’ Dalmatian companions.

Click on the images below to view some of Budweiser’s Clydesdale ads from past Super Bowls, then scroll down to vote for your favorite in our poll. Don’t see your favorite here? Tell us which one you loved in the comments section.