When most people think of vicious animals, they might picture alligators, grizzly bears or attack dogs. Horses don’t typically make the list. But the plaintiffs in a court case in Connecticut want to have the entire species classified as “vicious” and “naturally inclined to do mischief” in that state. 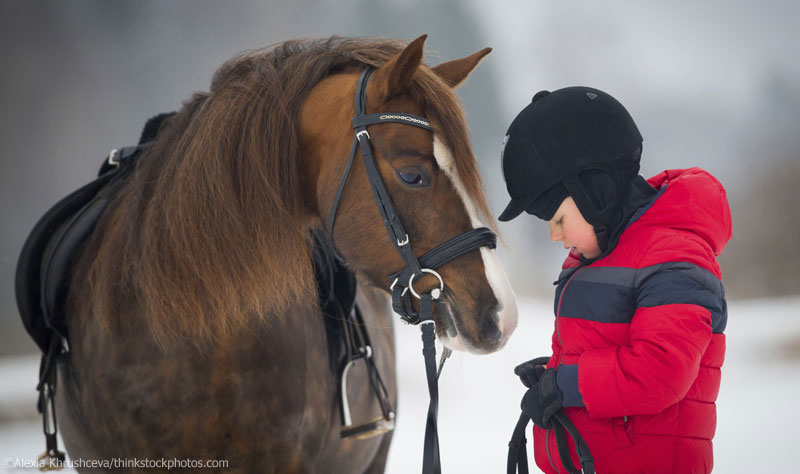 Is this child in danger? A lawsuit in Connecticut suggests that he is because of the vicious animal next to him.

The case centers on an incident at Glendale Farms, a commercial farm that has a greenhouse and boarding stable. The incident occurred nearly eight years ago, but the case has shuffled through the court system ever since.

According to court documents:

The plaintiffs filed an opposition to the motion for summary judgment in the spring of 2010, in which they argued that “a horse, by its very nature, is capable of biting someone without provocation or predisposition, and that this was known to the defendants.” The affidavit of Bradley W. Amery, a Doctor of veterinary medicine, was filed in support thereof and contained a detailed explanation as to a horse’s propensity to bite…In his deposition testimony, Astriab…acknowledged that a horse, by its very nature, could harm a person who attempts to pet or feed them.

Scuppy himself had no known history of biting or attacking people. Astriab repeatedly testified that Scuppy was a typical horse, and that statement led to the potential classification of horses as “vicious animals” in Connecticut. If Scuppy isn’t an exceptional horse and was simply behaving in a way any horse could be expected to behave, then all horses must be vicious. At least that appeared to be the stance taken by the plaintiff.

What would it mean if the state of Connecticut classifies horses as inherently vicious? The Connecticut Horse Council states:

“Please understand that if horses are determined to be “vicious animals,” they would be uninsurable and any and all uses would be affected. Training and boarding stables, therapeutic riding, horse camps, petting zoos, trail riding, and other horse-related uses and activities would be impacted.”

There is good news for the Connecticut equine community. Last week, a bill was introduced in the state’s general assembly that clarifies that horses and other equines are domesticated animals and not inherently dangerous. If passed, the bill could protect Connecticut’s horse industry from far-reaching consequences of this type of lawsuit. The text of the bill states:

The bill, HB-5044, was referred to the Joint Committee on Environment on February 7.