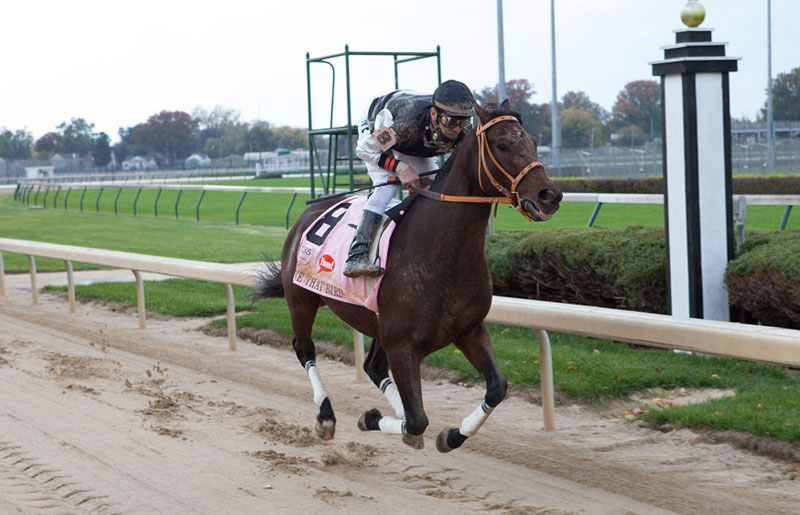 “50 to 1,” the new major motion picture about Kentucky Derby winner Mine That Bird, opens in theaters March 21 in New Mexico and will then expand across the country.

The movie follows a group of New Mexico cowboys who go on the journey of a lifetime when their small, unassuming gelding qualifies for the Kentucky Derby. They face a series of mishaps on the way to Churchill Downs, becoming the ultimate underdogs in a showdown with the world’s racing elite.

“I had been waiting for a great racehorse story for a very long time,” says Jim Wilson, the movie’s producer, director and co-writer. He is also a racehorse owner and the Oscar-winning producer of “Dances with Wolves,” noting that he read numerous horse racing scripts throughout the years but never found what he was looking for. “But when I watched what unfolded at the 2009 Kentucky Derby, I was stunned. I’ve always been a fan of true underdog stories, and after meeting the owners, trainer and finally Bird himself, I was hooked. This story had all the cinematic elements you could ask for. It’s been a real adventure and one I am proud to share with the world.”

The inspiring underdog film stars Skeet Ulrich (“Scream,” “As Good as it Gets”) among other seasoned actors, as well as real-life jockey Calvin Borel, who plays himself in the picture.

The film was shot at multiple locations in New Mexico, Kentucky and California, including Sunland Park, Churchill Downs and Santa Anita Park, racetracks where Mine That Bird actually raced.

“We even shot in the real barn and stall where Mine That Bird stayed at Churchill Downs,” says Wilson.

Mine That Bird was born May 10, 2006, and was purchased as a yearling for $9,500. He was gelded after he went into training due to temperament issues which were quickly solved. He began racing in Canada, winning four of his first six starts to become the Canadian champion 2-year-old.

His career slumped after he was purchased by Mark Allen for $400,000 in the fall of 2008, going winless until he rallied from last of 19 horses to first to win the 2009 Kentucky Derby at 50-to-1 odds. After trouble out of the starting gate, he lagged a full 8 lengths behind the field, getting a face full of mud kicked back at him from the sloppy track. Borel found he had plenty of horse left in the home stretch, however, opting for a daring rail trip to win the race by 6 ¾ lengths.

Mine That Bird continued his run for the Triple Crown that year, finishing second in the Preakness Stakes and third in the Belmont Stakes. He earned $2,228,637 throughout his career but never won another race in nine starts after his win at the Kentucky Derby. Mine That Bird was retired from racing in November 2010 and currently lives with his owners at Allen’s Double Eagle Ranch in Roswell, New Mexico. He loves having his picture taken and rolling a giant ball around his paddock.