The final day of the Road to the Horse competition is where the trainers get to display the results of their hard work over the three days of preparation. After selecting an unhandled colt on Friday, then introducing their horse to saddle, bridle and rider over the course of the weekend, the final session on Sunday is a test of how strong a foundation they’ve created in their horse. 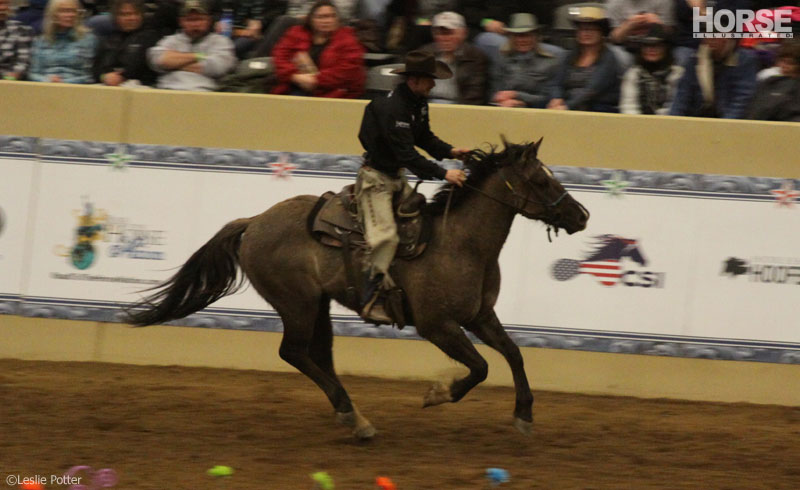 Jim Anderson allowed his colt, Smoky, plenty of time to move around the arena before getting down to business.

In the final session, each trainer has 40 minutes to tack up their horse in the round pen, complete several required elements including three gaits in both directions, then work through an obstacle course. With any remaining time they may perform a freestyle to demonstrate their horse’s trust and training.

Trainers are permitted to take as much unjudged warm-up time as necessary within the 40 minutes, and they must declare to the judges when they are ready to be judged for each element. That declaration requirement has created one of the idiosyncrasies of the Road to the Horse experience. Competitors often forget to declare before beginning an element; this is universally met with a chorus of “Declare! Declare!” from the audience.

Canada’s Jonathan Field was the first competitor to ride in the final round on Sunday. As he tacked up his horse, an independent-minded chestnut, he told the audience that he had decided to name the colt Mojo, “because he’s got a lot of it.”

Field explained how Mojo’s personality would affect the way he would ride the obstacle course. He pointed out that the colt was sensitive to having his sides touched, which could cause challenges in some of the tight obstacles. Field’s prediction proved true when they reached the drag obstacle. The obstacle required the riders to drag a weighted bag several feet. When the rope attached to the bag put pressure on Mojo’s hindquarters, he took off bucking, depositing Field in the dirt before taking a brief tour of the arena. Fortunately, Field was unhurt and Mojo calmed down quickly. Field had a sense of humor about the situation.

“I hope the judges don’t mind that dismount,” he said.

To this, the announcer quipped, “You didn’t declare it.”

After finishing the obstacle course, Field used the few minutes he had remaining to perform a freestyle maneuver in classic Road to the Horse fashion. He stood up on his colt’s back, and Mojo stood still for him, allowing the duo to finish on a high note. 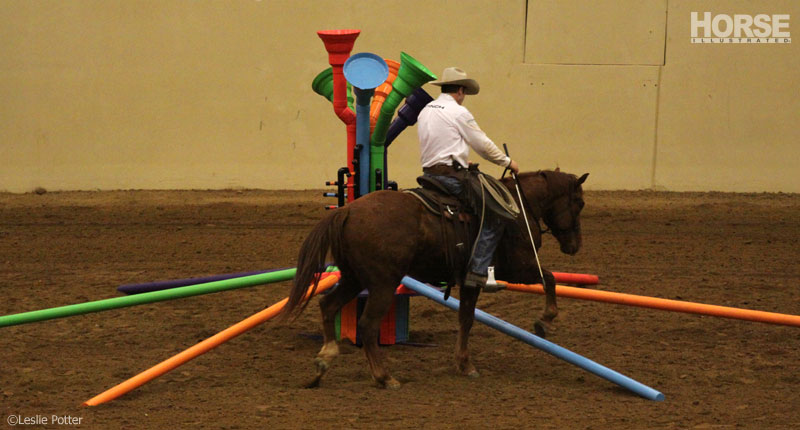 Jonathan Field and Mojo started their obstacle course off strongly. Mojo didn’t have much trouble navigating the elevated poles in the third obstacle. 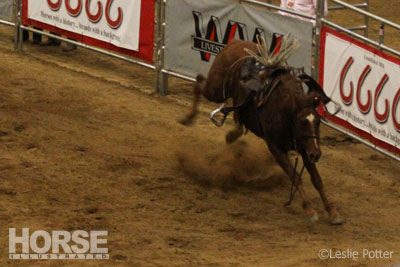 After being startled by the rope on his hindquarters during the dragging obstacle, Mojo took off bucking, leaving Field on the ground before taking half a lap around the arena. 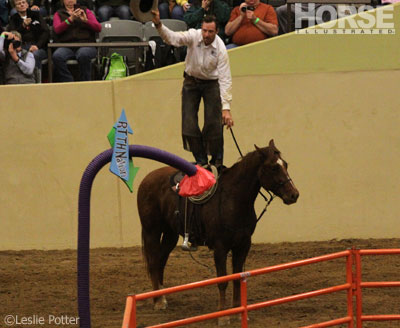 In his freestyle, Field showed that in spite of the earlier bucking spree, he had earned his colt’s trust during their training sessions over the weekend.

Dan Steers of Australia was next. As he moved through several training maneuvers in the round pen, including leading his colt, Ringer, over a tarp and cracking a whip several times, he explained that he liked to start each training with a review of things they’d worked through in past sessions. Ringer looked like an old pro, not flinching at the sound of the whip and eagerly pawing at the tarp on the ground. Steers announced that the colt had already been purchased by an intern of his training operation, Double Dan Horsemanship.

“I would have bought him myself, but it’s about $40,000 to bring a horse to Australia,” he explained. “I don’t think I’ve sold quite enough DVDs for that.”
Ringer’s calm and willing attitude carried through the entirety of the obstacle course, and the pair finished with nine minutes to spare. Steers used that time to highlight his colt’s trusting nature, standing up on the saddle and cracking two whips overhead. 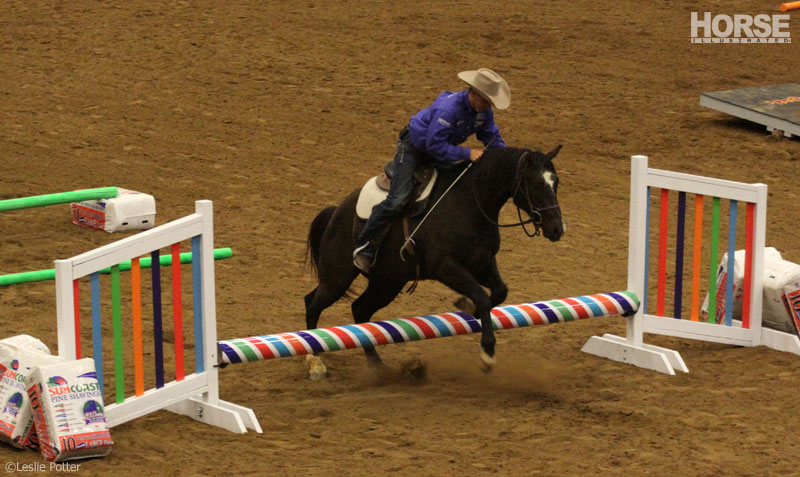 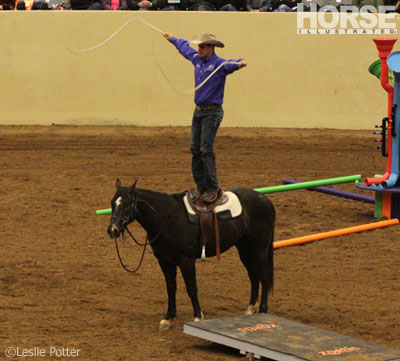 The winner of last year’s wild card competition, Jim Anderson, was the second Canadian in the order of go. His horse, Smoky, is a distinctive grulla with racing bloodlines. Once mounted, Anderson allowed the colt to take several laps around the arena at a fast canter. He explained that Smoky was inclined to move forward, and he wanted to give him the chance to do that before getting down to business.

Anderson worked his horse at all three gaits and practiced stopping in both directions. Although the clock was ticking, he continued for approximately 15 minutes before declaring that he was ready to be judged. His strategy served him well. Smoky performed each gait flawlessly. That solid foundation held up through the obstacle course where the pair completed each element with minimal difficulty. Even with the long warm up, Anderson finished the required elements with 10 minutes left on the clock to devote to his freestyle.

In place of a flashy trick, Anderson used his remaining time to give the audience an abbreviated clinic, explaining what he does when starting a young horse. He discussed working with the horse in three sections: the head and neck; the shoulder; and the hindquarters. Smoky willingly yielded to Anderson’s cues almost like a finished horse. 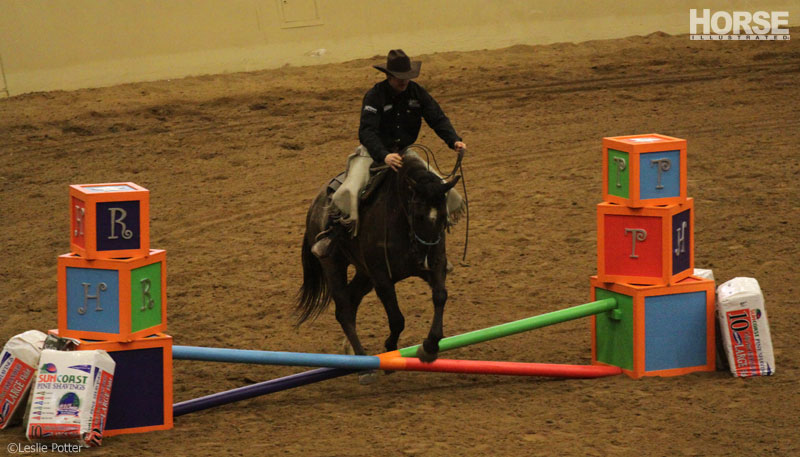 Smoky gamely jumped the crossrail, the first in a line of three small jumps. 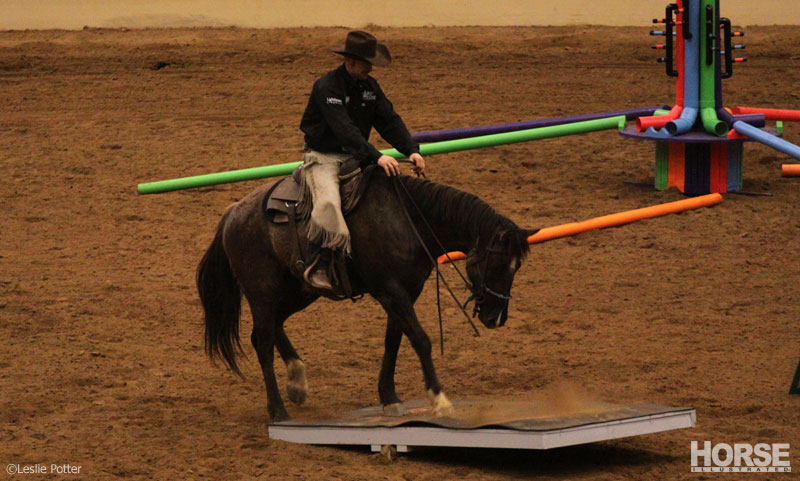 The teeter-totter can be an intimidating obstacle for a green horse, but Anderson was able to convince Smoky to cross it several times in both directions.

The final rider of the competition was Swiss trainer Antoine Cloux. Cloux’s colt, a bay he called simply Number Five (“I’ll give him a name because I like him, but right now that’s not important,” he explained) did not acquiesce to his trainer easily.

“Every time I’ve gotten in the pen with this guy, he’s not been with me right away,” said Cloux. He later explained that the colt’s active mind wasn’t a liability at all, and in fact would be an asset in his future career. “He’s cutting-bred. He’s not spooky, but he looks at things, and I don’t want to take that away from him.”

In earlier sessions, Cloux had found that he had to work to get his colt moving forward, but Number Five had plenty of energy on Sunday afternoon, readily moving forward and even jigging at the walk. Nevertheless, the pair completed all of the obstacles successfully, and had time left over to show off the colt’s natural skill in the freestyle. With only three days of training, Cloux and Number Five worked a steer in the arena, showcasing those cutting genes that hold a lot of promise for the horse’s future. 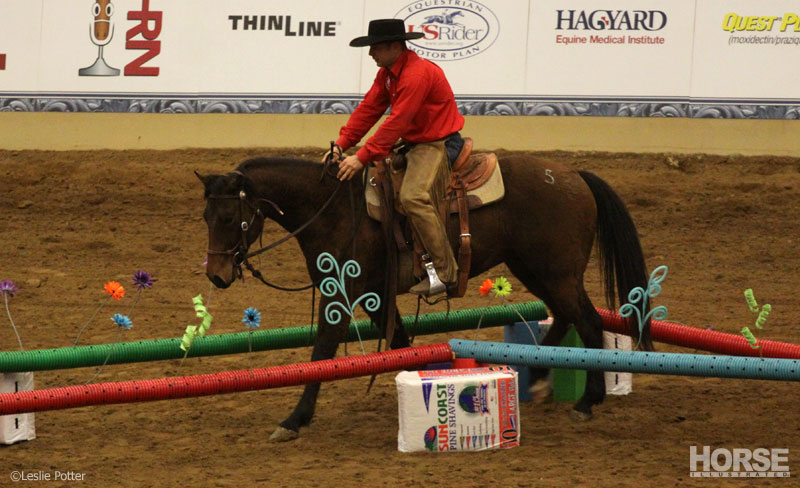 Number Five was distracted by all of the activity in the Alltech Arena, but Antoine Cloux was able to focus the colt’s attention to successfully complete every obstacle on the course. 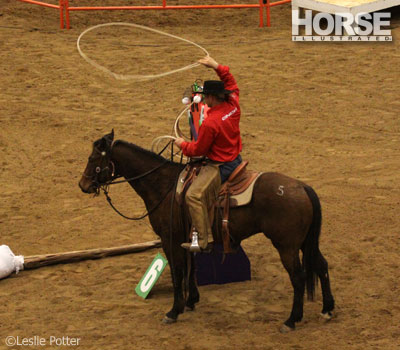 “They told me they’d give me a roping lesson!” joked Cloux as he made his first-ever attempt at swinging a lasso. 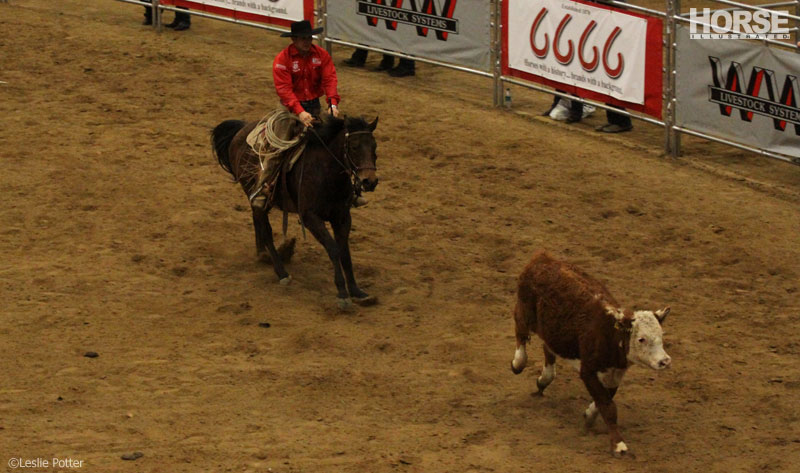 Number Five is bred for cutting, and Cloux took advantage of the colt’s natural instincts, working a steer during his freestyle.

Legendary horseman Jack Brainard was an honorary judge at this year’s event, selecting one trainer to win the Jack Brainard Horsemanship Award. Brainard explained that each horse in the competition was different, and some would challenge their trainer more than others. Taking that into account, he selected Jonathan Field as the winner for displaying the best horsemanship during this year’s Road to the Horse.

For the overall Road to the Horse Champion title, the judges selected wild card competitor Jim Anderson. Competing against big-name clinicians is no easy task, but Anderson took an early lead and held it through the end. His patient, methodical approach to his sometimes challenging colt paid off for the Alberta-based trainer. 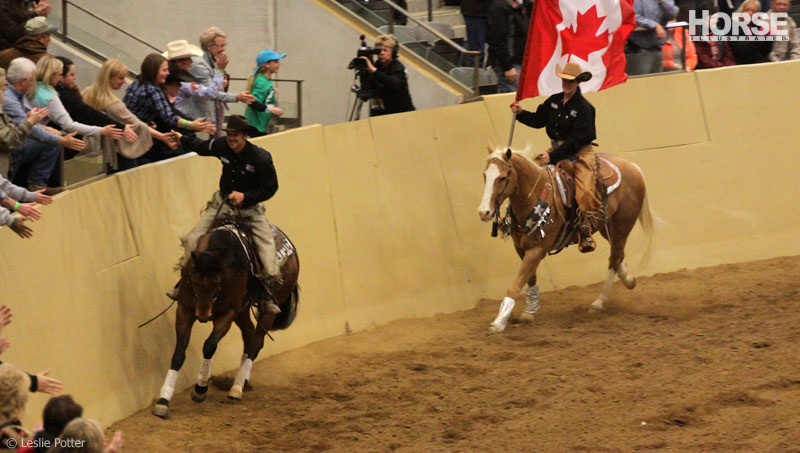 Jim Anderson and Smoky take a well-deserved victory lap after Anderson was named Road to the Horse champion.

Next year’s Road to the Horse could be the most competitive yet. Event producer Tootie Bland announced on Sunday that the 2015 competition would have a $100,000 purse for the winner, the largest prize in Road to the Horse history.

For more information on Road to the Horse, visit roadtothehorse.com.