Injury, a change in the weather, a new boarding barn—at some point in a horse’s life he will experience a move from pasture to stabling. Experts at The University of Nottingham’s School of Veterinary Medicine and Science have published research which shows this change in living conditions could play a key role in the onset of colic. 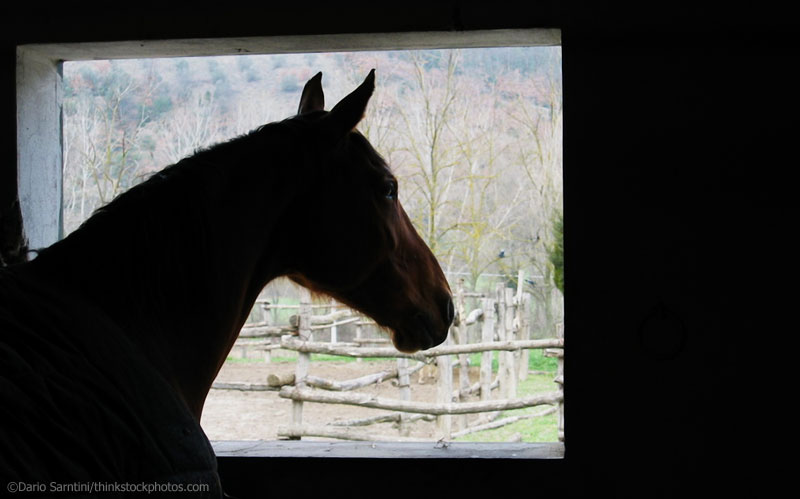 Colic is the most common emergency problem in the horse, and one of the main causes of death in the horse.

Simple colonic obstruction and distension (SCOD) or impaction is essentially dried accumulation of feed within the intestine that causes blockages. It is the second most common cause of equine colic. The study, published in the academic journal Equine Veterinary Journal, showed that after being moved from pasture to stabling horses drank nearly twice their normal amount but their droppings were significantly less and much drier.

The research was led by Dr. Sarah Freeman, an Associate Professor in Veterinary Surgery.

“Change in management is known to be an important risk factor for colic in the horse,” says Dr. Freeman. “Impactions often occur in horses which have a management change from pasture to stabling or enforced [stall] rest due to weather conditions, injuries etc. We think that the results of this study are a significant step towards understanding why horses develop impaction colic when stabled. The changes in function were rapid and marked and were most significant during the first five days after change in management. We think this represents the high risk period for colic.”

Identifying why impactions occur is important in developing measures to reduce the risk of this type of colic. However, it is not yet clear from existing research whether the underlying mechanism of impaction is dehydration of food, or an alteration in contractions of the gastrointestinal tract, or both.

The aim of Dr. Freeman’s study was to investigate the effects of a management change from pasture with no controlled exercise to stabling with light exercise on large intestinal motility and features of gastrointestinal water homeostasis in the horse.

The subjects of this research were seven military horses housed at the Defence Animal Centre in Melton Mowbray, Leicestershire in the U.K. They were monitored 24 hours a day while at pasture and for 14 days following the transition to a stabling regime with light controlled exercise.

“The study followed them as they moved from pasture to stabling and showed that although they drank more when they were stabled, this did not compensate for the change in diet and environment,” said Dr. Freeman. “There was both slowing down of gut motility and drying out of gut contents. The greatest effect was in the first five days, which highlights a particular risk period for colic. The significance is that although we know that abrupt changes in management cause colic, exactly how this affects the gut was not known. This is the first study to look at these changes in normal horses and we hope that the results will help vets and horse owners modify management to reduce these problems.”

Dr. Freeman is leading a number of studies into equine colic. She is also finalizing the outcomes of the nationwide colic survey.