Home Horse Care Mosquito Woes: How to Protect Your Horse 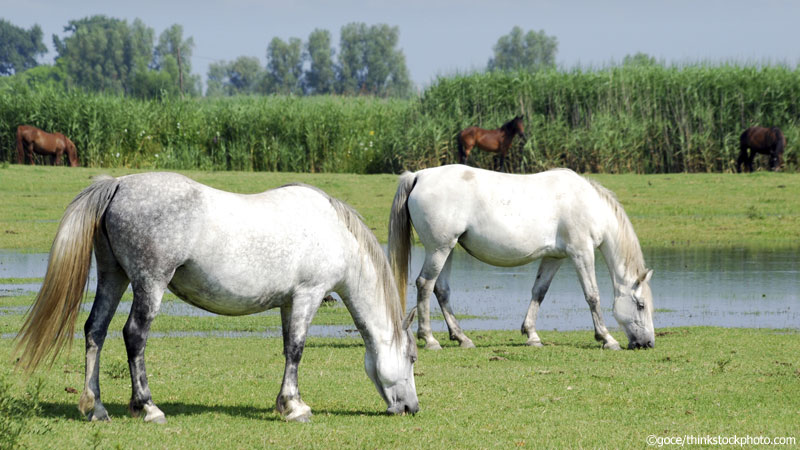 Standing water near your horse’s home can become breeding grounds for mosquitoes.
Amazing how a tiny insect can cause serious problems for a 1000-pound horse, but mosquitoes can do just that.

Some horse owners mistakenly believe West Nile is only a threat in certain parts of the country.

”West Nile was first seen in 2000 in the northeastern United States. By the end of 2001, cases were seen in all lower 48 states, and in 2002, the West Nile outbreak had 15,257 confirmed cases,” notes Earl Gaughan, DVM, DACVS, technical service veterinarian for Merck Animal Health.

Although West Nile equine cases have been confirmed in almost every state, the number of cases has declined in recent years, but have paralleled an increase in human cases. Gaughan notes that 627 equine cases were confirmed in 2012 and reported from 41 states. 2013 data has not yet been released.

“Occasionally, a mosquito-bite hypersensitivity will occur in horses exposed to mosquito populations. Local swelling from bites with reddening of the skin similar to what is seen in people, generalized swelling and itching can be observed,” says Gaughan. “This can be treated with antihistamines, corticosteroids and non-steroidal anti-inflammatory drugs.”

Fortunately, effective vaccines exist for all of the major mosquito-borne equine diseases. Talk with your veterinarian about the best time to vaccinate and recommended frequency to offer the greatest protection in your area.

“Vaccination remains the best means to truly protect an individual horse,” says Gaughan, who points out that just spraying the horse with repellent is often insufficient for insect control during peak mosquito season.

In addition to routine vaccination, horse owners can reduce the mosquito population and reduce mosquito exposure with specific management practices, including the following:

In some parts of the country, local municipalities conduct insecticide spray campaigns to fight mosquitoes.

“Coordination with local insect control authorities should be a first step,” advises Gaughan. “Depending on the size of a horse owner’s property/facility, spraying insecticides can be frustrating due to the needed volumes and frequency of needed spraying. An owner of a small facility should coordinate with neighbors for coordinated spraying, whereas a large facility may have more success as a sole source for mosquito control.

“Drainage and management of standing water—ground water, waste water, even open containers in barns and paddocks—is probably the best place to put your efforts and energy, versus insecticide use,” he adds.

This is because water is a necessity for mosquito reproduction. Every species of mosquito goes through four different life stages and the first three occur in water. Get rid of the water and you’ll naturally decrease the mosquito population.

Obviously, you must have a constant water source for your horse, but if you empty and refill tanks every three days during mosquito season, this disrupts the mosquito life cycle. If emptying water tanks isn’t possible, use “mosquito dunks” to kill larvae in standing water. Just realize that these products don’t kill adult mosquitoes, so they’re only a part of the puzzle in the fight against these pests.

Despite what you may read on the Internet, Gaughan notes that there are a few things that don’t get rid of mosquitoes. These include ultrasonic devices, garlic, bats, Vitamin B, bug zappers and incense.

More on mosquito control at the barn:
10 Tips for Reducing the Risk of West Nile Virus at Your Farm
Biting Flies and Other Horse-Farm Pests
HorseChannel’s Fly Control Resources