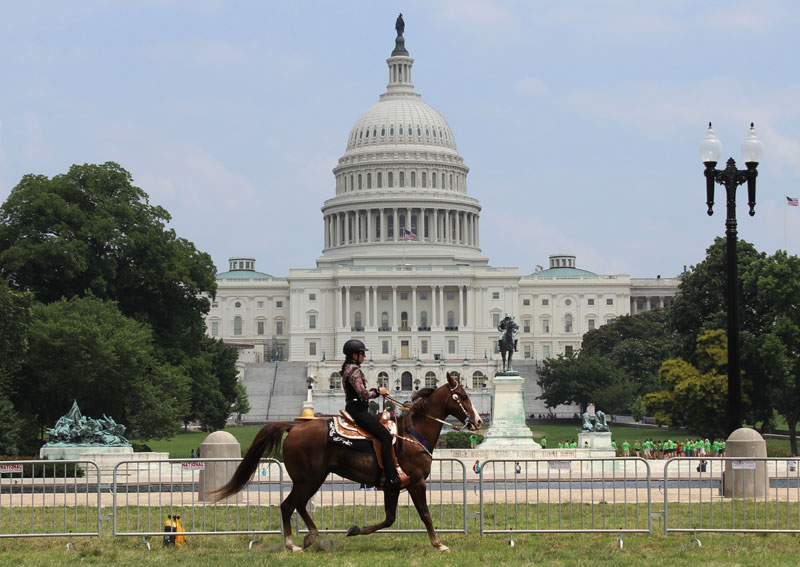 Four-legged and two-legged supporters of the PAST Act cross in front of the U.S. Capitol. Photo Courtesy AVMA
Supporters of legislation that would stiffen penalties for soring sent a message to federal lawmakers last week: Giddyup.

Introduced in April 2013, the Prevent All Soring Tactics (PAST) Act has been sitting in a House subcommittee for the past year and will die if the current Congress fails to advance and approve the bill by January 2015. Soring is the deliberate infliction of pain to produce a high-stepping, exaggerated gait in certain gaited performance horses.

Representatives of the American Veterinary Medical Association joined horse owners and other backers June 18 for the Walk on Washington. Tennessee Walking Horses, Spotted Saddle Horses and Racking Horses paraded through Union Square in view of the U.S. Capitol in support of the proposed law, which counts 292 House members and 56 senators as co-sponsors.

The American Association of Equine Practitioners and dozens of other veterinary, horse industry and animal protection groups have called on Congress to pass the bill.

The PAST Act would amend the Horse Protection Act by:

The PAST Act was introduced by Rep. Ed Whitfield, a Kentucky Republican, who attended the Walk on Washington.

“I don’t think there’s any question it’s a good bill; it’s a reasonable bill,” Whitfield said. “We’re frustrated right now because when you have that kind of support and that many organizations supporting you, normally you could get the bill to the floor. We will continue our efforts to make sure we can pass this legislation.”

AVMA has been lobbying Congress on behalf of the PAST Act. The group’s executive vice president and past president, Ron DeHaven, DVM, testified in November 2013 before the House Subcommittee on Commerce, Manufacturing and Trade, where HR1518 is lodged.

“It is my hope that the members of the subcommittee will swiftly mark up and favorably report the PAST Act, which will provide the statutory changes necessary to protect the health and welfare of our nation’s walking horses,” he said at the time.

U.S. Rep. Steve Cohen, a Tennessee Democrat, was among the co-sponsors who spoke at the Walk on Washington.

“I am confident that if the leaders of the House allow us to vote on our PAST Act that it will pass overwhelmingly,” Cohen said. “I hope today’s Walk on Washington helps convince House leadership that the time is now to act to prevent this horrendous form of animal abuse. The infliction of pain on an animal or another human is wrong. … We ought to treat all God’s creatures well.”

Victoria Broehm, the communications manager with AVMA’s Governmental Relations Division, reported on the Walk on Washington in her AVMA@Work blog.

Liked this article? Here are more resources on soring and gaited-horse welfare.
Soring, Show Horses and the Future of the Tennessee Walking Horse
New Bill Aims to End Soring

What Your Horse’s Whorl Says About Him