From a single cell to Dolly the sheep, the science of cloning has expanded almost exponentially over the past two decades and even our horses aren’t exempt. The first horse was successfully cloned in Italy in 2003—a Haflinger filly named Prometea. So what does this mean for the horse world?

In general terms, a clone is an exact genetic copy of another individual. In Prometea’s case, her genetic makeup came from another horse’s skin cell. The DNA from this skin cell was then grafted into an egg and implanted into a mare that carried the embryo until birth. A few months prior to Prometea’s birth, the world’s first cloned mule was born in the US—a male named Idaho Gem.

Cloning is different from gene mapping, which is a tool that allows researchers to know the location of all genes on each chromosome within a certain species. The horse’s genetic code was fully sequenced in 2007 by a collaborative effort stationed at the University of Kentucky called the Horse Genome Project.

Gene mapping does not involve making copies of DNA. Instead, it creates a map of an individual’s genes, which are made up of DNA. Gene mapping is helpful when trying to identify the location of genetic mutations that cause certain genetic diseases or even help understand the complex heredity of different coat patterns, like the leopard spotting seen in some Appaloosas.

Although gene mapping in horses is beneficial for the species since it increases the understanding of complex genetics, cloning is much more controversial. Some breed and showing associations have regulations against allowing cloned animals to compete or even be registered. For example, the Jockey Club does not allow cloned horses to race or be registered while the Federal Equestre Internationale (FEI), the international governing body for equestrian sports, does allow clones to compete.

The American Quarter Horse Association (AQHA) is currently in a legal battle over the issue of cloning. Having ruled previously not to allow registration of cloned animals, in 2012 an individual filed an antitrust lawsuit against the association, requesting the court to force the AQHA to allow for the registration of clones and their offspring. In 2013, a jury voted in favor of the individual. As of early 2014, the AQHA plans to appeal.

Advocates of cloning horses argue that the technology allows preservation of rare breeds and rare genetics. Additionally, many successful equine athletes are geldings without the ability to reproduce. In these cases, cloning would allow for those particular individuals, if not gelded a second time, to pass on their genetics.

Those against cloning horses argue that the equine gene pool along certain lines is small enough already and producing the same animal repetitively through cloning could make genetic selection even narrower. This may perpetuate some genetic diseases, such as HYPP (hyperkalemic periodic paralysis), a muscle disease seen in some Quarter Horses that can be traced back to a single sire named Impressive.

One thing to keep in mind is that there are multiple factors that create a great equine athlete, not just genetics alone. Environment, diet, and training all have enormous influences in outcomes of success and even though a cloned horse is genetically identical to an elite equine athlete, this does not guarantee greatness.

This interesting debate of bioethics will likely continue within the horse industry for some time as breed associations and competitive equestrian organizations weigh in. Horse owners, too, are asking themselves: a horse is a horse, of course, of course, so what’s the big deal about clones? 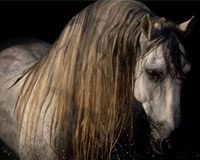 Robert Vavra Exhibit Opens at The International Museum of the Horse...