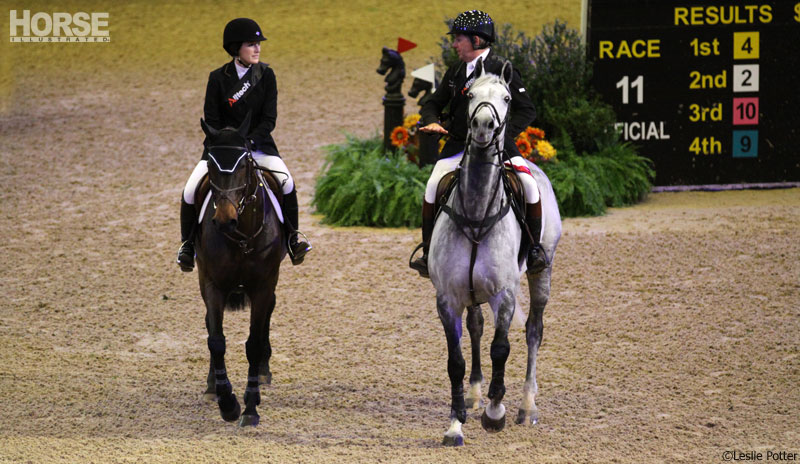 Equestrian is one of the few sports where men and women compete as equals at all levels. But do horses have a preference for male or female riders? (Pictured: Jessica Springsteen and Nick Skelton at the 2011 Alltech National Horse Show Grand Prix. Photo: Leslie Potter)
Here in the U.S., the majority of equestrians are women and girls. While the top levels of Olympic competition and some western sports have a more equal mix, the population of recreational riders and amateur competitors skews strongly female. But the roots of modern riding are military for most English sports and ranching for western, both historically masculine worlds.

So is riding a more masculine or feminine pursuit? Why not ask the horses?

Researchers at the University of Veterinary Medicine in Vienna wanted to find out if horses perceived a difference between male and female riders, and if they would show a preference for one of the other. The study was published in the journal Comparative Exercise Physiology earlier this year.

For the purpose of the study, the researchers measured cortisol, a hormone released in response to stress, and heart rate variability to quantify the test horses’ stress levels.

The riders used in the experiment were men and women of similar experience levels. The researchers measured the same stress indicators in the riders as they rode at the walk, trot and canter and over a course of fences.

Additionally, the researchers used a special pad under the saddles to view pressure on the horses’ backs to determine if physical differences in weight distribution would have an impact on the horses’ reactions.

The researchers found that cortisol levels did increase in the horses during the ridden test, but the increase was the same regardless of the sex of the rider. Cortisol levels in riders increased as well, but again, there was no difference between the men and the women. Heart rate and heart rate variability also appeared unaffected by the rider’s sex.

Saddle pressure increased with male riders, but this was attributed to the fact that the male riders simply weighed more than the female riders. The distribution of pressure remained the same between men and women, suggesting that there was no inherent difference between the posture and seat of similarly experienced riders.

The researchers conclude that, assuming a similar riding ability between riders, there is no fundamental difference in a horse’s stress responses elicited by male and female riders.

There are, of course, exceptions. There are certainly individual horses that indicate a preference, but this is frequently the result of that horse’s life experience. In general, it appears that riding truly is a level playing field for men and women.

Liked this article? Read on for more on men, women and horses
The Near Side: Girls and Horses
Women Riders are Unbeatable in Show Jumping’s Battle of the Sexes
The Gender War