Vaulting concluded today at the 2014 Alltech FEI World Equestrian Games with the finals for the pas de deux, the men’s and women’s individual, and the squad competition.

Pas de Deux
Mary Garrett and Kristian Roberts of the U.S., both competitive as individuals, performed a balanced and acrobatic routine on Diva 506. A late dismount may have pushed down their score for the test, but they finished with a respectable 8.043 and an overall score of 7.886, which was enough for seventh place.

American Sisters Cassidy and Kimberly Palmer were next to vault. They performed a routine to music from the movie Frozen and completed one of their best routines ever on the international stage. An 8.151 put their championship score at 8.150, fifth overall at the end of competition. 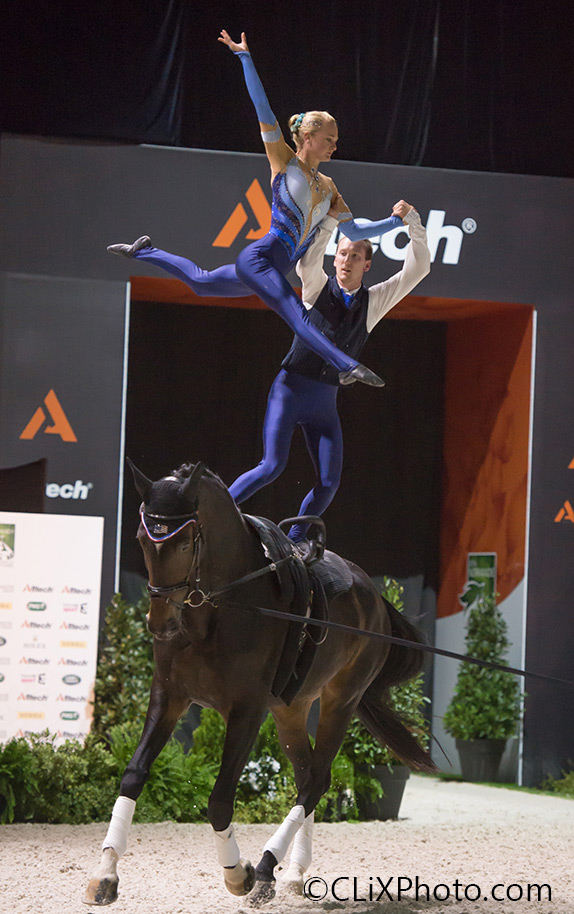 Mary Garrett and Kristian Roberts of the U.S. Photo: CLiXPhoto.com

It was no surprise to see Jasmin Lindner and Lukas Wacha of Austria in the gold-medal position at the end of the final round of pas de deux competition. Their routine is inspired by Siegfried and Roy, the former Las Vegas headliners known for their work with white tigers. Their performance went through with barely a wobble from either vaulter. Their score of 9.035 put their championship score at 9.059, an unbeatable first place finish.

Pia Englerberty and Torben Jacobs won the silver medal for Germany with Danny Boy 25. Sisters Joanne and Hanna Eccles held on to the bronze for Great Britain.

Women’s Test
Elizabeth Iaonnou was the first American to vault in today’s final. She performed an upbeat routine to Olly Murs’ “Dance with Me Tonight,” which earned a 7.677 from the judges, putting her in 10th place overall at the end of competition.

Mary McCormick was next for the Americans, vaulting on Palatine. Standing in third place overnight, she was the best chance for an American medal. She opened with her own unique move and kept the pace up throughout her routine. She had a wobbly landing, but didn’t put a hand on the ground, which would have been a deduction. She scored an 8.506 to bring her overall score to the lead spot. But with the world’s best yet to vault, it wouldn’t last.

Simone Jaiser of Switzerland performed on Luk, longed by her mother. Jaiser is a strong, athletic gymnast, and she was on her game during this final. Her nearly perfect routine scored an 8.857 and pushed her overall score up to 8.433 and into bronze-medal position at the end of the competition.

Overnight leader Joanne Eccles of Scotland performed her test to “I Dreamed a Dream” from Les Miserables exactly as she has throughout this competition: flawlessly and with an exceptional display of athleticism. After completing her perfect dismount, there was little doubt that she would be able to defend her 2010 individual gold. And sure enough, her score of 9.119, the only score above 9, brought her overall score to 8.718 and a secure first-place position.

Anna Cavallaro of Italy with her equine partner Harley was the final woman to vault in the final. Other than a slightly late dismount, she performed a mistake-free for an 8.822, securing her silver-medal finish. Along with Danish vaulter Rikke Laumann, these scores pushed McCormick out of the medal standings and into fifth place overall.

Men’s Test
Gabe Aniello pulled out all the stops for his final test. He performed a difficult test with no mistakes and a bold delivery on Ferdinand 194. The scores in vaulting are based on not just the vaulter’s performance, but the longeur and horse performance as well. Ferdinand appeared a bit tired in this final round, and unfortunately ended up with a lower horse score than usual. However, Aniello’s score of 8.062 moved him into the lead position—temporarily.

American Kristian Roberts was next to go with Diva 506. His understated performance was well-executed, and earned him a 7.615, moving his composite score up into first place. But with the top vaulters yet to go, that position was precarious for Roberts.

German Erik Oese performed a final freestyle with his trademark confidence. He demonstrated challenging jumps and exceptional balance finishing with an 8.835, putting his total score at 8.483, which was good enough to maintain his bronze-medal position.

France’s Nicolas Andreani entered the arena to the roar of the home crowd. He performed a theatrical freestyle dressed as Albert Einstein, complete with three-piece suit and unruly gray hair. With exceptional balance and control, he turned in a flawless performance for an 8.723, moving his total score to 8.498 with a narrow lead over Erik Oese.

Andreani was followed by teammate Jacques Ferrari on Poivre Vert. His gravity-defying test showed why he is the reigning European champion. The judges loved it and the French crowd was ecstatic. The test brought the only score above 9 in the men’s division—a 9.166. That moved Ferrari up ahead of Andreani and into gold-medal position. With that, France took its first gold of the games on home soil. 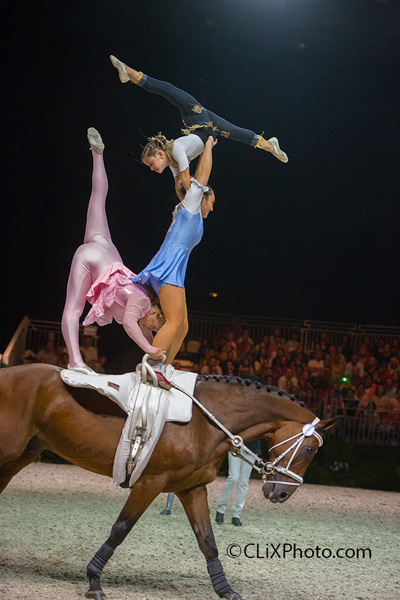 Squad Freestyle
The Woodside Vaulters from the U.S. were the trailblazers for the squad competition. Their test is a Wizard of Oz themed routine set to music from the film. Longeur Julie Divita kept Stanford moving at a steady canter for the duration of the test. The squad routines feature six different vaulters working alone, in pairs and up to three at a time, constantly switching off throughout the routine. For that reason, the tests are considerably longer than those for singles, and the horse’s ability to stay consistent is exceptionally important.

The powerhouse squads were saved for the end of today’s competition. The home team from France took the ring with their horse Watriano R fourth from the end. With an artistic and technically challenging test, they earned a 8.825 to put them at the top of the leaderboard.

The team from Germany was up next, and there was no doubt they would shake up the top standings. Vaulting on Delia 99, the German squad executed their test to an arrangement of music by the British rock band Muse. They left nothing on the table, loading up their performance with challenging exercises that they completed flawlessly. Their 9.058 would prove to be unbeatable. Their championship score of 8.724 was gold medal material.

The Austrians followed, hoping to repeat the success they’d had earlier in the day with their pas de deux. But it wasn’t to be. A fall led to a score of 7.841 brought and their championship score down to 7.874. They were followed by the formidable Swiss team. The Swiss squad’s test aboard Will Be Good was solid, but an 8.648 wasn’t enough to propel them to the top of the podium. They finished with the silver medal in between Germany’s gold and France’s bronze.

Video of the Week: Orphan Foal and Teddy Bear