The marathon phase of combined driving at the 2014 Alltech FEI World Equestrian Games in Normandy took place on Saturday at La Prairie Racecourse in Caen.

The sport of combined driving was modeled after three-day eventing, and the marathon phase is the cross-country equivalent. Horses are tested on their endurance and agility in a course of cross-country obstacles, called hazards. 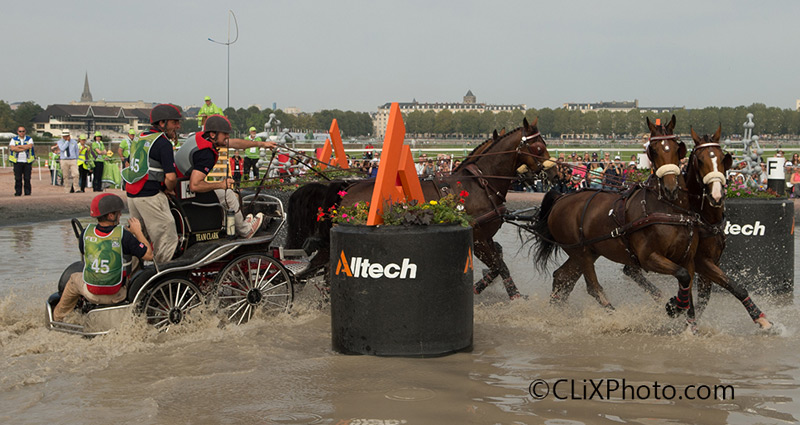 Each hazard is built with stationary obstacles with gates that the drivers must navigate in a pre-determined order. This involves a certain amount of strategy on the part of the driver, who typically has the option of choosing the exact route through a hazard based on what they think will be the most efficient way to go for their team of horses. In four-in-hand driving, the drivers carry two grooms/navigators in the carriage to help balance the vehicle around tight turns, to be available in case there is a problem with the horses or equipment, and to help navigate the hazards.

The design of this WEG course is a bit different than the usual combined driving course. The hazards were set up alongside the racecourse at La Prairie. The drivers travel between each of the eight hazards on the actual racecourse rather than across open country. The drivers are timed on each hazard individually rather than a course as a whole. They accrue penalties at each hazard to determine their score for the phase. For WEG, the medals are determined solely by the overall penalty score after all three phases. However, in combined driving events, drivers are recognized for winning not only each individual phase, but a winner is determined separately for each marathon hazard.

Misdee Wrigley Miller was the trailblazer for the American team in the marathon. Her team of bay Dutch-bred horses appeared to have plenty of energy on course. She had a few difficulties on course, but no major errors. She finished with 130 penalties to move her to 39th place in the marathon and 38th overall.

Allison Stroud was up next for the Americans. She opted to drive her sporty team of chestnuts conservatively, sacrificing the pursuit of speed for smooth accuracy. This technique allowed her to finish with 107.58 and 25th place in the marathon, 23rd for the whole competition.

As the top-ranked competitor after the dressage phase, American Chester Weber was the final driver on the marathon start list. His lead was narrow enough that Australia’s Boyd Exell and the Netherlands’ Theo Timmerman and Ijsbrand Chardon were in striking distance. He lost precious seconds with a sticky point in the first obstacle. Although Weber made no major mistakes, he simply didn’t have the speed to maintain the top spot. However, even though he finished 12th in the marathon, he managed to stay in second place behind Exell. Timmerman moved into third place.

The American team has dropped into fourth place standing after the second phase. The Netherlands has kept its lead with Germany in second and Hungary in third.

Driving concludes on Sunday, the final day of WEG, with the obstacles (cones) phase.