Home Riding and Training Western Riding Ask the Expert: Respect at the Lope 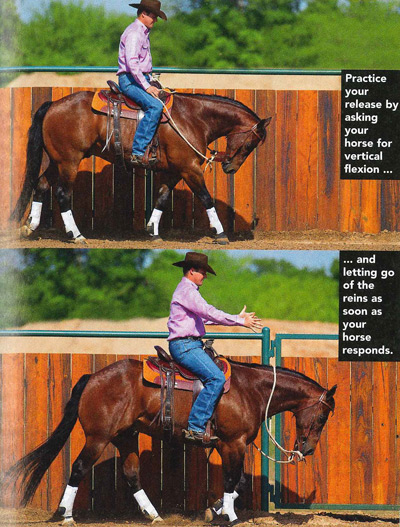 Q: My 4-year-old horse is usually very laid-back about everything. However, when we start loping, he starts bucking. I have checked my tack and nothing seems to pinch him, so maybe he is just young and excited. How can I fix this habit?
— Celine Rickels, Iowa

A: First, good job on eliminating your tack as the source of your horse’s problem. Now, let’s define what bucking truly is. What a lot of people call bucking is when the horse’s front feet stay on the ground and he kicks up his back legs. That’s not bucking. Bucking to me is what you see at the rodeo: All four feet are off the ground, the horse’s head is down low, and his mouth is open.

Kicking up, or “crow hopping,” is a simple demonstration of a horse’s lack of respect. What type of horse usually kicks up? A lazy one that doesn’t want to go forward. When you ask a horse like this to go from a jog to a lope and he kicks up with his back legs, it’s his way of telling you to get lost.

On the other hand, most horses that are really bucking are not showing a lack of respect. They are most likely reacting to fear: the fear of a rider being on their back, the girth, the back cinch, the rider’s legs, the spurs, or something that jumped out of the bushes. Something caused them to use the reactive side of their brain. That’s how most horses learn to buck. Sometimes, once a horse has dumped a rider three or four times and has gotten used to bucking, he starts bucking out of habit, not so much out of fear.

Whether your horse is kicking up to demonstrate his lack of respect or is truly bucking out of fear or habit, there are several ways to fix the problem. If he’s kicking up because he doesn’t want to go forward (which sounds accurate), get his feet moving better on the ground. Preferably, put him in a round pen (or on the longeline) and then point up in the air with your hand to signal him to move forward, then cluck and spank with a whip until he lopes around the round pen. First spank the ground, and if necessary, spank your horse. Get him so focused on you that as soon as you ask him to move by pointing with your hand, he immediately responds. If you get rid of his laziness and lack of respect on the ground first, he’ll be a lot more willing to go forward when you get on him. In fact, if you diligently do your groundwork, more than likely, kicking up under saddle will no longer even be an issue.

When you do get on your horse and ask him to lope, first squeeze with both legs to ask him to go forward. Wait for a count of two, and if he doesn’t go, cluck. Wait for another count of two, and if he doesn’t go forward, spank him from side to side with the end of your reins or a whip. If you spank with rhythm and he kicks up with both back legs, spank him again. You may have to spank him several times before he realizes that every time his hind legs leave the ground you will make him feel uncomfortable, but when he leaves his feet on the ground, you will leave him alone.

If your horse is truly bucking, the last thing you want to do is spank him because he’ll only buck harder. If he is bucking, immediately do a one-rein stop: bend his head and neck around to one side and try to get him to disengage his hindquarters. This takes away his ability to buck because his hind legs are moving laterally. As soon as he’s stopped, get off him and go right to work moving his feet on the ground. Don’t get off and put him away. If you do, you’ll teach him that bucking is what earned him a rest. Hustle his feet so he understands that bucking was a big mistake.

You do have to be a confident rider to go through this process. If you’re not, make sure you do your groundwork thoroughly and correctly so that your horse will go forward under saddle as soon as you squeeze and cluck. Or, have a more experienced rider get on for a few days to get your horse’s feet moving at the lope.

Clinician Clinton Anderson owns and operates Downunder Horsemanship in Stephenville, Texas, where his method of horsemanship has helped to transform the relationships between thousands of horses and riders. He also hosts two training programs that air weekly on Fox Sports Net and RFD-TV. www.downunderhorsemanship.com 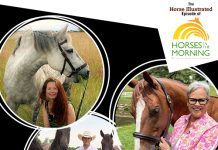