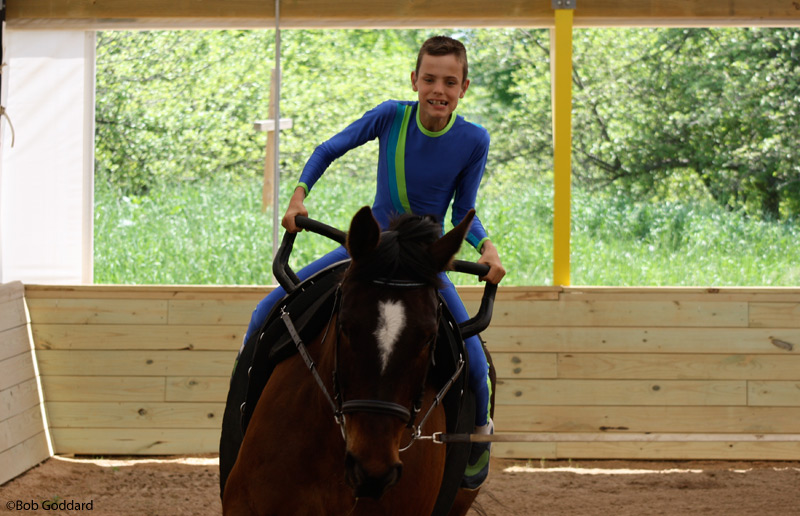 Special-needs clients at Karin Schmidt’s Therapeutic Horse Connection in Michigan benefit from safe, fun vaulting-style activities which develop balance, coordination, and strength, not to mention one-to-one bonding with the horse and boosted self-esteem.

Most people are familiar with riding for the handicapped programs, but did you know vaulting plays a role in therapeutic programs as well? Often described as dance and gymnastics on horseback, equestrian vaulting is a fun sport in which fitness, teamwork, and creativity flourish. Like any sport, this dynamic combination of riding and acrobatics takes place at a wide variety of levels. Adaptive vaulting is just as its name describes: vaulting adapted to accommodate any sort of special needs.

Just as in competitive vaulting, vaulters in therapeutic programs learn the sport’s compulsory exercises, as well as perform their own freestyle, first on a vaulting barrel (a stationary apparatus), and then on a horse at the halt, walk, and even trot. “In adaptive vaulting, we look to the moves to achieve certain goals like balance, strength, coordination, and confidence,” says Pete Senn, Chair of the American Vaulting Association’s Adaptive Vaulting Committee. “It also has to be fun!” These vaulters master such skills ranging from sitting to standing and rolling on a moving horse.

Similar to therapeutic riding programs, children and adults of all ages with physical, mental, or emotional disabilities benefit on every level, from motor skills and cognitive development to communication and a sense of responsibly. Not only are vaulters challenged to reach new physical levels, they also experience the joy of being a part of a team and partner with the horse.

One of the great aspects of adaptive vaulting is its integration into the vaulting community as a whole. Many competitive vaulting teams include a therapeutic branch of services, creating a team consisting of both able-bodied and differently-abled teammates.

In addition, mainstream vaulting competitions offer adaptive vaulting divisions on both barrel and horse. Special needs vaulters can take part individually in modified compulsory and freestyle classes, as well as together with a non-impaired teammate in a ‘special pairs’ freestyle on the barrel. Vaulting gives special needs individuals both a team to be a part of and a competitive sport to call their own.

Experienced and knowledgeable coaches, spotters, and volunteers ensure the safety of vaulters, creating a fun and nurturing environment. “We had so many participants [at The Root Farm in New York] – up to fifty in a week at one point- that we would not have been able to survive without volunteers,” notes Senn (now with Therapeutic Horse Connection in Michigan), who goes on to explain programs need experienced horse people to tack, untack and longe; side-walkers to accompany vaulters with physical challenges; and assistants for a variety of tasks, including helping participants mount and dismount, which for some may be a challenge.

Many clubs also offer inner-city outreach and combat veteran programs. For example, The Root Farm’s ‘Vaulting for Veterans’ initiative provided veterans and their families an opportunity to take part in a family event at the farm. 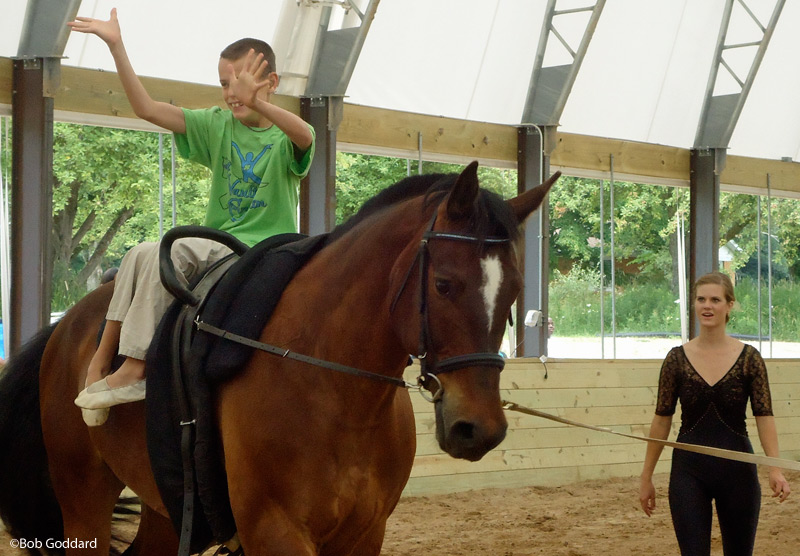 New Jersey’s Vaulting Visions team works with youth from Philadelphia in transition homes such as foster care and group homes, inviting the kids several times in the summer and at Christmas to the club’s farm, where each person is partnered with a vaulter. Starting with meeting the horses in the barn to learning moves on the barrel, the participants work their way up to trying some vaulting on the horses, culminating with sitting at the canter.

“The biggest change I see is that they often come not making eye contact, not smiling, acting like they’re too cool for this,” says team coach Alison Gieschen. “By the time they leave, there is so much joy on their faces. They thought they wouldn’t fit in and be able to mix with this world, but by the time they leave, they are like, ‘Wow, this is really cool!’ They have such a sense of accomplishment. It opens a window somewhere inside of them to possibilities they never knew existed.”

“When Colton gets on the barrel or horse, he immediately relaxes and transforms into a happy little boy,” says Sandra Snyder of her son who has been diagnosed with Asperger’s syndrome. “When he was three, his therapists would wrap him tight into blankets and toss him up and down; this would relax him, and they were able to get him to speak. The same is true with the horse. When Colton vaults, it is truly one of the only times we see joy and happiness with him.” 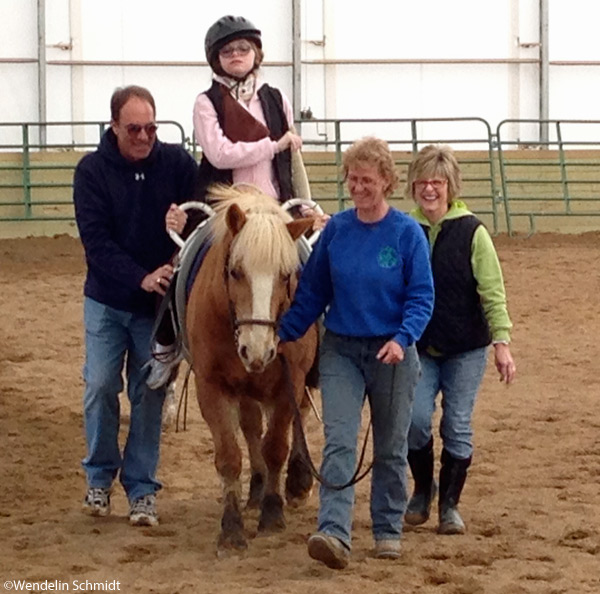 Colton was introduced to the adaptive aspect of vaulting through his older sister, Raelyn, a competitive vaulter with Bear Gap Vaulters in Pennsylvania. “Raelyn loves to work with Colton in pairs, because it gives her the opportunity to teach, and it is honestly one of the only times Colton is relaxed enough to take instruction easily! He loves to transform into a character from his favorite movies and decides that he can do anything when he is up there.”

Find a Program Near You

Whether a stand-alone adaptive vaulting program or part of other equine-assisted therapies, groups across the country provide beneficial services.

Liked this article? Here are others you’ll love:
Criteria for Therapy Horses
What is Equine Assisted Psychotherapy?
From Vaulter to Coach to Para-Dressage Athlete

Natalie DeFee Mendik is an award-winning journalist specializing in equine media. Visit her online at www.MendikMedia.com.

Switching from Western to English