Home Equestrian Lifestyle Life on the Set of the Black Stallion

Tim Farley was wrapping up his photography degree at Brooks Institute in Santa Barbara, Calif., when his father Walter’s 1941 novel, The Black Stallion, began its transformation to the big screen. Francis Ford Coppola’s Academy Award-winning feature film was released 35 years ago this fall, and it remains a cinematic classic.

It’s the story of a young boy named Alec Ramsay, who is shipwrecked on a desert island with a wild Arabian stallion that he befriends and names The Black. After being rescued and later discovered by a veteran racehorse trainer, they enter a match race between two champions of the track. Inspiring millions when it debuted in 1979, the film’s exquisite portrayal of the horse-human bond is more appreciated than ever today. 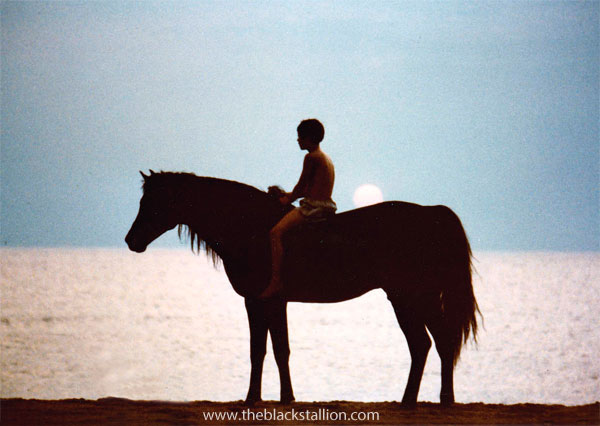 When the movie first headed into production in 1977, Tim skipped his graduation ceremonies to work on it.

Were you there from the start?

I had the honor of working on the movie from the very first days. I met director Carroll Ballard when he and my dad were looking for an Arabian stallion to play The Black. I was still in college. I went to talk to Carroll and to Fred Roos, the producer, to see if I could get a job. Of course, they said I could have a job. They didn’t say they would pay me at first. I was a 21-year-old kid who knew nothing about making movies.

What did you do?

My screen credit was production assistant, but with only about 30 of us on crew, I did a little bit of everything. My first job was working in the office. The film was in preproduction at that point, and one of my assignments was to make copies of all the script changes for the crew. However, I also ran off an extra set of copies to send to my dad! They weren’t real happy with that. Everyone was wondering, “Where is he getting all this information?” I was his mole!

But actually my dad is the one who came up with the fun sequence in the jockey’s room before The Black races. It became a humorous scene in the movie, because they kept adding weight to this little kid. The way the script was originally written had Alec sneaking weight into his pockets, or putting on a weight belt or something. My dad said, “Nobody would ever do that because the officials add all the handicap weight jockeys must carry before a race. They would never sneak weight.” He came up with some helpful ideas.

They probably wouldn’t make a film like that these days. It was shot almost like a documentary, with a small crew on the Mediterranean island of Sardinia. That’s why the footage is so different. Those scenes with the magic of the boy and the horse getting to be friends on the island really did happen. I was one of the lucky people there watching a young Kelly Reno portray Alec Ramsay, together with Cass Ole as The Black.

It was exciting. Even though we had to take cold showers! Working on those beach sequences, there were no hotels out there. We stayed in an empty school with cold-water showers. Every once in a while you’d see a tourist come through for an hour or two, but we were pretty far out. Almost all the locations were like that.

How were those galloping-on-the-beach
scenes filmed?

We had do to a lot of tracking shots, like sequences of The Black running down the sand bar, especially when Alec’s learning to ride and keeps falling off. But, we couldn’t say, “Oh we need some dolly track here for 500 yards and we have to go 30 mph.” So, how are you going to do that? Well, they came up with a Citroën 2CV; it’s like a French version of a Volkswagen Beetle. With one wrench you can take apart the whole thing. We took the doors off and took the seats out. We used that as our [camera] dolly to race down the beach because the horse was going pretty fast. We had to kind of wing it.

Probably the “tag” sequence, when Alec first rides The Black. The scenes where he gives the horse a little bit of the seaweed, then they start following each other back and forth, and pretty soon, he gets on the back of the horse to ride—and keeps falling off. Those scenes on the beach were magical. Also, at the end of the movie where you see that big double rainbow and the horse rolls on the ground and Kelly [Reno] rolls on the ground. It was totally impromptu. It’s during the credit roll at the very end of the film.

The budget on The Black Stallion wouldn’t even pay for most TV commercials these days. I think that the actual budget, including advertising, was under $15 million.

You took lots of photos on set. How was shooting Cass Ole?

He and Kelly had a good relationship because they spent so much time together before the movie started, but Cass Ole was kind of like the character of The Black. He was very independent, knew he was gorgeous, and that everybody loved him. He’d take control if you’d let him. On the other hand, Cass was gentle with Kelly. He didn’t run off, and he could have several times. That’s saying something about Corky Randall too. Corky trained Cass for months to be able to work him at liberty and have him listen to voice commands to come back. When Corky would call and crack his whip, Cass would come to him no matter where he was.

What else was memorable?

The most memorable days for me were on the island. It took us months to get some of those shots. It was almost like in the movie—when Alec arrives back in America, that first sequence when he’s in a real bathroom with running water contrasted with being on the island for months. That’s kind of what happened to us too.

It was fascinating driving to the set daily with Mickey Rooney in Toronto, the location for our 1940s New York scenes. Mickey had been in a long career slump, but The Black Stallion brought him an Oscar nomination and he returned to the stage. 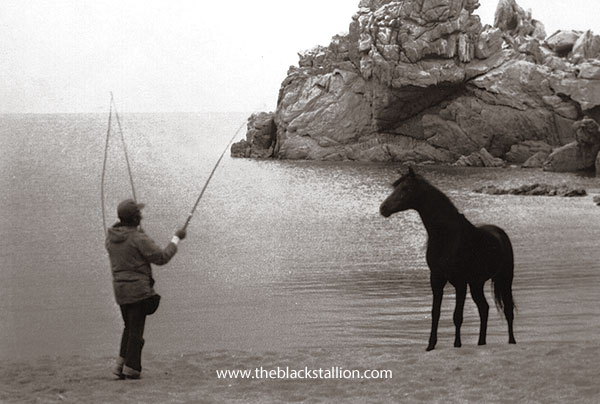 Corky Randall trained Cass Ole to come with the crack of a whip.

Here’s to the 35th anniversary. What’s ahead?

We’re still working on getting that next feature, The Black Stallion Revolts, into production. I’d also love to see them re-issue an enhanced version of the film. There’s a lot of footage no one’s ever seen. If you put that together with the extra footage from The Black Stallion Returns, all the outtakes and deleted scenes and so forth, they could make a three-day Movie of the Week for TV or come up with a great boxed set on Blu-Ray.

On March 18th, the HD version of The Black Stallion feature film came out on Blu-Ray. That’s big news for the fans. It’s an MGM/UA film, but a www.foxconnect.com release. You can find it on www.theblackstallion.com.

President and creator of TheBlackStallion.com, the official Black Stallion fan site, TIM FARLEY is based in Florida, where he furthers the spirit of The Black Stallion legacy along with his work as co-founder of the HorseTales.org literacy program.