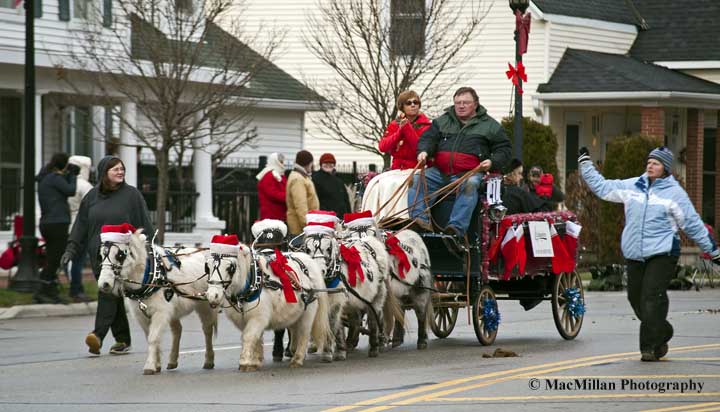 The six-Mini Horse hitch was a parade favorite. The adorable team is owned and driven by Judd Porter, St. Louisville, Ohio, with Lebanon Mayor Amy Brewer on the seat next to him and other Lebanon residents riding along in the back of the wagon.
Nestled in the rolling hills of southwestern Ohio is the historic city of Lebanon with a population of just over 20,000. It is a lovely, quaint Midwestern city, but every year on the first Saturday in December the town population grows to over 175,000 people when the Christmas Carriage Parade & Festival comes to town.

The parade, which began in 1989, ushers in a wealth of sights and sounds rich in holiday spirit and tons of equestrian fun. There are two parades held during the festival, one in the afternoon and another in the early evening when the lanterns on the carriages and holiday lights along the streets create a sparkling spectacle. 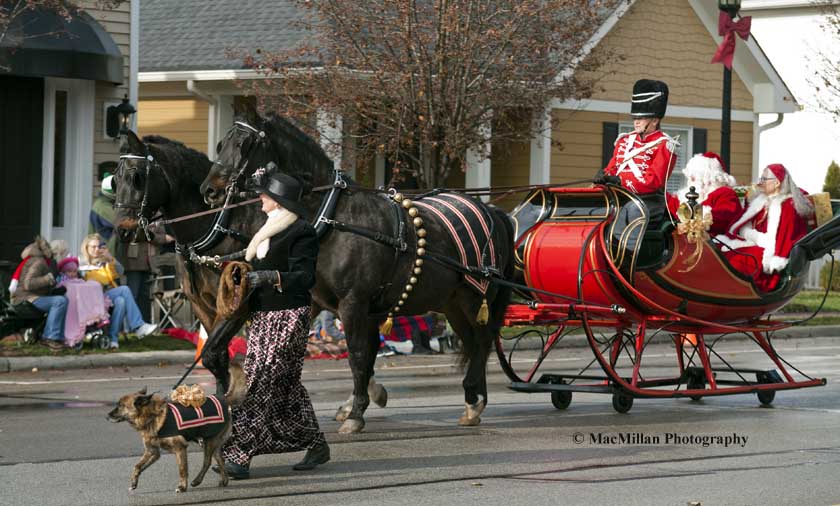 Driver Linda Freeman (dressed as the toy soldier) of Lebanon, Ohio, had the honor of delivering Santa and Mrs. Claus to town. She drove her two Argentinean-born Hackney Horse geldings Brownie (age 17 on the driver’s left) and Bill (age 15 on the right) to a circa 1880’s antique Hudson Valley six-passenger sleigh which was mounted on wheels for the parade. The sleigh is owned by Michael and Carol Burke, Loveland, Ohio, (who are riding in the sleigh as Santa and Mrs. Claus respectively). Walking with the sleigh is Tracy Raikes of Lebanon and Freeman’s dog Darwin.

“The Lebanon Carriage Parade and Christmas Festival is the largest all horse-drawn carriage parade in the United States and is the largest holiday kickoff in Ohio,” says Sara Arseneau of the Lebanon Chamber of Commerce. “This event is larger than any of us…it is humbling to play a role in bringing the spirit of Christmas to so many. Words just cannot describe the feeling of magic that our horsemen and these two parades bring to Lebanon.” 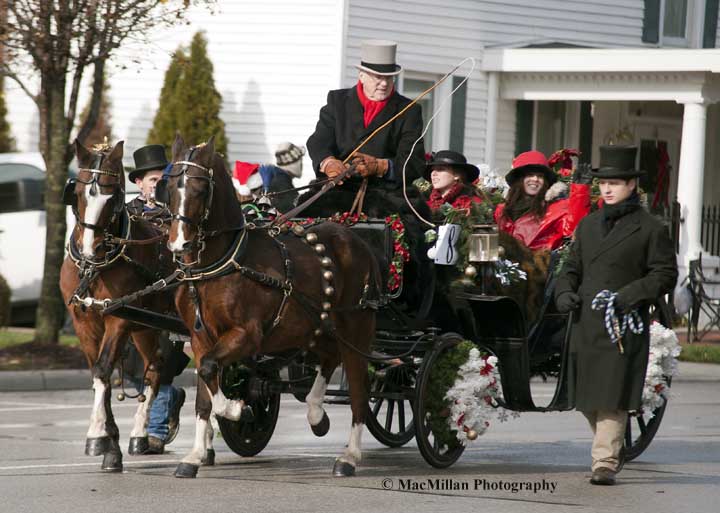 Charlie Poppe, Meadowbrook Farm, Cincinnati, Ohio, has participated in every Lebanon Christmas Carriage Parade since its inception in 1989. In 2014 he drove his Hackney Pony geldings Facebook (left, with the wide blaze) and Oh Canada to an antique Victoria carriage built by the Mulbacher Company in Paris, France. The carriage was made for the first 1876 Centennial where it earned a gold certificate for the best vehicle in the formal vehicles class. After the exhibition, Sarah Roosevelt, FDR’s mother, purchased the carriage for their Hyde Park Estate on the Hudson River. FDR used it for one of his inaugurations.

“The very first year of the parade, it was by invitation only,” says Charlie Poppe, a longtime participant in the parade. “They invited 30 of us to come. The day of the parade it was about six degrees above zero. I brought my team of four grey Welsh Cobs. It was so miserably cold we kept their horse blankets on them for the whole parade; thank God I brought red horse blankets. I had my friend Joe stay in the truck with their bridles so that the bits would stay warm in between parades. At night for the evening parade it had dropped down to four below, but there was still a good crowd. I thought that they would never do the parade again, but the next year it was 68 degrees, so you never know with the weather. It has mushroomed into a fabulous event. The nice thing is that the parade has stayed all horse-drawn. At night it becomes a magical wonderland with the lights. It is really beautiful.”

Watch the six-Mini-Horse-hitch in action in the video clip below:


On a normal day you can find many interesting shops and places to eat in Lebanon, but on Christmas Festival parade day there are even more shopping and dining opportunities in the food and crafts alley. The Lebanon Christmas Festival offers a plethora of activities including: free horse-drawn wagon rides; tours of the historic Golden Lamb Inn and the 18th century Glendower Mansion; photos with Santa and Mrs. Claus; rides on the North Pole Express vintage train; a gingerbread house display; a Christmas play at the local theatre; “Winter Wonderland” at a local tree farm; a living nativity presented by a local church; breakfast with Santa; a holiday light display, and live entertainment on the downtown stage.


The finale to the Christmas Carriage Parade is traditionally the 1892 Airens fire pumper owned by Jack Selvey and pulled by a four-abreast team consisting of Percherons and pinto drafts. This year four generations of one family were represented on the pumper, driver Gary Hopkins from Lynchburg, Ohio, with his daughter Greta Branham, grandson Josh Branham and great granddaughter Emma Branham.

A peek down Broadway Street, the main drag of Lebanon, shows in the foreground parade entry number 41, a six-horse Mini hitch owned and driven by Judd Porter, of St. Louisville, Ohio, with Lebanon Mayor Amy Brewer riding shotgun. Around 185,000 people lined the streets of Lebanon to view the 2014 afternoon and evening parades. 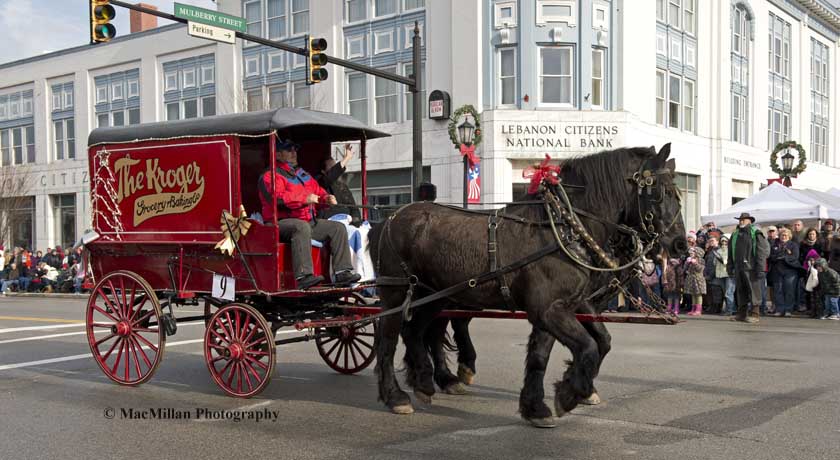 The Kroger grocery store chain owns an original Barney delivery wagon which was driven in the parade by Stan Voorhees and his two Percherons. The wagon was used by the original Kroger family store based in Cincinnati, Ohio, in the late 1880’s 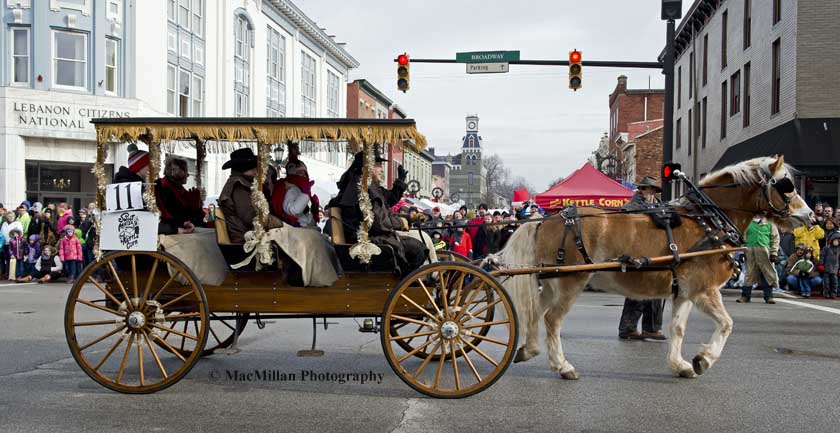 The Anspach family from Waynesville, Ohio, had two entries in the parade, the first one being this 1900’s era surrey driven by Gene Anspach and pulled by his Haflinger gelding Pike. Their other entry was a ranch wagon pulled by a Haflinger mare named Missy. The Anspach family, including 14 grandchildren, has been a part of the parade for five years. 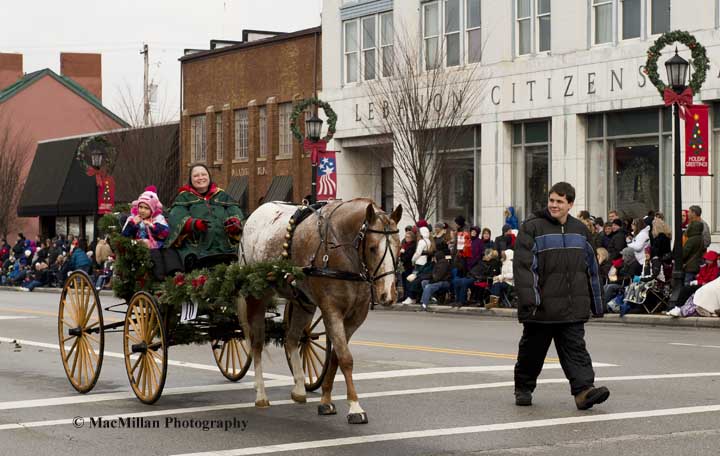 A circa 1895 carriage pulled by Henry, an Appaloosa gelding, and driven by Teri Sterner, CR Ranch, Xenia, Ohio. Henry has made appearances in five Christmas parades. The Grinch, Cindy Lou Who and Max, the Grinch’s faithful dog, no wait… faithful Mini, made an appearance in the 2014 Lebanon Christmas Carriage Parade. The Grinch is played by driver Alice Ault with her husband Keith Ault leading and Aimee Bowdle as Cindy Lou Who. The Aults are from Walnut Acres, Chilicothe, Ohio. 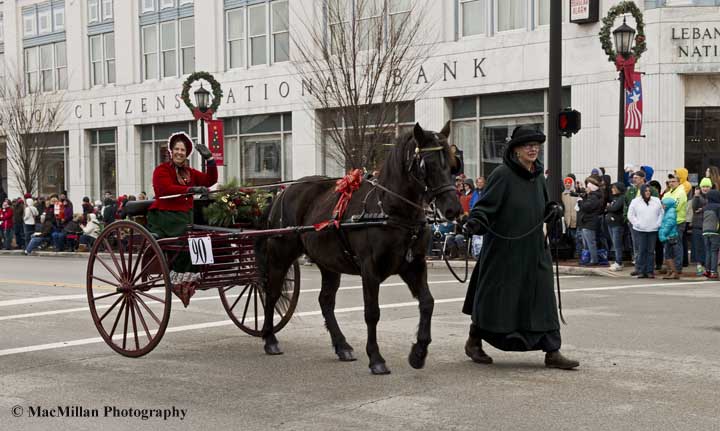 Carl Juergens, CN Ranch, Hartford, Ohio, drove his team of draft mares, Sally and Jillian, put to a beautiful white vis-à-vis carriage (French for face to face, in this case meaning the seats in the carriage face one another). Sally, a 20-year-old Percheron, is the dam of Jillian, age 10, who is by the Friesian stallion Thor. 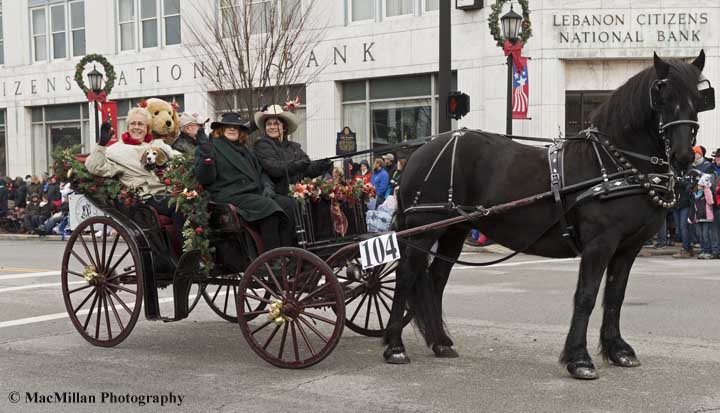 Jocelyn, a.k.a. Josey, is a 12-year-old Friesian Percheron cross who also a daughter of the mare Sally from the previous featured team. She pulled a 1947 two-seat surrey owned by Don and Karen Heaberlin of Lebanon and driven by Nancy Juergens, of Hartford, Ohio. This carriage was sponsored by the Humane Association of Warren County and riding in the carriage are two of the founders of the association, Karen Heaberlin and Mari Lee Schwarzwalder holding Nancy’s rescued Beagle Daisy Darlin’. 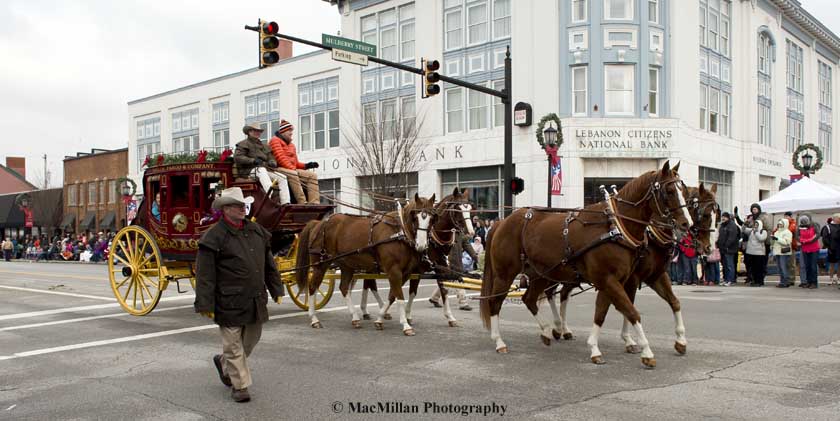 The Wells Fargo stagecoach driven by Ty Kukhan, Mason City, Iowa, and owned by Wells Fargo Bank. The coach is pulled by four matching chestnut Quarter Horses. Riding in the stagecoach are Brandi Aliaga with her daughters Maddie and Sophia and Robert and Robyn Buskirk and their children Elle and Ryan. 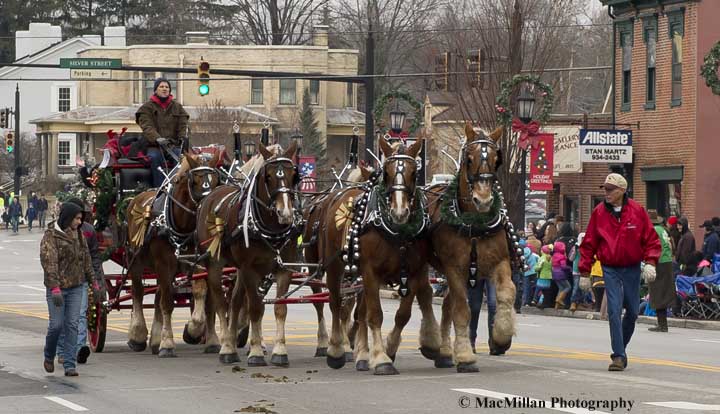 Pounding down the pavement of Broadway are the Cornerstone Belgians six-horse hitch from Greenville, Ohio, pulling a vintage box wagon driven by Kirt Stryker. Making their seventeenth appearance in the Lebanon Christmas Carriage Parade was the six-horse Clydesdale team from Old Tyme Travel driven by Debbie Bechstein. The hitch was sponsored by Trihealth.

Liked this article? Here are others you’ll enjoy:
Video: Christmas Carriage Parade
Guidelines for Using Horses in Parades
How to Bling out Your Horse Safely 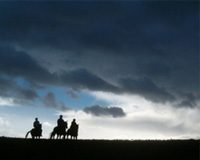 Ride for the Rescues will benefit Mustang adoption