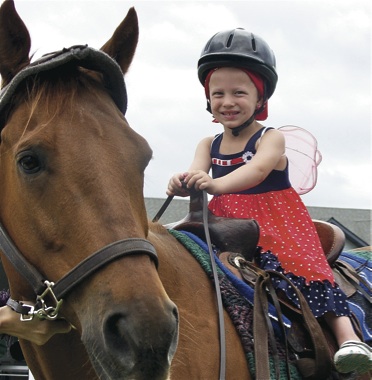 In June of 2004, Shoeman Road Farm in Haslett, Mich., invited local children who were suffering from cancer for a day of horseback riding, making horse treats, and arts and crafts. Dubbed Camp Casey, the event honored the memory of Casey Foote, a horse-crazy girl who found strength and happiness in caring for the Shoeman Road Farm horses while fighting cancer.

“About a week later, I received a letter from a little boy, and it said, ‘Thank you for the best day of my life,’” says Molly Reeser, who orchestrated the event.

What started out as a one-day affair soon turned into much more. “I thought, ‘This little boy got so much out of this and it wasn’t that difficult to piece together, so let’s do it again,’” says Reeser. “So we did it in July and again that August, and for the next three years, once a month we’d have Camp Casey.”

“It was very fulfilling—a beautiful experience for me, the kids, and for everyone who was involved,” says Reeser. So she set about fundraising and turned Camp Casey into a 501(c)3 non-profit program. Today, through interaction with horses, Camp Casey brings joy to children 17 and under who are suffering from cancer, sickle cell anemia or aplastic anemia, giving them some respite from their illness.

Reeser met Casey when she got a part-time job at an English show barn near the university. “Casey was very vibrant, energetic and just a normal horse-obsessed girl who really lit up anytime she was around horses,” recalls Reeser. “But unlike other girls her age, she was going through cancer treatment.”

The horses were therapeutic for Casey, says Reeser. Interacting with them and her friends at the barn allowed her to forget about her illness for a little while. “She wasn’t into showing; she just wanted the experience of loving a horse,” says Reeser. “She brought everybody back to the root of loving the animals; she bonded everybody at the barn together. It was devastating to see a young child go through such a terrible thing, so when she passed away we wanted to do something to honor her.”

Horsey House Doctors
Today, Camp Casey benefits nearly 300 people a year through its two horse-related programs: Horsey House Calls and Cowboy Camp Outs. On a Horsey House Call, the Camp Casey team surprises a child at home with one of its staff equines, a therapist and a group of volunteers. It’s a fun-filled day of horseback riding, a pizza party, and crafts.

“Every weekend we’re at a new child’s home,” says Reeser. “I think the best part of Horsey House Calls is the minute the child opens the door—seeing their reaction. The parents know that we’re coming, but the kids have no idea. It’s very touching and very emotional to see these kids who have been through so much and whose health is so frail get this burst of energy, excitement and strength from seeing this special guest at their house.”

Maggie Sherman, 5, is just one of many lucky kids who have opened their door to find a horse in their front yard. Currently in remission from Wilms’ tumor, a type of kidney cancer, she was the shell of a once happy child when Camp Casey came calling.

“My favorite memory was the look on Maggie’s face when she realized they were there for her,” says her mom, Kandie. “Two months before that house call, we almost lost her. And at that time, she really didn’t smile anymore. She has always been so full of life, and cancer tried to stop it. But as our Maggie says, she kicked cancer’s butt and is better than ever.”

Kandie continues to keep in touch with Reeser and the Camp Casey team, and has been inspired by their efforts to help others in her free time. “What Camp Casey does for the children is far more than just a Horsey House Call,” says Kandie. “They don’t just come to your home once and forget about the child. I am still in touch with them for many different reasons, and I call them family because that is what they are. They make you feel like part of that family.”

Camping with Horses
In addition to the Horsey House Calls, each summer Camp Casey pays for 20 families to go on a Cowboy Camp Out, a weekend horseback riding vacation at a dude ranch. The children and their family members learn about riding and proper horse care, go on a trail ride, and attend a rodeo. “They get to have a vacation during a time when they wouldn’t typically be in the position to plan or pay for one,” says Reeser. “For a lot of our terminal kids it’s great because they’re able to have one final happy memory all together where they’re not in the hospital.”

Blake Beers, 4, was diagnosed with acute lymphoblastic leukemia, cancer of the blood and bone marrow, in 2011. Camp Casey’s Cowboy Camp Out gave him and his family the opportunity to get away from it all.

“The Cowboy Camp Out was such a great experience because we got to be together as a family and get away from home and have vacation time away from the treatments and the doctors and just having to think about it,” says Blake’s mom, Meghan. “I hope they don’t ever stop doing what they’re doing.”

For more information about Camp Casey and its programs, visit www.camp-casey.org.