Jewel was born wild, part of a band of Mustangs living in the scrubby desert region of northern California, in the Red Rock Herd Management Area. At the age of 3, she was rounded up by the Bureau of Land Management (BLM), along with her family, and placed in holding pens. Her beautiful buckskin color attracted the attention of a woman, who adopted her. The woman tried and failed to train the wild filly as a saddle horse—some Mustangs can be difficult to train. Jewel was then passed on to a horse dealer who promised to find her a good home, but instead sold her for slaughter.

It would be nice if every Mustang rounded up by the BLM ended up in a good home. The truth is that not all horses taken from the wild are given the care and training they need to become successful as domesticated horses. Fortunately for some of those horses—including Jewel—a man named Dayton O. Hyde created a safe place for them, in the beautiful Black Hills of South Dakota.

An Oregon rancher, naturalist and author, Hyde started the Black Hills Wild Horse Sanctuary in 1988 with the goal of providing abused, neglected and unwanted Mustangs a place to live out their lives. After struggling for years to create a safe place for these horses, Hyde eventually added more land to the original 8,300 acres of the sanctuary, which now consists of 14,000 acres.

Just 51 miles from Mt. Rushmore, the sanctuary is currently home to more than 600 horses. While most are American Mustangs like Jewel, other equine residents of the sanctuary include a number of other horses that were in need of rescue, as well as several bands of rare and endangered Spanish, Sulphur and Choctaw Mustangs.

Inspired to Rescue
Hyde first came up with the idea of a wild horse sanctuary after seeing the sad state of Mustangs rounded up and being held in pens back in the 1980s. Although they had plenty of food and water, the horses’ spirits were broken by their captivity. Many were too old or unsuitable to ever be adopted, and were doomed to spend the rest of their life in holding pens.

Driven to do something to help these horses, Hyde set out to create the sanctuary, and slowly grew the sanctuary in the historic Black Hills, original home to the Lakota people. Today, the sanctuary is made up of picturesque canyons, meadows and hills, and is fed by the Cheyenne River. The horses spend all the seasons living in bands throughout the sanctuary, roaming at will. Their regular diet of naturally growing buffalo grass is supplemented with grain during the spring, summer and fall, and hay is provided to help them get through the frigid South Dakota winters.

The majority of horses on the sanctuary are monitored daily, visited by sanctuary staffers and the many visitors to this special place. A variety of tours are available year-round to the public, and include everything from a two-hour school bus tour to all-day photography tours. Around 250 horses live in a very remote canyon of the sanctuary, and are not provided any assistance from the sanctuary staff. Visitors wishing for a special tour to see these elusive Mustangs are also accommodated with a daylong Jeep tour. Horse lovers who want to get the full experience of the sanctuary can also rent either of two quaint cabins located close to the visitor center.

Every horse at the sanctuary has a story of abuse, neglect or simply being unwanted. One horse, a gray mare named Angel, was brought to the sanctuary after being saved three times from the kill pen, simply because her conformation was less than perfect. Another mare, a black mustang named Autumn, was discovered close to death after being used in illegal horse tripping events and then starved. A red dun Sulphur Mustang named Cami came to the sanctuary when her owner in California could no longer afford to keep her. A black mare with a white star and snip named Chon-The was born wild, captured, adopted out, neglected (she has permanent scars from where a too-tight halter dug into her flesh) and ultimately sent to slaughter, until someone rescued her and brought her to the sanctuary.

The buckskin filly Jewel, who was rounded up at a young age and eventually sold for slaughter, was ultimately rescued from the feedlot by Oregon-based horse advocate Celine Myers, who then sent the mare to the Black Hills Wild Horse Sanctuary. Now, three years later, Jewel is living wild again, along with her new herdmates, just as a Mustang should.

Liked this article? Here’s more on Mustangs:
The Mustang Mind
Life with Horses: I Meet the Mustangs 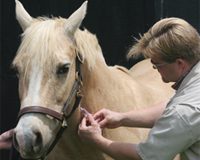