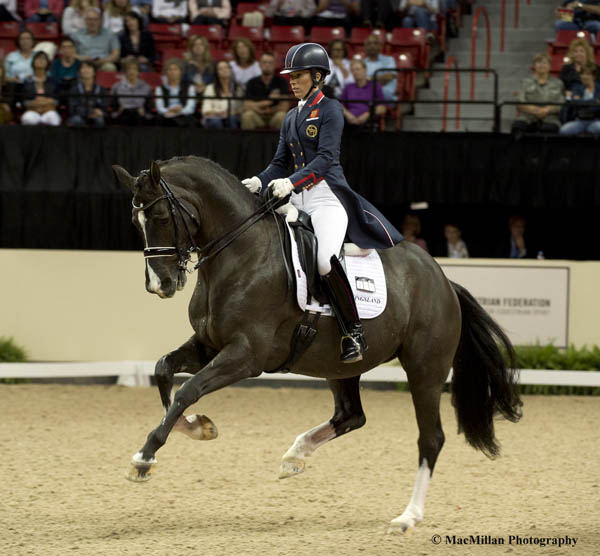 World Cup winners Charlotte Dujardin and Valegro from Great Britain showing lovely canter work in their Grand Prix test that earned them five ‘9’s out of seven judges. The other two judges awarded them an 8 and an 8.5. Photo by Allen MacMillan/MacMillan Photography

There’s a “pins and needles” feeling that you get when you know you are watching a superstar. I’ve been lucky enough to witness of few of these in my lifetime: Secretariat in 1973; Abdullah in the mid-1980s, Totilas in 2010 and now Valegro over the last three years. Of course, none of these horses’ stars would have shined so brightly without their human counterparts. The partnership of Valegro and Charlotte Dujardin from Great Britain is truly special.

As I traveled to Las Vegas for the 2015 Reem Acra FEI World Cup Dressage Finals, I was super excited to be able to witness this pair make history one more time. The first time I saw them together was at the 2012 World Dressage Masters in Florida. I fell in love with Blueberry’s (Valegro’s barn name) soft, round way of going and wasn’t surprised when they finished a very close second to Steffen Peters and Ravel that year. As everyone in the dressage world knows, they went on to double gold in the 2012 London Olympics and individual gold at the 2014 Alltech FEI World Equestrian Games in France. Now I was going to get to see them again in Las Vegas! 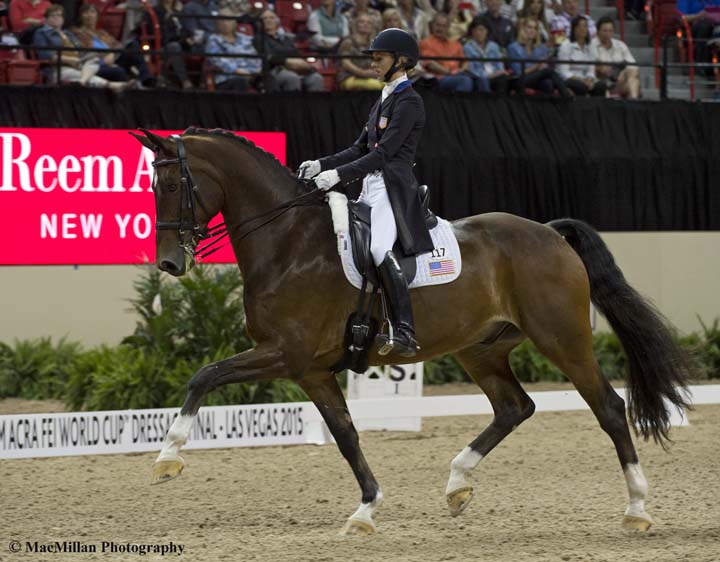 The U.S.A.’s Laura Graves and her gelding Verdades continue to impress following their super performance last summer at the 2014 Alltech FEI World Equestrian Games. They took fifth in the Grand Prix and fourth in the freestyle. Photo by Allen MacMillan/MacMillan Photography

Added to this was my hopeful anticipation that the U.S.A. was sending two very viable contenders in Laura Graves riding her gelding Verdades and Steffen Peters with Four Wind Farm’s Legolas. The 2015 World Cup Dressage Finals featured 18 great horse and rider combinations from nine different countries. I was lucky enough to be there to see them along with almost 11,000 other people in the stands of the Thomas and Mack Center at the University of Nevada Las Vegas, the host of this year’s World Cup competition. Click here for a complete list of the dressage competitors at the Reem Acra World Cup.

The dressage riders had a warm-up class on Wednesday, April 18, then contested the Grand Prix test the next day at noon. All 18 pairs scored well over the required 58 percent to qualify them to return again in the Grand Prix Freestyle on Saturday. As expected Dujardin and Valegro topped the Grand Prix class scoring 83.7%. “I had a great ride, said Dujardin. “I was really happy with the test. I think the first part took me a little bit to get into, but then the canter work felt really good. I enjoyed it and the crowd was great!” 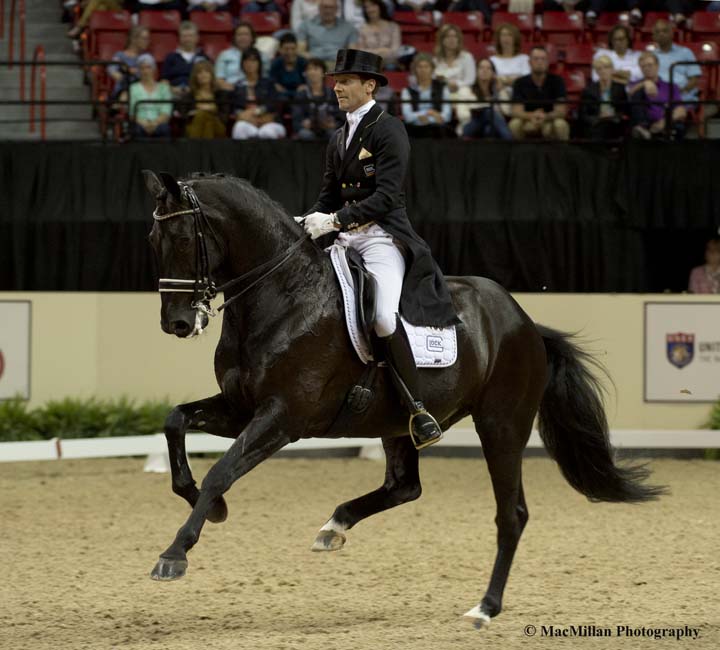 Edward Gal of the Netherlands finessed the sensitive Glock’s Undercover to produce a consistently high-level performance at the World Cup. Photo by Allen MacMillan/MacMillan Photography

Second went to the Netherlands’ Edward Gal riding Glock’s Undercover N.O.P. (79.057%) and third to the U.S.A.’s Peters and Legolas (76.843%). Germany’s Jessica von Bredow-Werndl and Unee BB finished fourth and Graves and Verdades took fifth. After a less than stellar performance with Legolas on the Florida circuit in January, Peters went home to California and played audio tapes of loud applause over and over again to desensitize Legolas and prepare him for the atmosphere at the World Cup. “It’s so exciting! I can guarantee you that I’m probably even more excited than the two of them put together,” laughed Peters, referring to Gal and Dujardin. “First of all, I’m so proud of Legolas. It’s been a very long, difficult and challenging way to prepare for this and I’m so glad it worked out.” 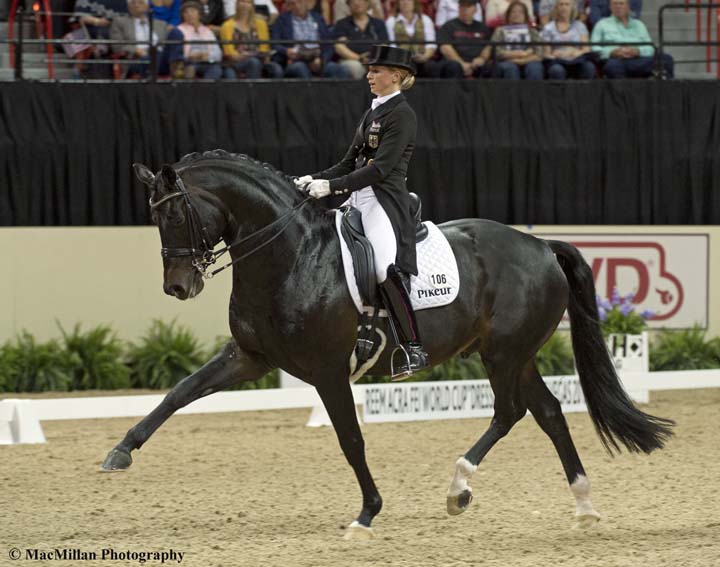 Third place finishers Jessica von Bredow-Wendl and Unee BB from Germany. This pair is one to watch for Rio next year. Photo by Allen MacMillan/MacMillan Photography

Saturday’s freestyle class was nothing short of fabulous from start to finish. Valegro and Dujardin scored 94.156% to win the gold. This was just short of their all-time best score, but still an easy win for the pair and history making for a ride in the U.S.A. Of course, everyone including the judges like Dujardin’s and Valegro’s test and the applause was deafening after their final halt.

Dujardin talked about her freestyle ride, “I had a really good ride and it’s an incredible feeling. Having a horse like Valegro is just amazing. He goes into that arena to perform – all I have to do is steer. I wasn’t sure how he would cope with all those people, but I think he loved the American crowd!” 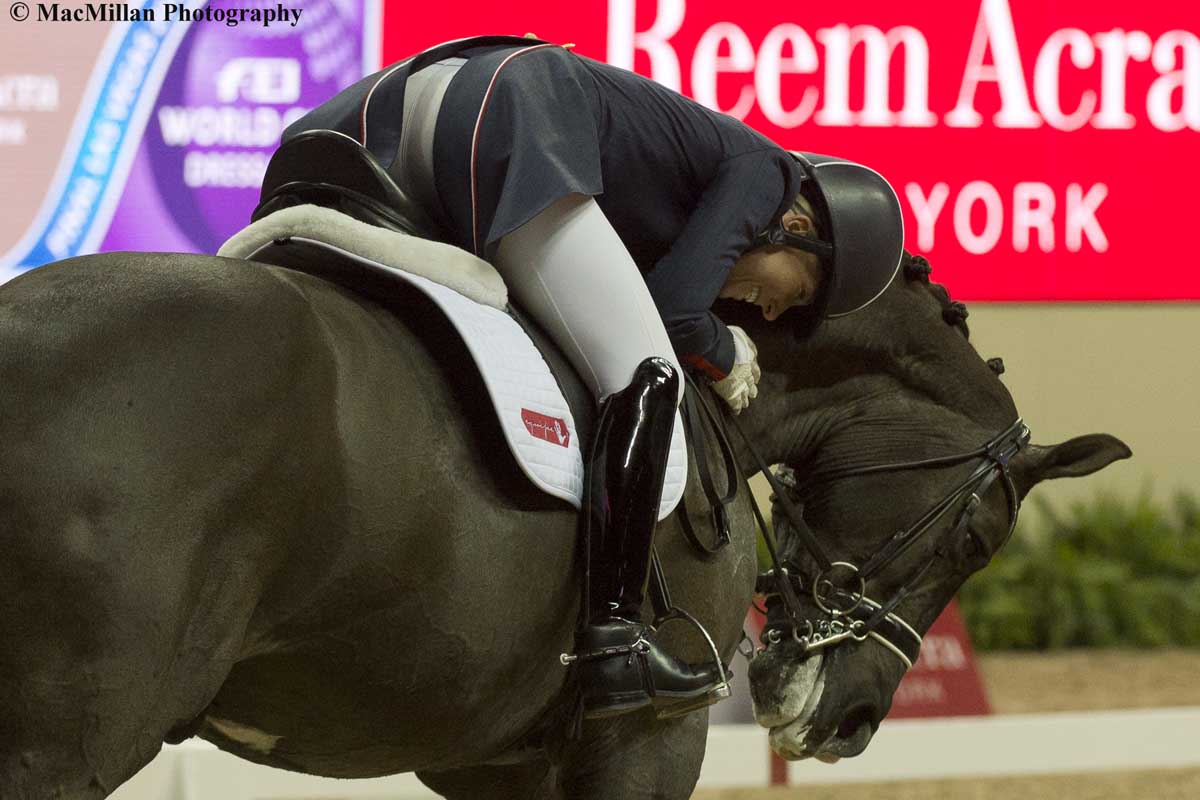 Blueberry gets a big hug from Dujardin after their final halt and salute of their Grand Prix test. Photo by Allen MacMillan/MacMillan Photography

Gal and Undercover put in another impressive test (84.696%) to take silver with Germany’s von Bredow-Werndl and Unee BB moving up to the bronze spot (80.464%). Graves and Verdades finished fourth scoring 79.125%. “I couldn’t be more pleased with him,” said Graves. “This is my first trip to Las Vegas and it feels very surreal!”

I loved each and every test, but von Bredow-Werndl’s and Agnete Kirk Thingaard’s tests were very spectator friendly and the crowd really connected with the riders during their tests. Von Bredow-Werndl’s test began with a quote from Martin Luther King’s “I have a dream” speech in King’s voice and then concluded with her voice and a variation of the speech, “I have a dream that all animals will be treated with kindness….”

Peters and Legolas performed a beautiful, light-hearted freestyle that began with a voice over by Legolas (with help from a human) at the beginning. It was tons of fun to watch and scored over 80%. The lone disappointment from the day was when the judges announced that they had noticed a bloody spur mark on Legolas’ side and that the pair was disqualified according the FEI’s hard and fast animal welfare rule. I don’t think anyone in the stadium thought for one moment that the Peters spurred him on purpose. He is a very soft, empathetic rider and he loves his horses, so there’s no doubt in my mind it was an accident. It was reported that Legolas shied at something sometime before the test and it’s my theory that he shied into Peter’s spur leaving the mark as Peters asked him to go forward to enter the ring.

On the up side, one interesting thing that happened in the press conference following the freestyle competition was that the fashion designer Reem Acra (the sponsor of the competition) made an appearance. She offered to design both Dujardin’s and Graves’ wedding dresses when the timing is right. Edward Gal, who was also in the press conference joked that it was a good thing that he didn’t win since he didn’t need a wedding dress! Dujardin is engaged, so for her to receive the generous offer was perfect. I foresee a fashion photo shoot in the making!

Beyond the top-notch competition, the World Cup venue offered a large gift show where you could shop ‘til you dropped and many mini-Vegas shows were incorporated into the competition sessions. Everyone from Elvis to Lady Gaga (both portrayed by tribute artists of course) made appearances.

The snippets of conversation that I overheard riding to and from the venue on the World Cup Express shuttle busses were filled with plans for going out to dinner or a show or to the casinos to try their luck gambling. One group of ladies was considering going to see the Australian Thunder From Down Under male dancers….but, I didn’t need to know what they decided, so I turned my attention to looking out the window as the lights of Vegas floated by the bus.