There are millions of horses in the United States and many of us have had the pleasure of forming a bond with at least one of them (well, more likely it’s a whole lot more than one). We’ve all probably seen a horse or two grow old. Some die of natural causes and some are euthanized. Sometimes old horses are given up at auction where they are at risk of being sent to slaughter. In those cases, organizations such as Gentle Giants Draft Horse Rescue do their best to bring these former carriage and work horses with them where they’ll pass the time in a loving environment while hopefully waiting for their forever homes.

Back in December of 2014, a video was posted on YouTube about Gentle Giants Draft Horse Rescue that has recently received some attention online. In it, several horses are shown in their new – and possibly temporary – home at the rescue. They have open space, are cared for by veterinarians and seem to be enjoying their new lives. The nonprofit really does as their names suggests: they rescue draft horses, often adopting them into new homes as school or trail horses, according to the YouTube description. Their motto, as Gentle Giants president and founder Christine Hajek says, is “Rescue, Rehab, Retrain and Rehome.” That sounds like a great motto to us. 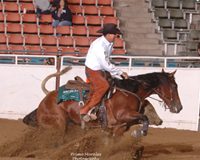