The Belmont Stakes will be broadcast live on NBC Sports starting at 4:30 pm EDT on June 6th. Be sure to tune in and watch as American Pharoah tries to make history!

Liked this article? Here’s more on Thoroughbred racing’s Triple Crown:
A Look Back at Triple Crown Contenders
Video: Chromie is My Homie 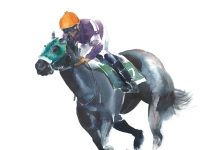