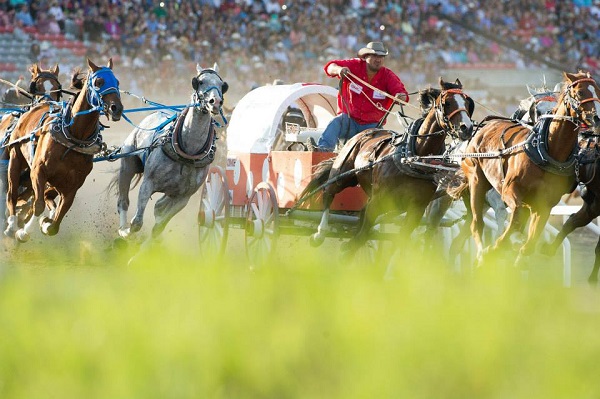 The annual Calgary Stampede in Canada is meant to be a celebration of western culture, community spirit and agriculture. In some ways, it may be. However, the chuckwagon races are often a dark spot in the celebration because the event has marred by the deaths of many participating horses (over 50 since 1986, according to Global News). This year was no different.

On Saturday, after breaking his leg, a horse was euthanized. Then yesterday, a second horse had to be put down due to injuries sustained during the competition. He was euthanized under veterinary recommendation after he was injured when two rigs collided during the chuckwagon race, Global News reports.

Many organizations believe that the chuckwagon competition consists of “inhumane rodeo practices.” One such group, Animal Justice, is appealing to the Calgary Humane Society. The Animal Justice Director of Farmed Animal Advocacy, Anna Pippus, told Global News, “The democratically enacted laws of Alberta unequivocally state that it is illegal to cause or permit animals to be unreasonably in distress… The appropriate course of action for a law enforcement body that has grave animal welfare concerns with particular activities is to prosecute those activities for unlawful animal cruelty, not to declare its opposition in policy statements.”

The Stampede’s Chuckwagon Safety Commission, which calls the horse deaths “extremely regrettable,” determined that B.J. Carey, owner of the recently euthanized horse and Shane Nolin, the other rig driver are both responsible. Rules stipulate that the owner responsible pays the owner of the horse $10,000. However, given that both men are at fault, Nolin is required to pay Carey only $5,000, according to Global News. The commission is reportedly looking into how to make the race cleaner and safer.

German equestrians take an early lead in day one of Olympic...