Great Abaco Island in the Bahamas was home to wild horses, known as Abaco Barb or Abaco Wild Horse. The breed was brought over by a logging company from Cuba sometime toward the end of the 1800s. By the 1940s, when the company began utilizing tractors, the 200 horses were set free, ABC News reports. In the 1960s, a child came upon one of these horses and tried to ride it. It goes without saying how dangerous attempting to ride a wild horse can be and unfortunately the child died.


As a result of that incident, “All but three [of the horses] were slaughtered,” according to the Abaco Preservation Society Facebook page, “They came back to 35 animals by the mid 1990s. But a hurricane pushed the horses out of their now destroyed forest habitat, where they had thrived for so long, into a lush and toxic citrus plantation that was hurricane-damaged and littered with chemicals, destroyed buildings, too-rich pastures, and poisonous plants.”

An endangered breed, the Abaco numbers went from 200 a mere 60 years ago to just one in recent years. Sadly, that one horse, a mare, has died. Her name was Nunki. She was 20.

The Wild Horses of Abaco Preservation Society project director, Milanne Rehor, told ABC News that a veterinarian from the United States took tissue from the mare. The tissue was then sent to Austin, Texas for an attempt at cloning to bring back the breed.

“We are sad at the loss. But we are also optimistic because we do have a crack at bringing the herd back,” Rehor told ABC News.

Wild Horses of Abaco Preservation Society believes the bloodlines are worth saving due to their unique historical significance. According to their Facebook page:

Wild Horses of Abaco’s primary objective is the prevention of the extinction of the Abaco Wild Horses, now to be known as the Abaco Spanish Colonials. DNA proven to be direct descendants of the horses brought to the New World by the Spanish Conquistadores.

While Rehor is hopeful the cloning will work, others are doubtful that such a plan will succeed. A clinical professor with the Department of Veterinary Medicine and Biomedical Sciences at Texas A&M University, Ernest Cothran, told ABC News that even though he wouldn’t say the attempt is impossible, he would be surprised if it worked.

What do you think? Can cloning bring back the wild horses of Great Abaco Island?

Liked this article? Check out these about the Abaco wild horses:
Wild Horses on Great Abaco Island
The Man Behind the Lens 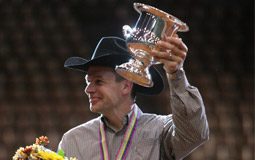