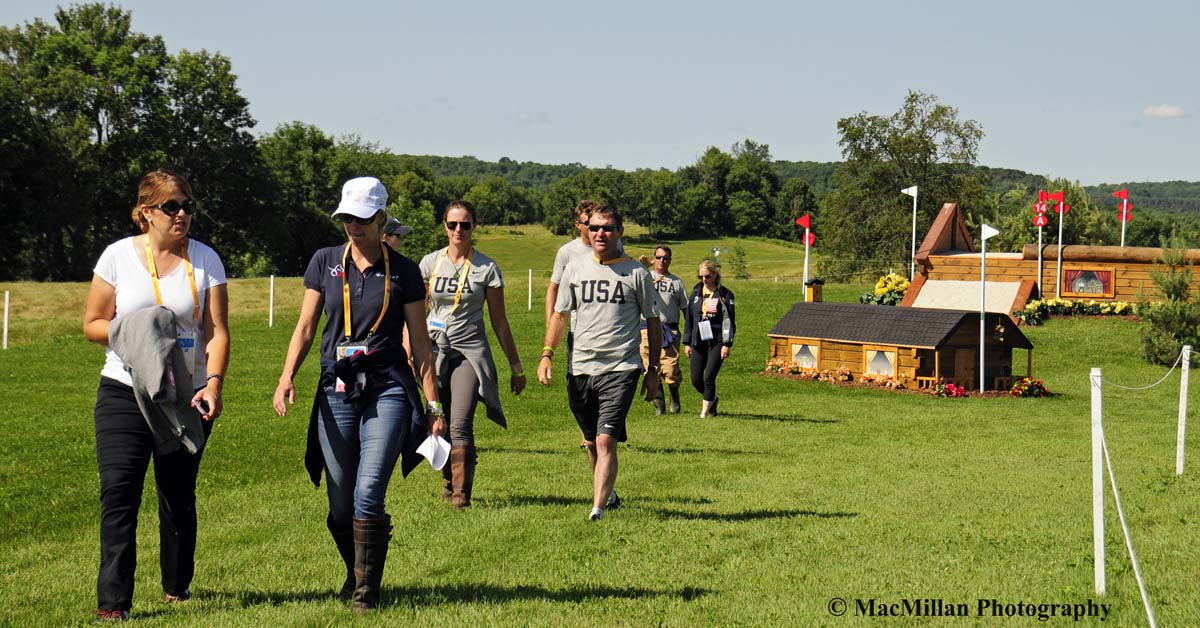 On the morning of Thursday, July 16, we were out on the new CCI2* course at Will O’ Wind Farm, Mono, Ontario, the host of the Pan American Games cross-country for the eventing. We were escorted by Graeme Thom, course supervisor and a member of the Pan Am Eventing Committee, and former chef d’equipe for the Canadian Eventing Team. The course was designed by Wayne Copping from Australia. 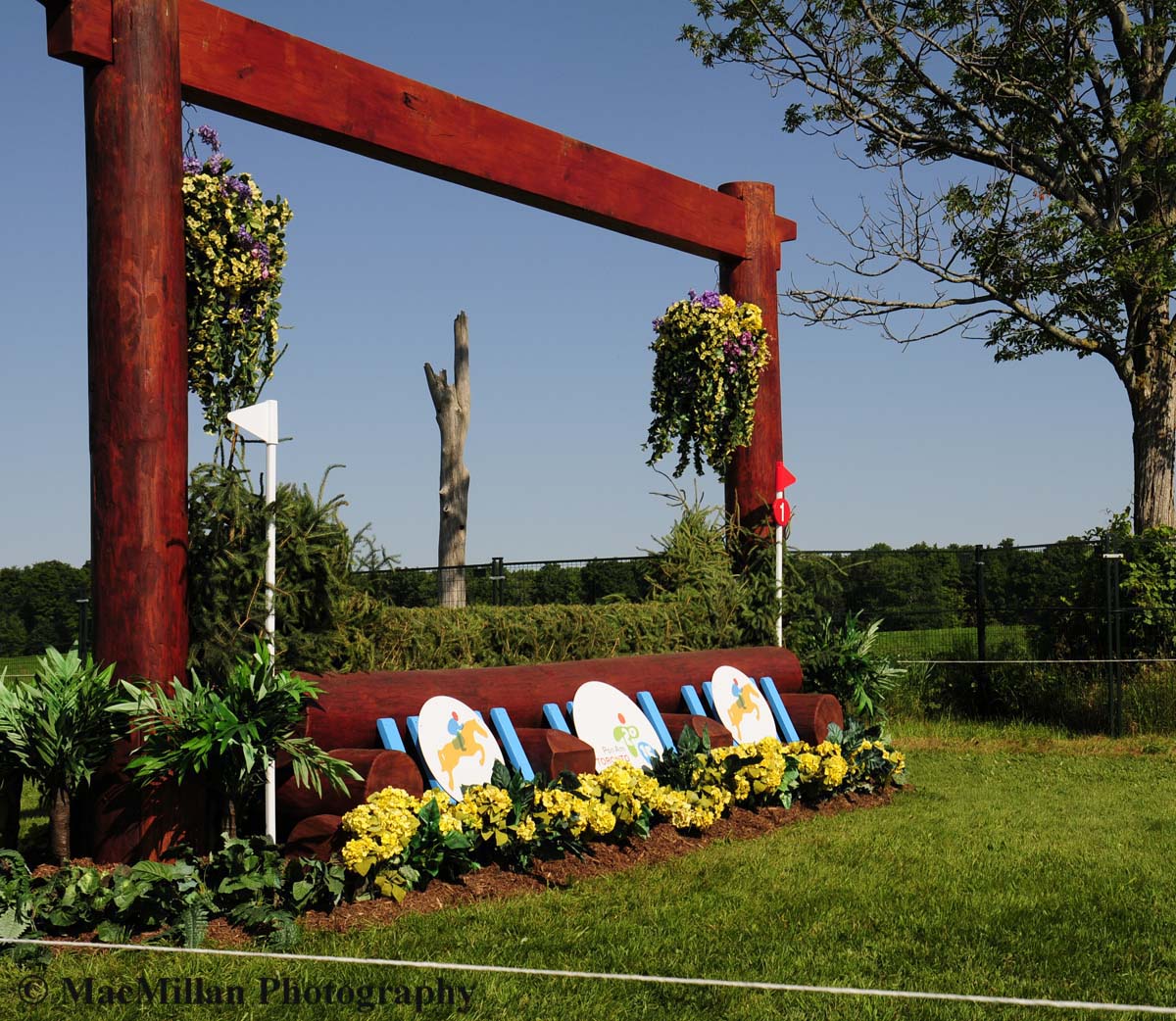 Fence # 1, the Pan Am Arch. Photo by Sarah Miller/MacMillan Photography 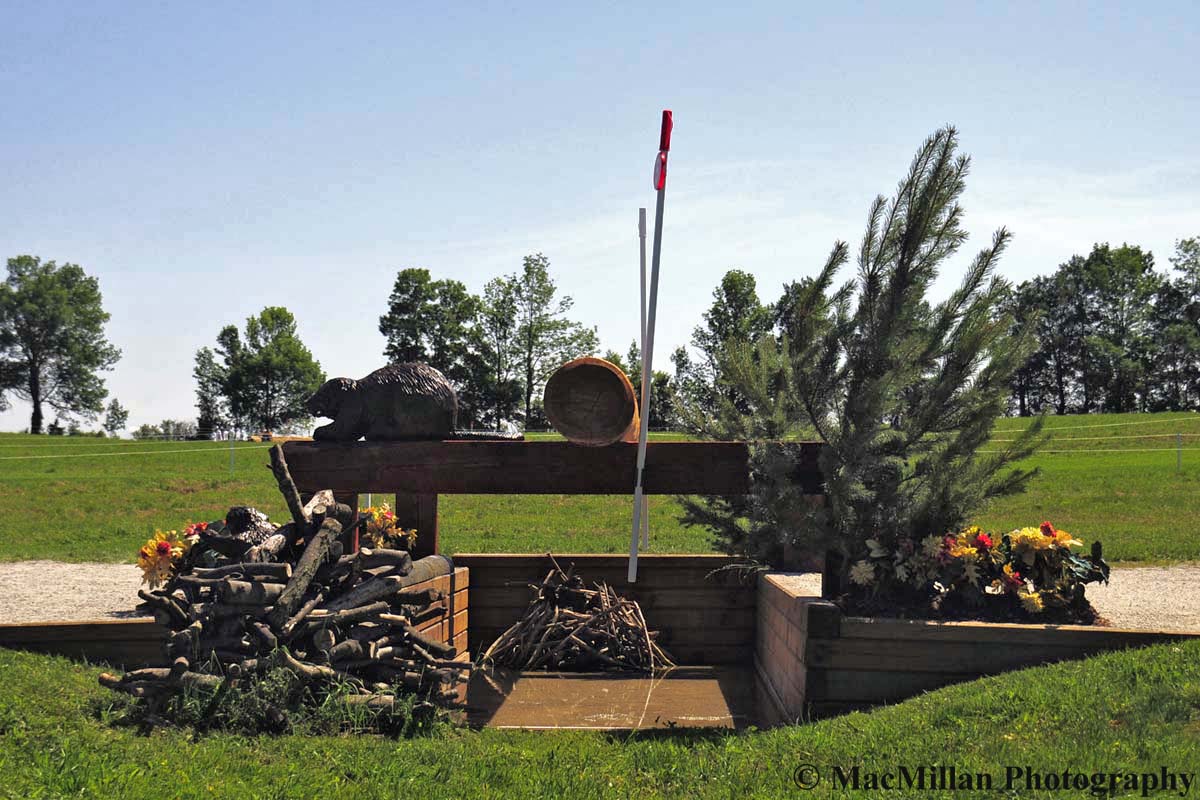 Fence # 5, the Beaver Dam Trakehner. Photo by Sarah Miller/MacMillan Photography
While on course we also had a chance to visit with the course builder, Eric Bull, from Virginia, who told us that many of the portable jumps on course were constructed in Virginia and moved via flat-bed semis to Canada. The galloping track was in great shape thanks to the efforts of Klaus Zander who operates a turf business in the area. His team had been aerating and rolling the course as needed this spring and summer. Graeme was hoping for a bit of rain tomorrow, Friday, in order to keep it soft for the cross-country on Saturday since the soils on the farm have a layer of gravel very close to the surface which can make the ground dry out and become hard quickly. 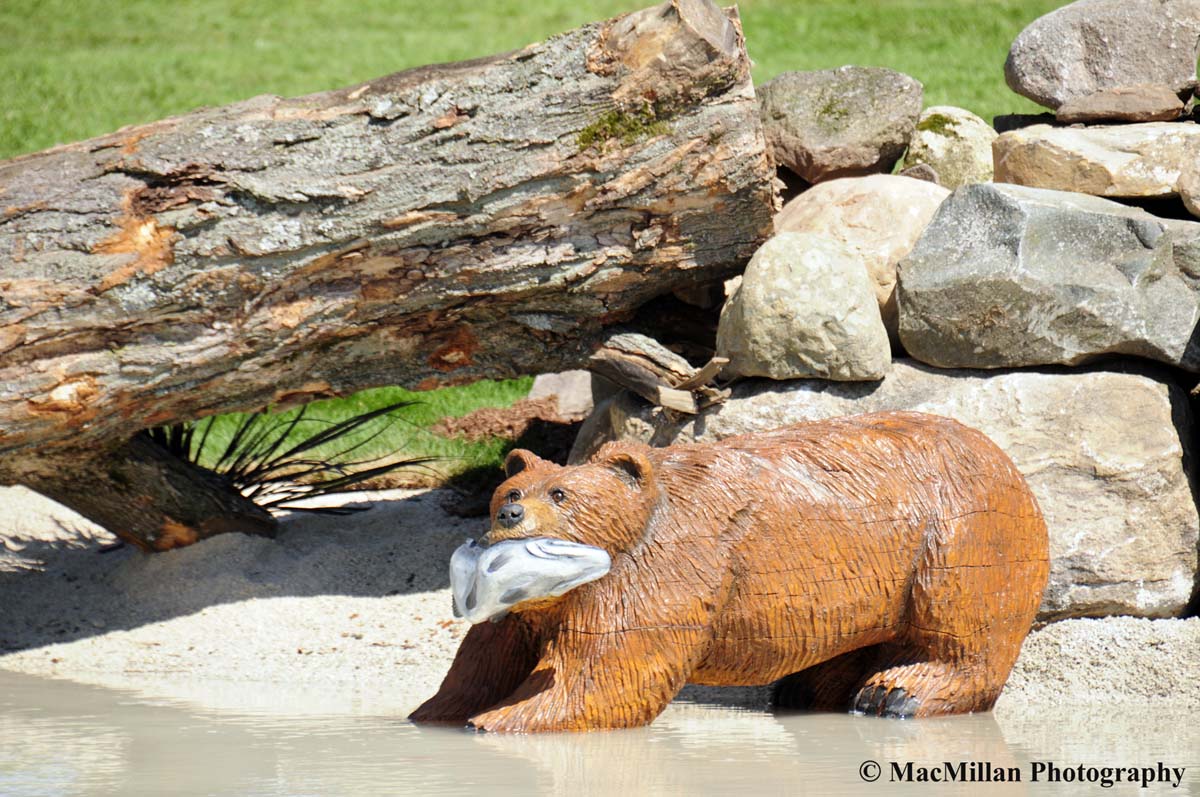 A bear with his freshly caught salmon at the water complex at obstacle #20. Photo by Sarah Miller/MacMillan Photography 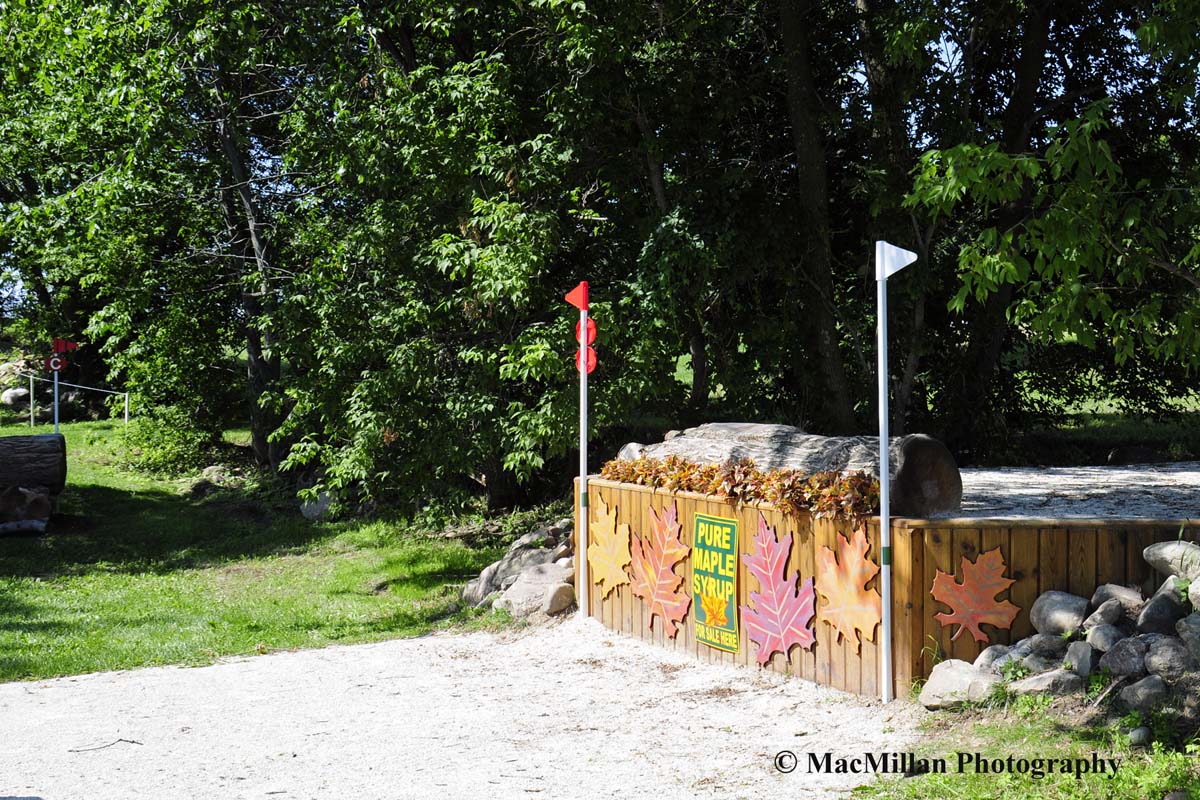 After leaving the cross-country course we traveled on to the Caledon Equestrian Park where the first horse inspection for the eventers was slated to take place. A brisk pace and 54 minutes was all it took to inspect 49 horse and rider pairs at the 3 p.m. inspection. Unlike the dressage inspection, no horses broke loose this time. There were only two occasions where a horse put in small rear which evoked a collective gasp from the crowd and showed that these horses are ready to run. 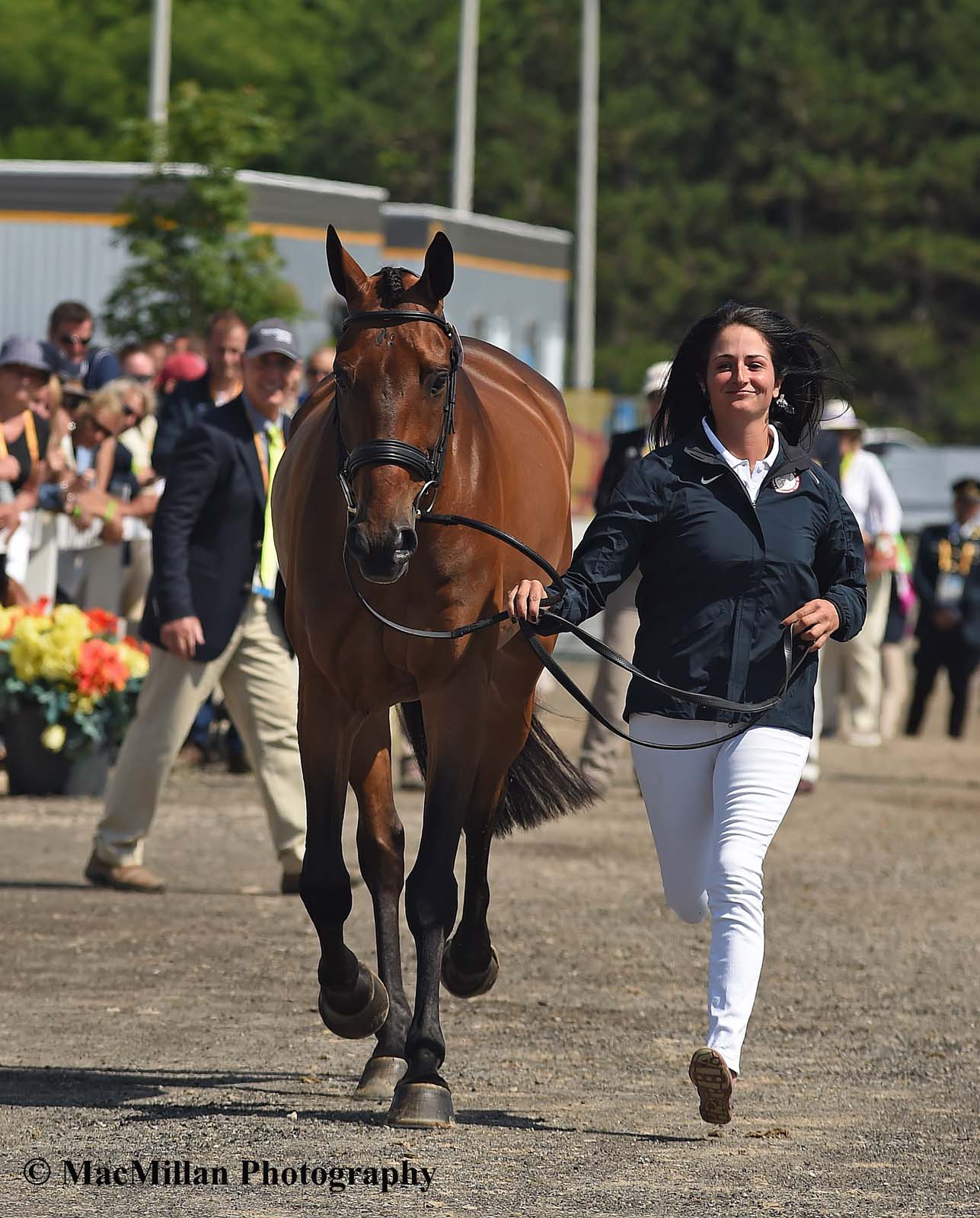 Jennifer Brannigan and Cambala of the U.S.A. at the first horse inspection for eventing . Photo by Allen MacMillan/MacMillan Photography

Happily all of the horses from the U.S.A. passed inspection without incident.

Mauricio Bermudez and Pepper Shot, the fifth and presumably the reserve horse from Colombia, jogged twice in a row and then were held in the box for a second look later. When they re-presented nine horses later in the order, Pepper Shot was not accepted and therefore is out of the eventing competition for the 2015 Pan Am Games. 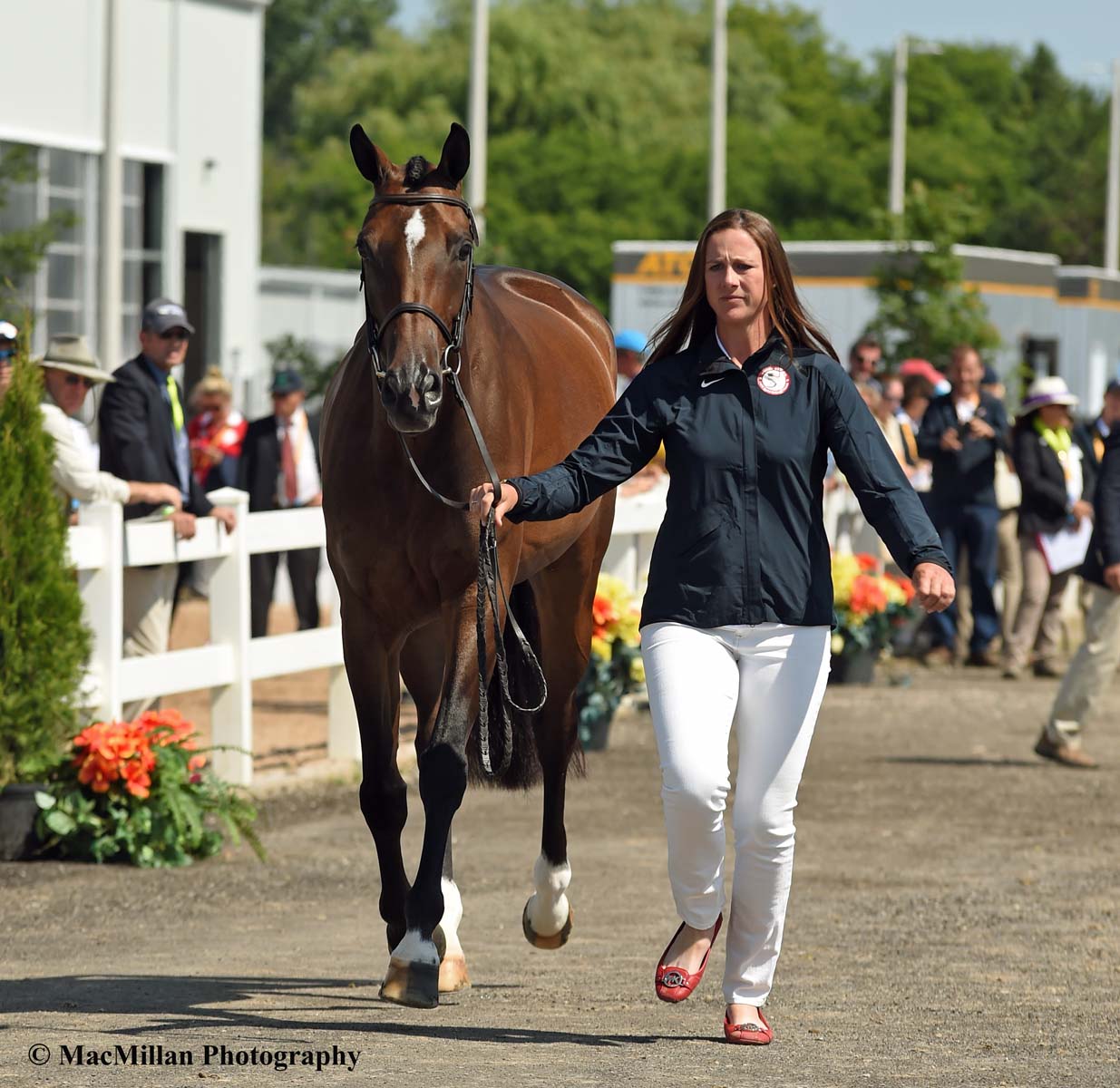 Lauren Kieffer and Meadowbrooks Scarlet of the U.S.A. Photo by Allen MacMillan/MacMillan Photography

Sergio Iturriaga and Versalles from Chile got to trot the track twice in a row, but they were finally accepted without a hold.
Rodrigo Abella Lemme and SVR Arbitro from Uruguay were held for a second look. When Rodrigo re-presented Arbitro eight horses in the order later he was accepted. 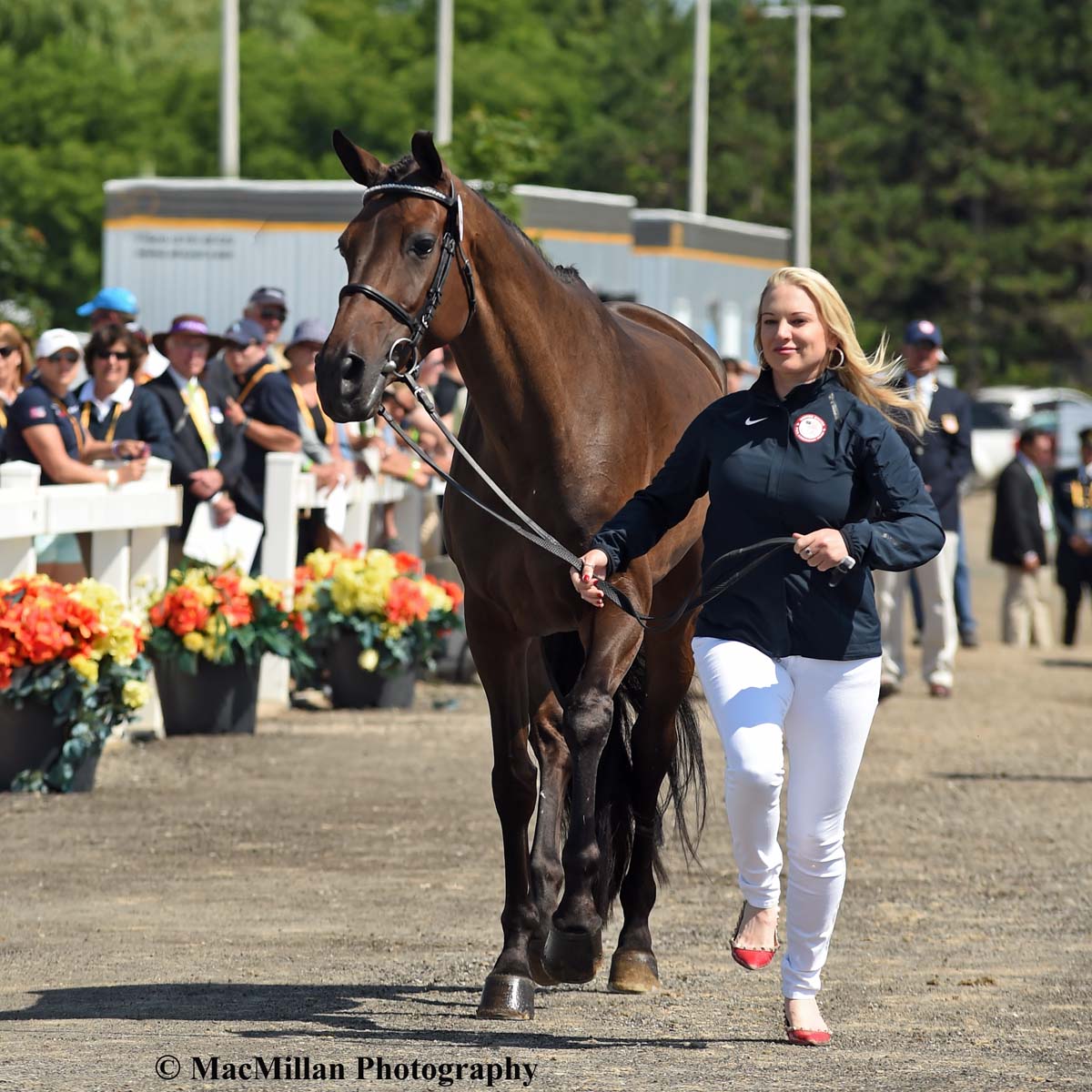 Marilyn Little and RF Scandalous of the U.S.A. Photo by Allen MacMillan/MacMillan Photography

Guillermo De Campo and Quelite from Mexico were also asked to jog twice in a row. The committee took 16 long seconds to discuss what they saw, but then accepted the pair. 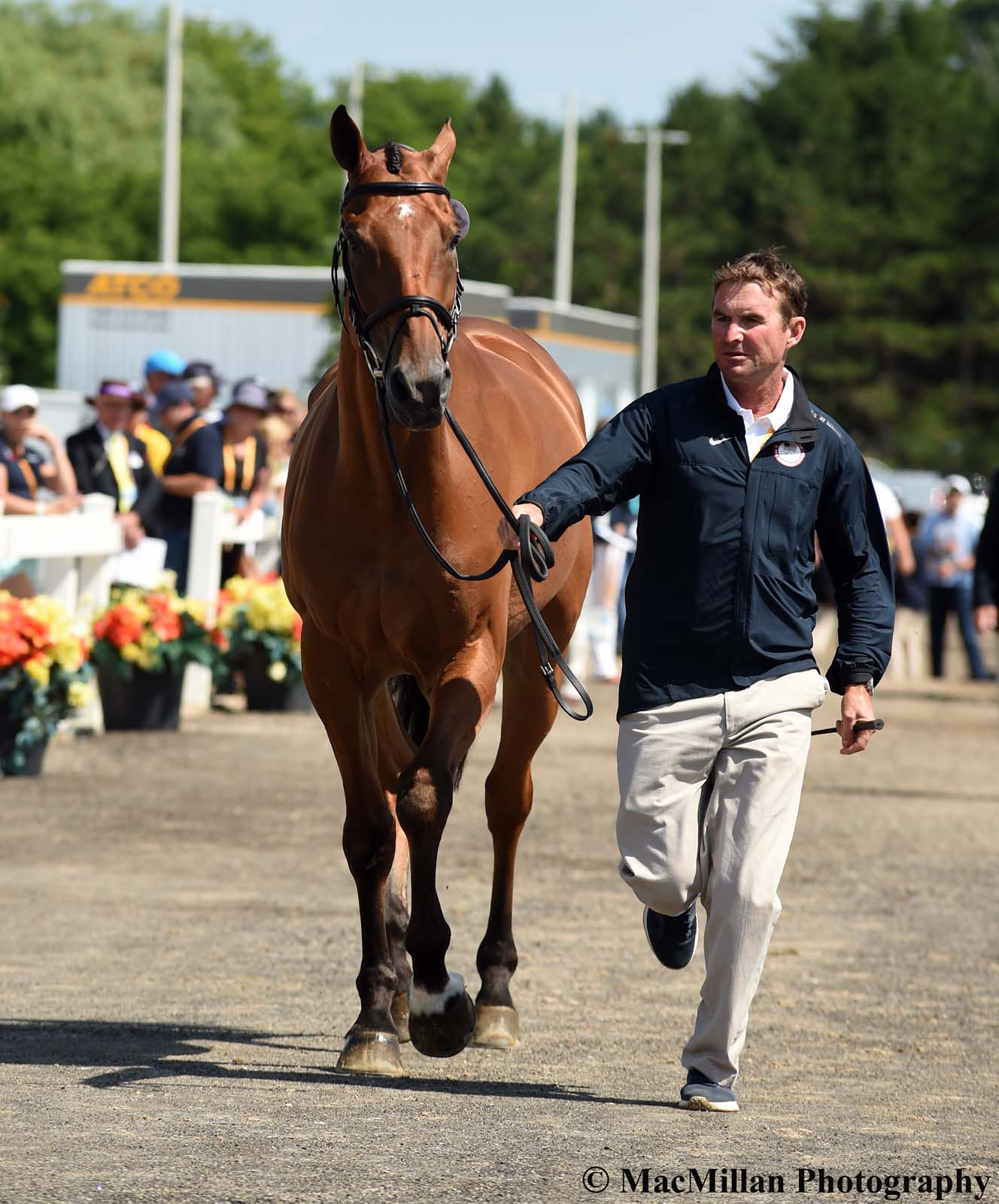 Phillip Dutton and Fernhill Fugitive of the U.S.A. Photo by Allen MacMillan/MacMillan Photography

The tense moment for the Canadian home team occurred when Colleen Loach and Qorry Blu d’Argouges were held after the first trot. The crowd was murmuring that Qorry was trotting with a very low head carriage and that perhaps there was something wrong. They re-presented after eight horses and the low head carriage was still there for the trot out away from the inspectors. But then Colleen made the turn and got his head up and came back with six strong, forward, regular strides to finish the presentation. It was very quiet for a few seconds, but then came the announcement, “accepted, exit.” 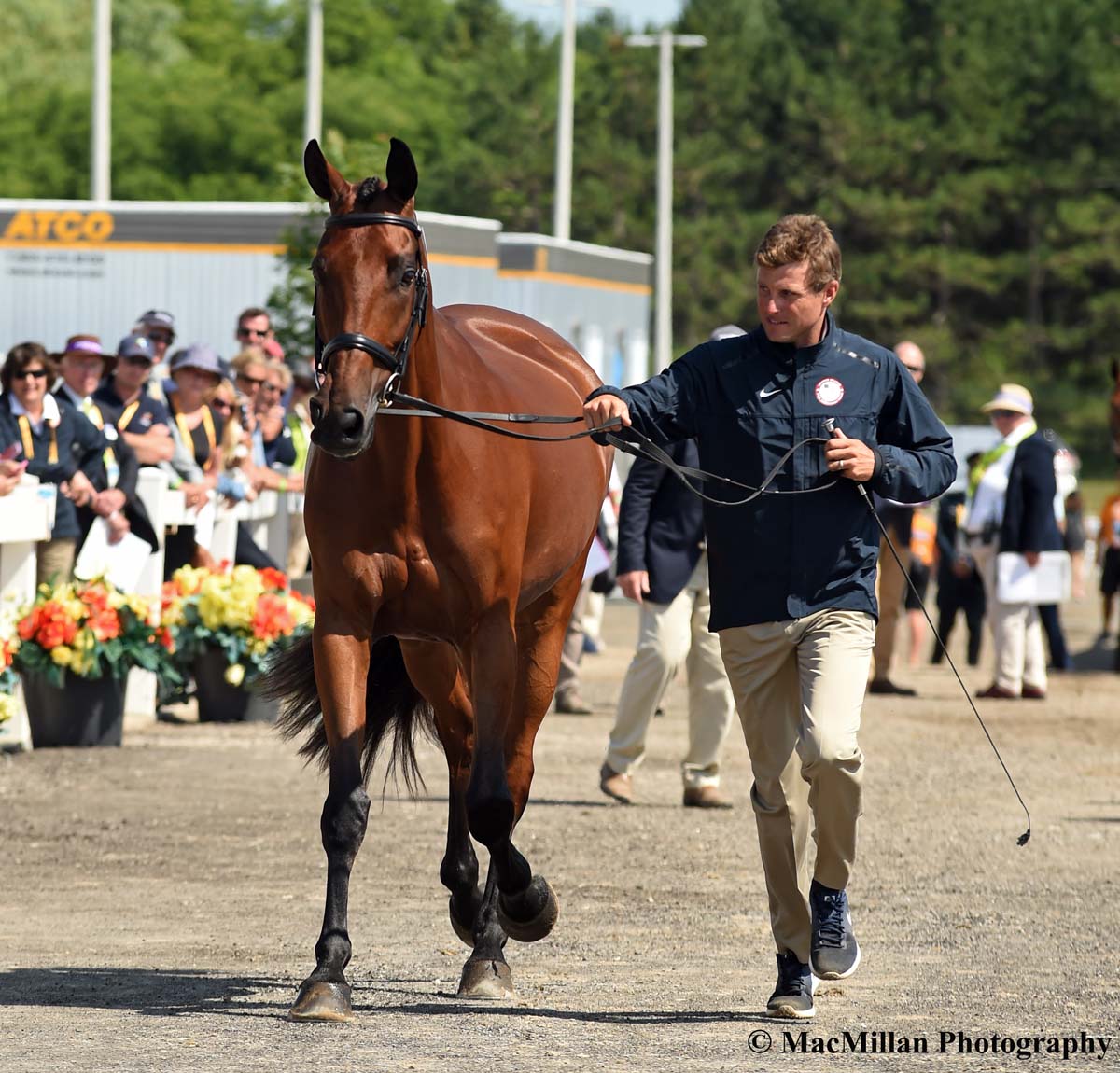 Boyd Martin and Pancho Villa of the U.S.A. Photo by Allen MacMillan/MacMillan Photography 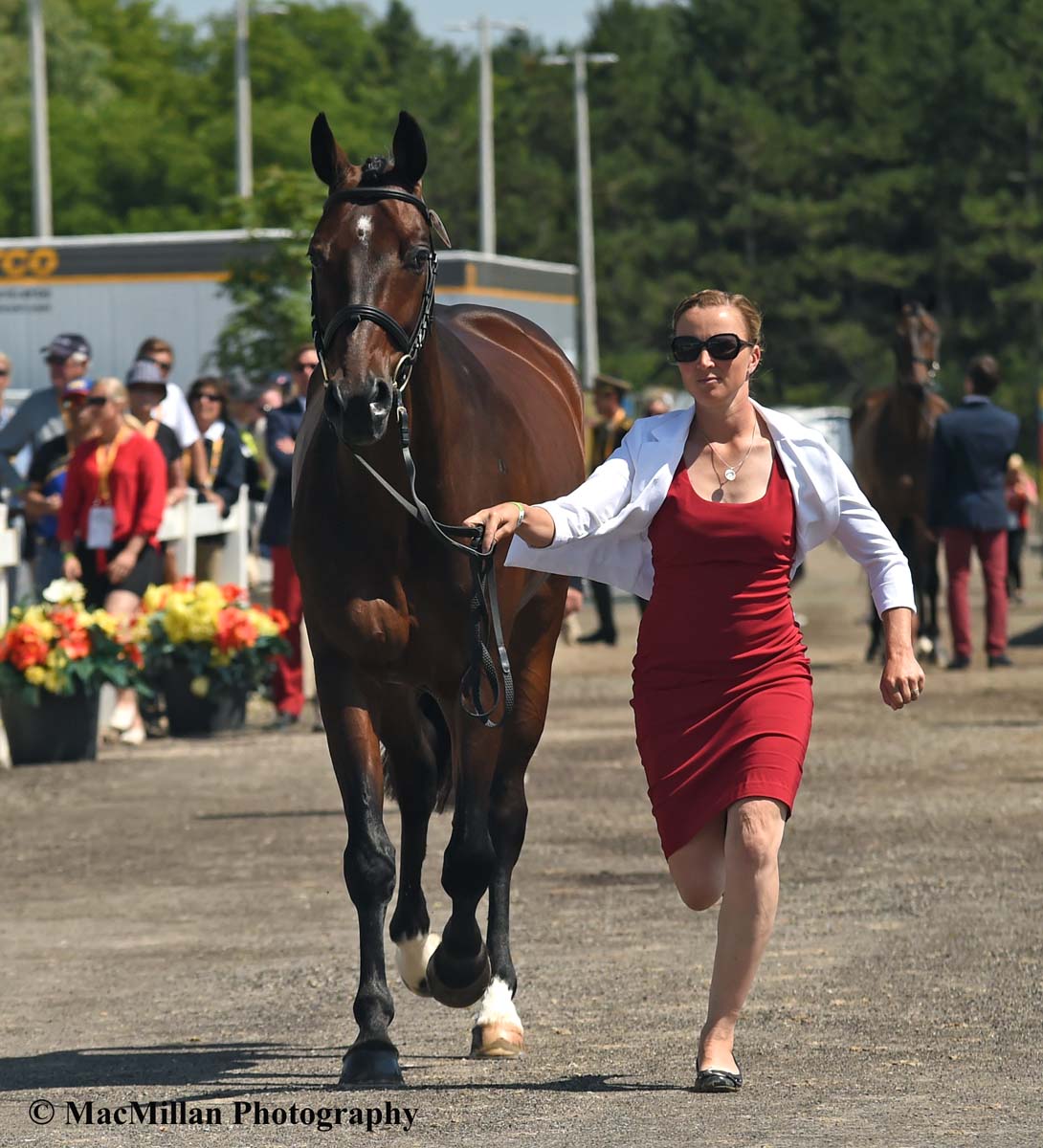 Reigning Pan Am Games gold medalist from the 2011 Games in Guadalajara, Jessica Phoenix of Canada with Pavarotti. Photo by Allen MacMillan/MacMillan Photography 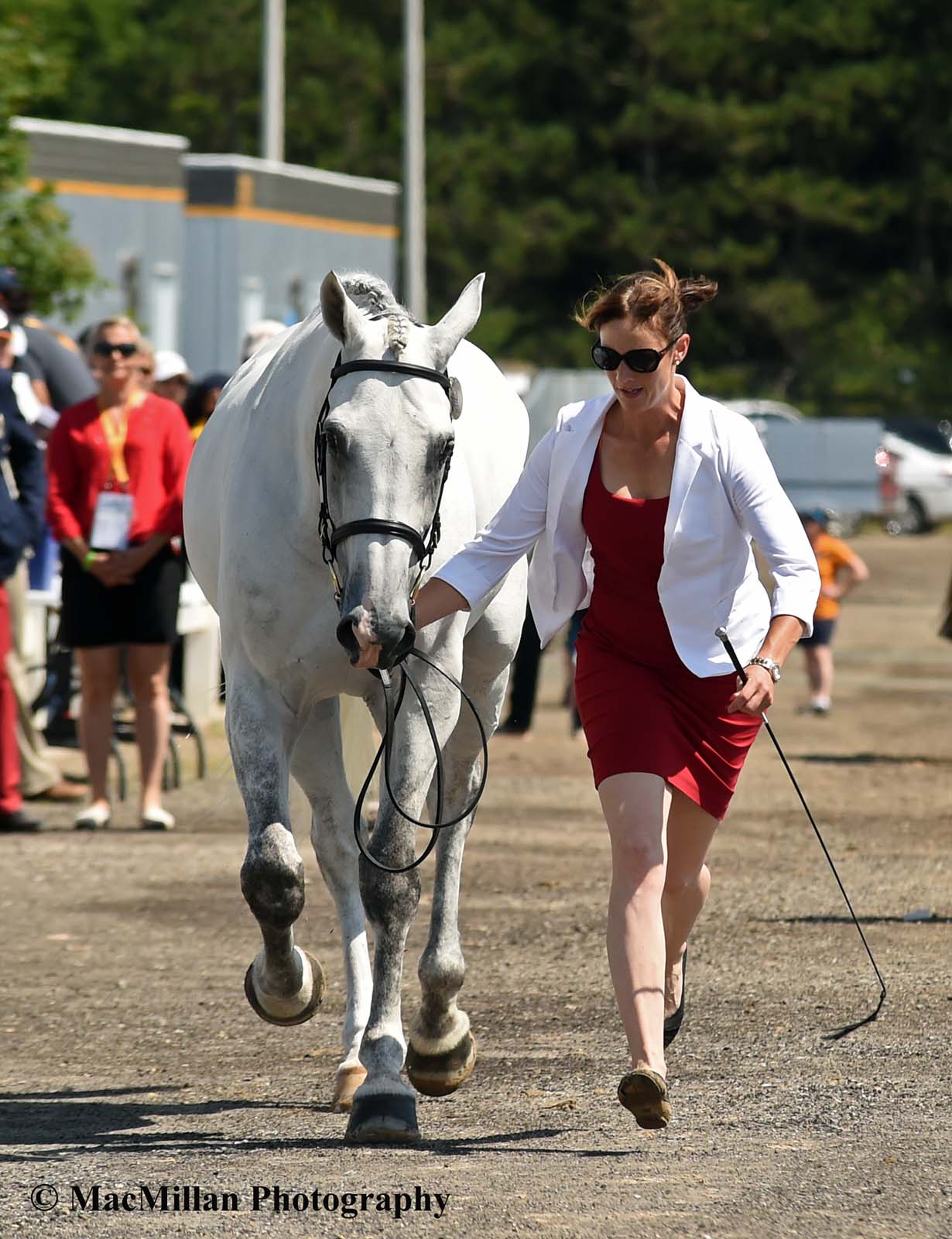 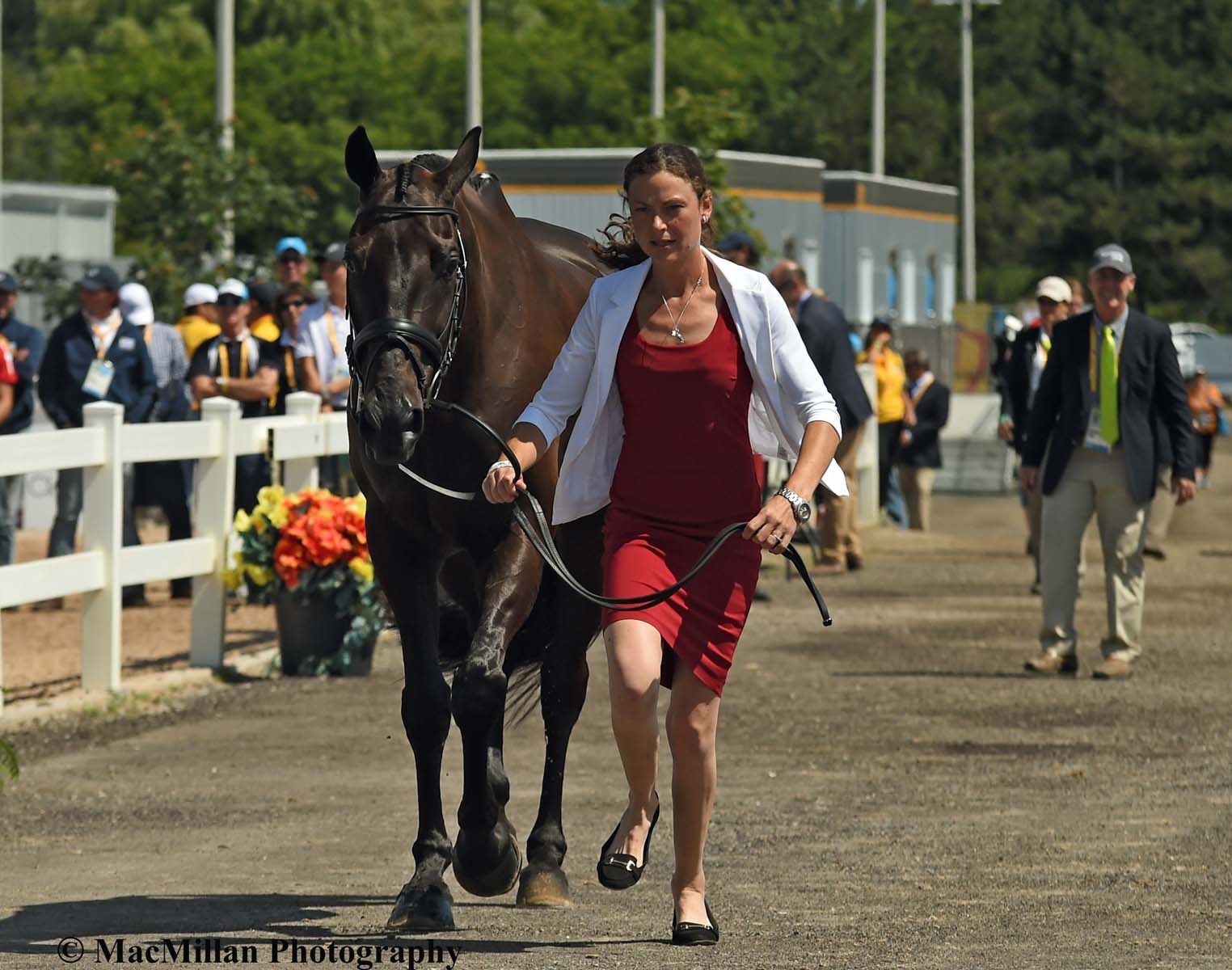 Kathryn Robinson of Canada with Let it Bee. Photo by Allen MacMillan/MacMillan Photography 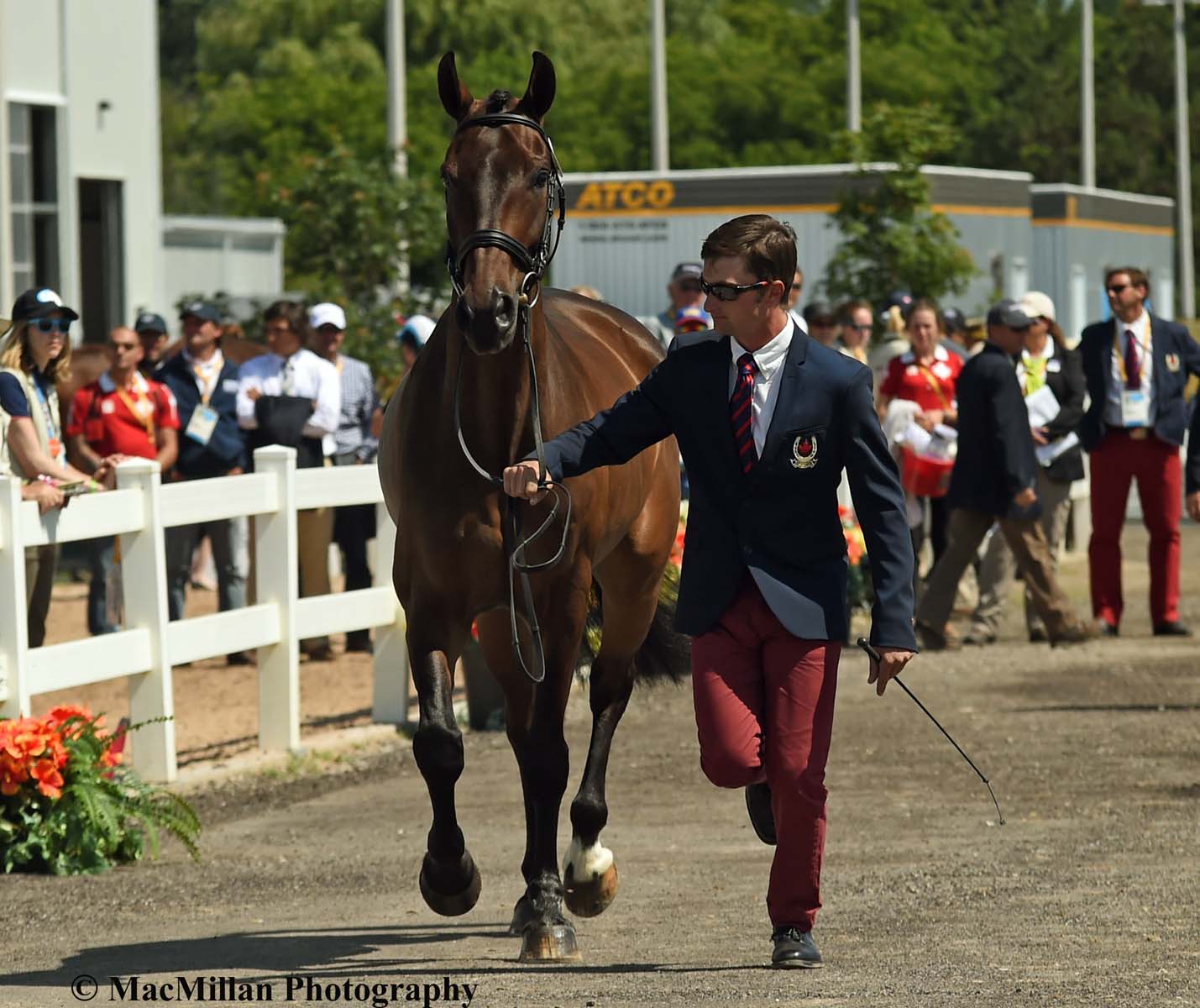 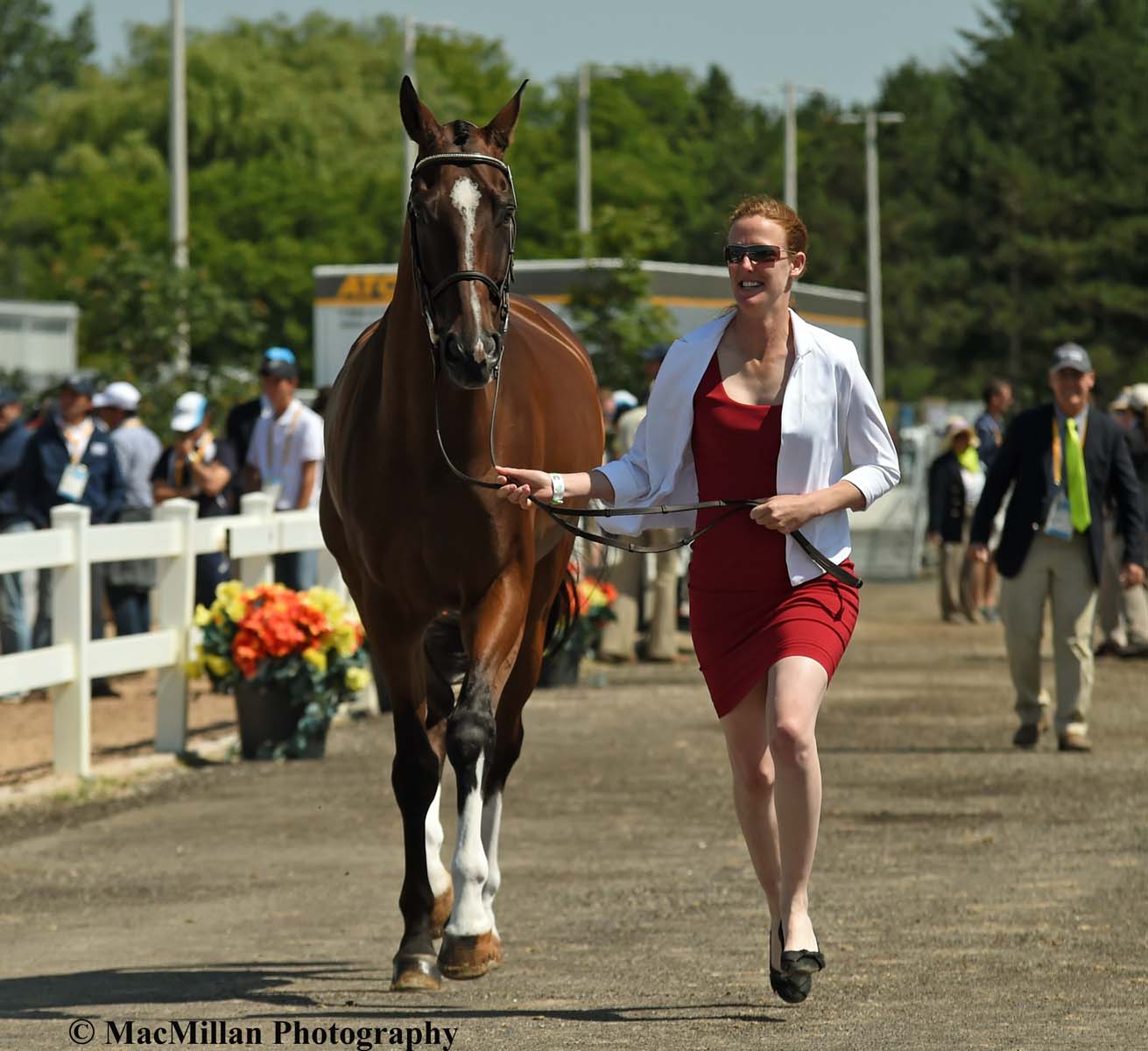