Home Horse News The Horse with the Horse on His Back

When Wendy Bulmer of the Flying Hall riding school in the U.K. purchased a horse for the school she had no idea the mare was in foal. The following May she gave birth to a tricolor pinto Bulmer named Da Vinci, or Vinny for short. Why Da Vinci? Because of his unique markings on his coat. He’s got a little heart on his bottom and the image of a horse on his neck and shoulder.

Even though Bulmer said she wasn’t too pleased that the mare was pregnant, according to Daily Mail, Vinny “is so friendly and the kids love him.” The children at the school have been a part of Vinny’s life since he was born, which is not only a good experience for the students, but, as Bulmer says in the video, “It’s made him really friendly and very sociable.”

Do any of your horses have unique markings? Post a photo on the Horse Illustrated Facebook page. 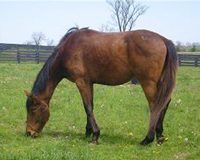