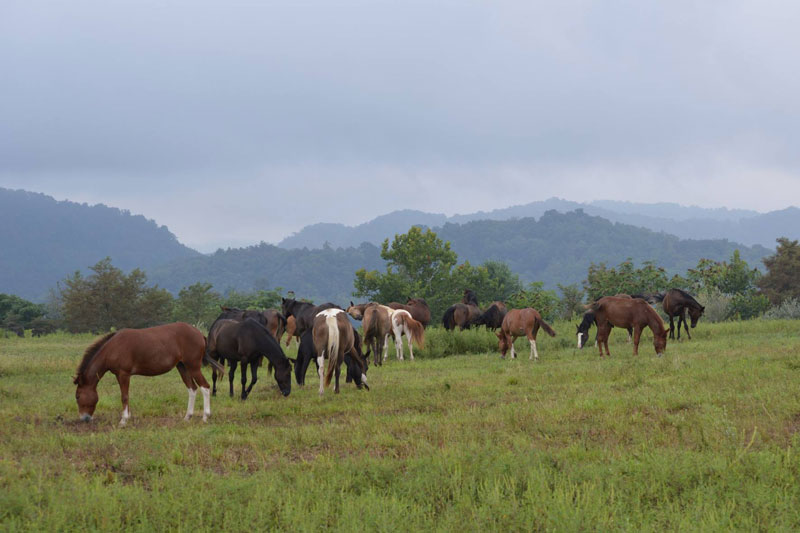 Horses have been turned out to graze on reclaimed coal lands in Eastern Kentucky for years, but with more owners abandoning their horses, the effects of overpopulation are causing problems for the horses and nearby human residents.

Kentucky is renowned for many things, including its beautiful bluegrass, breathtaking Thoroughbred farms and for being the birthplace of bourbon.

In addition to its signature equine industry, Kentucky is one of the leading states for coal production, with 60 percent coming from underground mines and the remainder from surface mines. Both coal and horses are intricately woven in to the fabric of Kentucky, uniting generations of people from all walks of life.

Recently the coal and equine worlds have collided.

Lori Redmon, President and CEO of the Kentucky Humane Society (KHS), has been involved with horses for over 10 years, and as an avid equine lover, she was hoping to give back to the equestrian community as a complement to her position at KHS, which dealt with solely dogs and cats. She got her chance in 2012 when she heard of a situation in the coal country of Eastern Kentucky of horses in need of help.

A group of 11 free-roaming horses were collected in Knott County and were being held as strays by authorities. At the time, the “stray hold” period for equines in Kentucky was 90 days—which is an extremely long time and very costly for most cash-strapped rescue or animal control organizations. 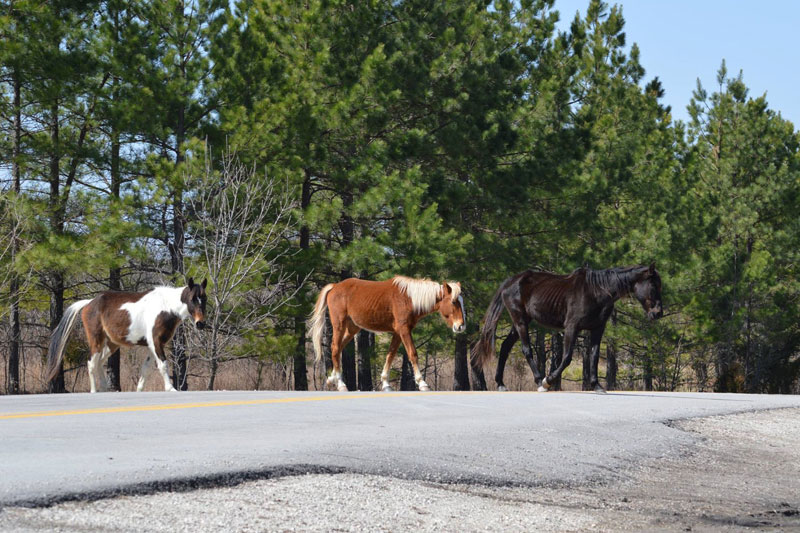 Horses have moved into roadways and populated areas as they are crowded out of the grassy reclaimed mines.

Lori learned that these horses were picked up by authorities because they posed a risk to public safety—they had been in the roadway and had become a threat to motorists. Lori became very interested in helping horses such as these, that were loose and in potential danger. She was missing the hands-on part of horses and was hoping to foster a few of the 11 that had been seized.

She realized at this time that there was no formal, statewide network of equine rescue or adoption agencies to assist animal control or other county authorities, and many times these entities were not trained in how to care for the horses, nor did they usually have the resources with which to care for them.

The Horses of the Mine Lands

About this time, Lori began to hear more and more rumblings about the free-roaming horses in both Breathitt and Knott Counties. She heard from multiple people that there were hundreds or even thousands of them. Becoming increasingly concerned about the horses’ welfare and intrigued about the true number of free-roaming horses, she arranged to go to Eastern Kentucky and see for herself what was really going on. 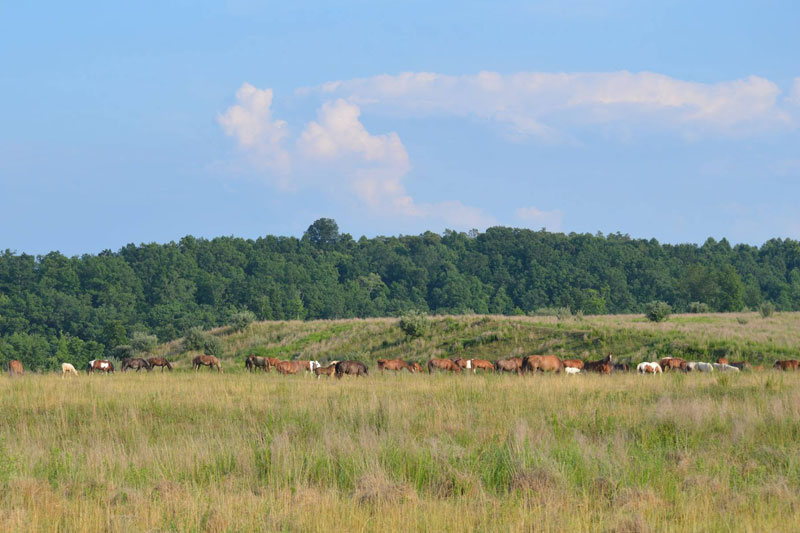 Hundreds of horses roam the former coal mine lands of Eastern Kentucky.

What she found was staggering. Hundreds of horses had been turned out on to land owned or leased by coal companies that was in various stages of being reclaimed. “Mine reclamation” is the process of restoring former coal mines back to a natural or economically viable state. It is required by law and reduces the environmental effects of mining.

These horses are not wild; they were originally owned by someone and have been turned out on the land to survive on their own. Many are approachable and some are caught periodically to be ridden by their owners. Others have been completely abandoned by their owners. New generations of horses are being born on these lands and have never been handled by humans. 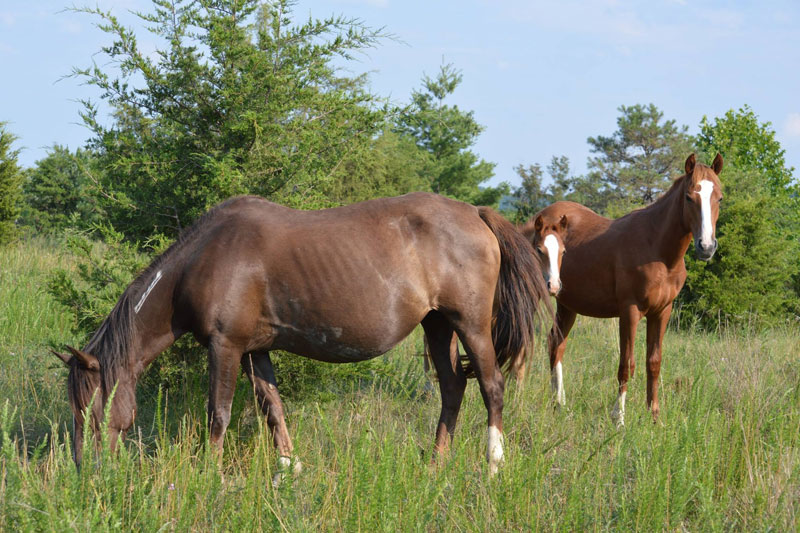 The first generation of horses are primarily domesticated animals. Some are easily approached and are brought back home by their owners periodically.

When Lori made her way to these lands in March of 2014, she and some volunteers covered a five-county area, with the majority of the volunteers focused in both Knott and Breathitt Counties, where she had heard the stray horses posed a significant problem.
The group counted 438 horses roaming the reclaimed mine lands—and those were only the ones that were easily visible. The vast majority of the mares appeared to be pregnant or have foals by their side. When she returned in June her assumption of mares being in foal was validated with an increased number of foals. In fact, one of the largest herds observed consisted of 120 horses and roughly 30 foals. 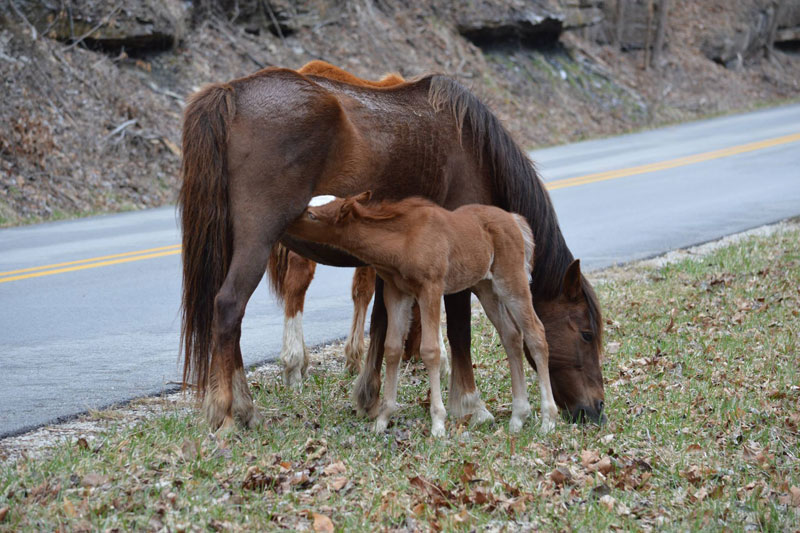 Most of these loose horses were on the reclaimed land foraging for food, but when the grass becomes scarce the horses travel down the mountain into residential areas to look for food or to lick the salt from the roads in the winter. This poses a serious threat to motorists as well as to the horses themselves.
Additionally, the horses have reportedly been chewing the siding of homes, licking salt off cars, destroying landscaping and causing traffic accidents as they wander free.

Upon seeing just how large the issue was, Lori went into problem-solving mode and felt very strongly that it was time for Kentucky Humane Society to become involved.


Where Did the Coal Mine Horses Come From?

For the past 20 years or so, local citizens, many of them miners, would release their horses out onto the land that was being reclaimed by the coal mining companies. In the beginning, the horses didn’t pose a safety issue to people in the town or on the roadways. There was enough pastureland to sustain the number of horses, and many horses were collected during winter months and fed supplemental hay at home. There was a “gentleman’s agreement” (an unofficial understanding based upon trust) that only mares and geldings were turned out on the lands to prevent unwanted breeding of mares. 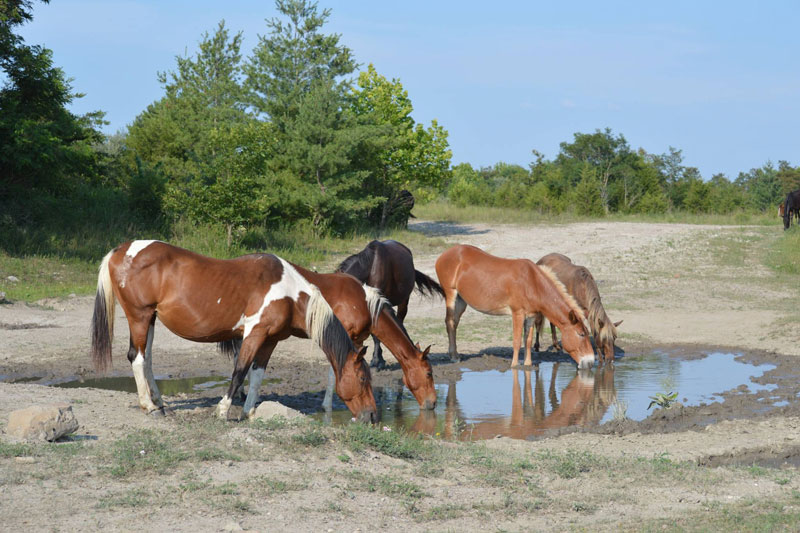 With more horses left on the land, resources are becoming more scarce.

The horses could then be caught and brought back to homes and farms when the owners wanted to ride them.

When the recession came in 2008, more and more horses were being turned out onto the mining lands (for reference, mine sites can up as large as 20,000 to 40,000 acres of land) increasing grazing stress onto the limited grass lands. Additionally, fewer horses were being gathered at the end of summer to go back to their homes. People began to travel from farther away to dump horses on the mine’s land. Some left stallions that bred the mares, leading to unplanned and unwanted foals that were feral because of their lack of human contact. The population of these free-roaming horses began to outgrow the ability of the habitat to sustain them. 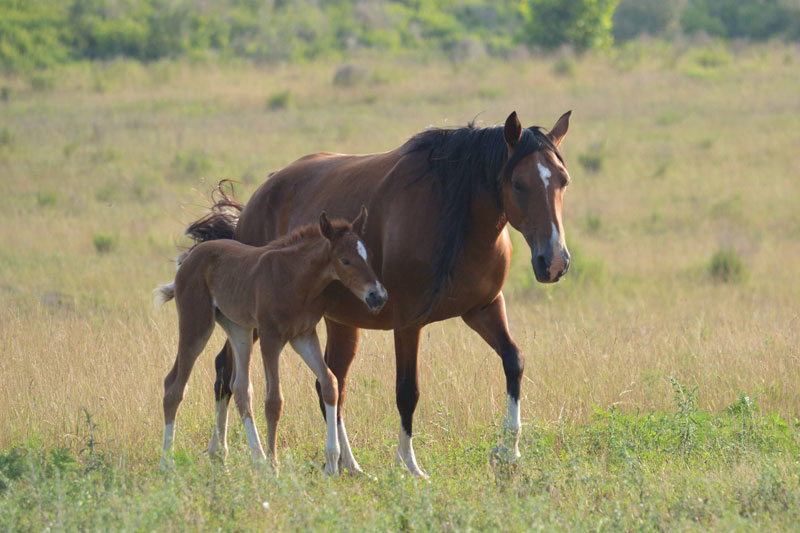 With the introduction of stallions to the coal mine herds, many unplanned foals have entered the picture. These second-generation mine land horses have had little to no human contact.

Some of the horses on the land are now becoming emaciated as feed sources dwindle; they have health and medical issues that are going untreated because of the lack of veterinary and farrier care. As many of the offspring of the domesticated horses are now feral, it makes care or rehabilitation increasingly difficult.

The Kentucky Humane Society’s mission is to “advocate the humane treatment of animals through leadership and proactive solutions to overpopulation.” The organization tries very hard to address the issues before they become a crisis.

Lori recognized that while there were organizations in place within the state to care for breed-specific horses in crises (mainly Thoroughbreds and Saddlebreds), there were very few entities to help the unregistered, companion or unwanted horse and they were stretched beyond their capacity for care.

In the Fall of 2014, the Kentucky Humane Society incorporated helping horses into its mission. They launched an official equine program in February of 2015 and they’ve been off and running ever since.

With so many facets to equine welfare and rescue, it was important for KHS to narrow it’s focus on their core mission: to reduce overpopulation. The issue of the free roaming horses in Eastern Kentucky was a perfect fit.

While horses turned out on coal lands is not specific to solely Kentucky, it is fairly regional, including Appalachian West Virginia, Tennessee and a bit of Southern Ohio.

The first huge success for the KHS equine team came in the reduction of time required to hold stray equines before they can be sold or adopted. This time frame was reduced from 90 days to 15, a huge accomplishment for both KHS and for the horses. This new law went into effect on June 24, and KHS took a leadership role in getting this legislation passed.

The goal for this project is to gradually reduce the number of free roaming horses through gelding initiatives and the placement of unwanted horses into rescues for ultimate adoption. The reduction of the stray hold period will help in the short term as it will allow KHS and other rescue agencies, when asked for assistance, to help horses in immediate danger to themselves or others. 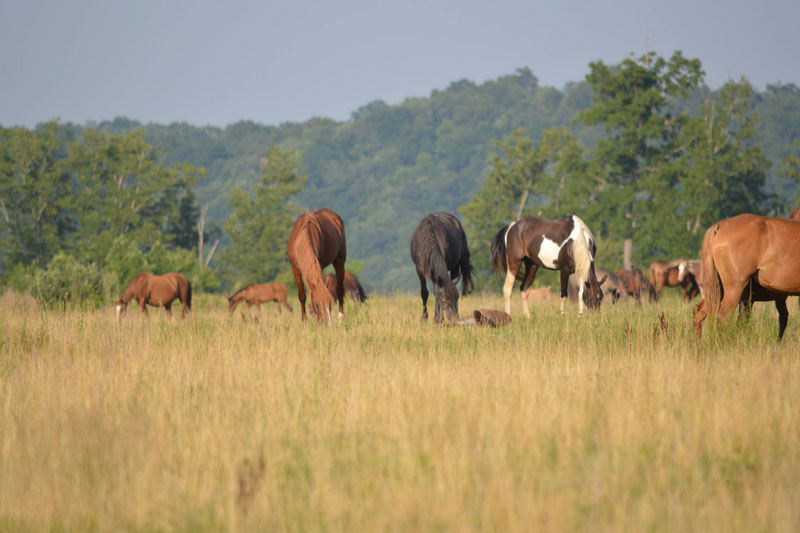 Lori and the team at KHS have completed countless hours of research to find out how to better help the horses in Eastern Kentucky. It’s a complex situation and the majority of the local horse owners don’t want the horses completely removed. In an effort to respect the wishes of local residents, KHS plans to work with horse owners who can identify which horses are owned and which are truly abandoned and in need of help.

KHS is working in partnership with the Kentucky Equine Humane Center and the ASPCA to provide free “gelding and wellness clinics” where owners can bring intact males to be castrated; they also offer other services such as deworming, vaccinating, teeth floating, hoof care and the registering of a Coggins test and health certificate. All of these are offered to local residents at no cost.

The first gelding clinic was held on May 9th in Floyd County, KY and was a resounding success. KHS and their partner agencies, along with a dedicated group of volunteers, gelded 27 horses in one day. Two more clinics are scheduled in Eastern Kentucky for September 12th and October 10th. The location is yet to be determined. 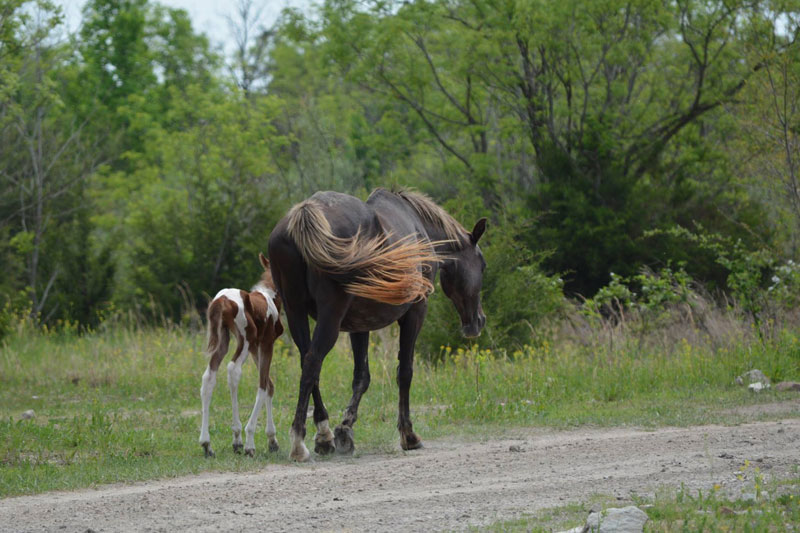 For more information on the gelding clinics or to stay informed and up to date on the issue of free roaming horses in Appalachia, please visit the KHS website at kyhumane.org/horses and on Facebook at facebook.com/khsequine.

Sarah Coleman has a soft spot for chestnuts with chrome, including her off-the-track Thoroughbred that she competes in the hunters. Based in Lexington, Ky., she is the Director of Education and Development for New Vocations Racehorse Adoption Program. 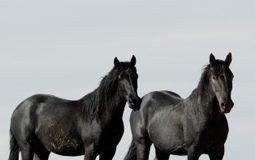