A voluntary recall has been issued by Louisburg, North Carolina-based Murphy Farm Hay and Feed Company. The company is recalling its alfalfa hay due to the possibility of blister beetle contamination after a sample tested positive for cantharidin. Cantharidin is a poisonous substance found in blister beetles and may be the cause of the death of six horses. Horses are most susceptible to this toxin, though it also may affect goats, sheep and cattle. Hay contaminated with cantharidin may or may not contain visible beetles.

The recall affects the alfalfa hay that was sold to North Carolina consumers at the Murphy Farm Hay and Feed in Louisburg as well as the Jones Farm Hay and Feed in Middlesex. These retailers have been instructed to immediately stop selling the recalled product and to notify customers who may have purchased it. The North Carolina Department of Agriculture determined that the source of the blister beetle contamination is to be a single load of alfalfa hay that originated in Kansas and was delivered to Murphy Farm Hay and Feed on August 11, 2015. Hay from the contaminated lot is described as being square-baled alfalfa hay bound in reddish-orange twine; it weighs about 70 pounds.

Anyone who has purchased the Murphy Farm Hay and Feed Company’s alfalfa hay from these locations should stop using it immediately and return any unused portion to the place of purchase. They should also monitor their horses closely for signs of blood in the urine, colic, dehydration, depression, diarrhea, elevated temperature, increased heart rate and respiration, inflammation, straining and sweating. If these signs are observed, contact your veterinarian immediately. Blister beetle poisoning could lead to death, which may happen within just a few hours to up to three days.

For more information about this recall, contact Will Murphy with Murphy Farm Hay and Feed Company during business hours at (919) 496-4646 from 7 a.m. to Noon EST Monday through Sunday or (919) 495-3875 outside of regular business hours. 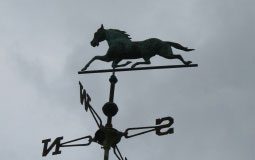