We’ve seen horses bond with a penguin, baboon, dog and even a pigeon. Now, at the Miniature Pony Centre in Dartmoor, England, another unlikely friendship has formed. This time it’s a Shire horse and a mini donkey.

The Daily Mail reported in May that the donkey foal, named Eros, stood 21 inches tall and was very excited to meet his equine counterpart, Uncle Buster – a horse who happened to stand much taller than Eros at 16.2 hands. A spokesman for the Miniature Pony Centre told The Daily Mail, “As we are all one big happy family at The Miniature Pony Centre we thought it was time for him to meet Uncle Buster, our resident shire horse. True to form, our little donkey ran straight up to him to give him a kiss. Buster may be gigantic compared to his little friend but he is the gentle giant of the horse world and gave him a lovely kiss back.”

Now that Eros is a little older, he has a better understanding of the differences in size between him and the gentle horse, but that does not stand in the way of their friendship. Check out the photos the Miniature Pony Centre posted on its Facebook page:

Have any of your horses formed an unlikely friendship with any of your other animals? Post a photo on the Horse Illustrated Facebook page. 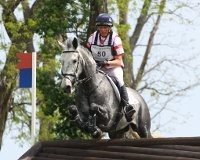 Watch the 2012 Rolex Kentucky Three-Day Event from anywhere in the...